SLOVAKIA’S Interior Minister Robert Kaliňák received a certificate of appreciation from the US Secretary of State John Kerry for the “sustained record of excellence in advancing international cooperation in the global fight against terrorism” on March 9. 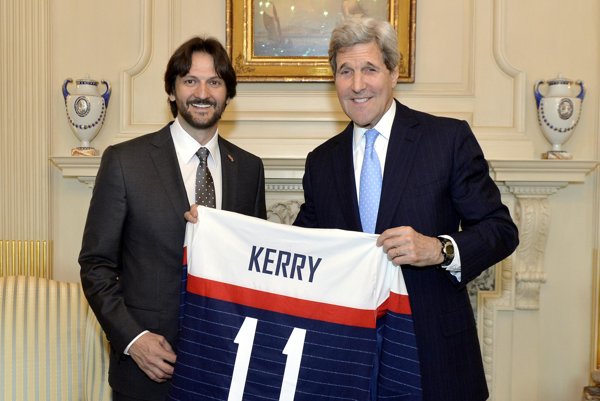 The meeting took place based on Kerry’s invitation at the US Department of State in Washington, the Slovak Interior Ministry informed in a press release.

“For Slovakia’s sustained record of excellence in advancing international cooperation in the global fight against terrorism,” reads the text on the certificate. “Your resolve and dedication have enhanced US-Slovakia collaboration in the fields of law enforcement and counter-terrorism, and strengthened our collective safety and security.”

Kerry also highly appreciated the cooperation with Slovakia and Kaliňák himself “as an active and responsible ally”.

The Slovak minister confirmed Slovakia’s interest in sustaining the high level of bilateral relations with the US and in collaborating in the fields of security, foreign policy and the fight against corruption.

Security analyst Ivo Samson says that the appreciation relates to how Slovakia acted in fighting terrorism in domestic as well as foreign policy.

“I think that Robert Kaliňák was praised also for the successes of the previous cabinets,” Samson told the Pravda daily. In this respect he mentioned the country’s participation in the operations in Iraq and Afghanistan and also its will to stay in Afghanistan.

The March 9 meeting in Washington was also attended by US Ambassador to Slovakia Theodore Sedgwick and Deputy Assistant Secretary for European and Eurasian Affairs Hoyt Yee.