Anti-NATO Protesters gather in front of U.S. Embassy in Bratislava

AROUND 400 people gathered front of the U.S. Embassy in Bratislava shouting slogans: ‘We don’t want NATO, we want peace’ and ‘No to military bases’ on March 12, the TASR newswire reported. 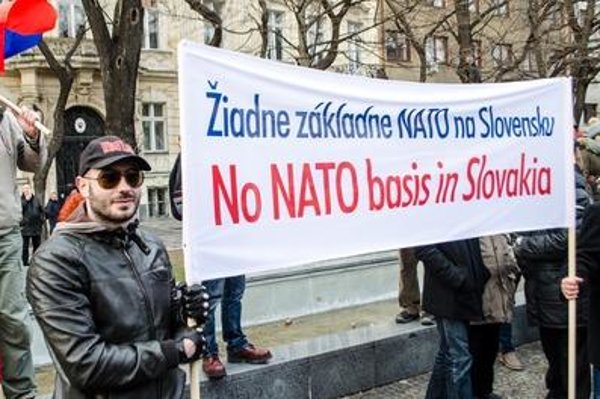 Slovakia have officially asked NATO to create Force Integration Units (NFIU) contact team counting around 40 people, with half of them slated to be Slovaks, Defense Minister Martin Glváč told the press on February 6. He added that it is just team of planners.

Former prime minister Ján Čarnogurský came to support the protest against placing NATO military bases in Slovakia and what the demonstrators alleged biased reporting on the situation in Ukraine.

“If it hadn’t been for the NATO enlargement to the east, there wouldn’t have been any Ukrainian crisis,” Čarnogurský told the crowd, as quoted by TASR, adding that Slovakia should not get involved in a conflict that does not concern it.

Further speakers were Media Academy rector Eduard Chmelár and university professor František Škvrnda. Some people held Slovak flags in their hands, while there were also protesters with banners such as the one reading ‘NATO divides Slavs’.

The organisers have announced that another protest will take place in front of the embassy on March 26.