IN THIS nice postcard from 1920s, we can see the village of Vyšný Slavkov surrounded by the Levočské vrchy hills. The image is a good illustration of how Slovakia – and not only the one around Vyšný Slavkov – likely have looked completely differently than it does today. 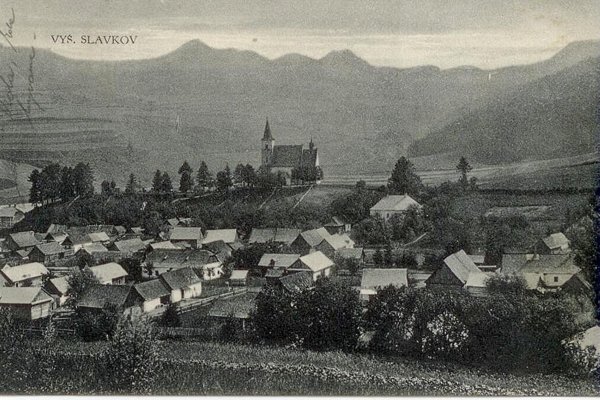 For example at the site called Sihoť, between this village and the municipality of Poľanovce, a pilgrimage Church of the Transfiguration stood since the end of the 16th century. Remains were uncovered by archaeologists during research last year.

Experts were surprised by one wooden column in the otherwise brick-and-stone church. This is a rarity in the modern-era of mortar sacral buildings. Ruins of the church stood as late as mid 20th century, when they were broken down and used to construct local agricultural cooperative.

Apart from the church, another village – Leletkov – of which there is no trace now, used to be set in the Slavkov area. And last but not least, military surveyings from 1769 and 1821 show that there were also two ancient fortified settlements to the southeast of the village.

If someone could see a birds-eye view of Slavkov from 1,000 years, we would be rather surprised how it would differ from today’s. We would see Romanesque churches which collapsed some time in the Middle Ages, innumerable predecessor castles – fortified settlements whose presence is reflected only by obscure land protrusions here and there now — as well as perished villages that later either merged with other settlements or vanished without any trace.