SLOVAK band Fallgrapp dominated the Radio_Head Awards ceremony on March 15 in the Old Market-hall in Bratislava. The seventh year of this award, bestowed by the Radio_FM state radio station, saw Fallgrapp take a total of four statuettes with radio-shaped heads to their hometown, Dubnica nad Váhom. 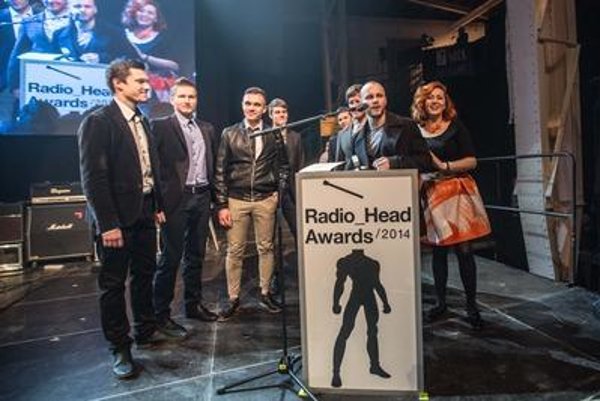 Of these, three – The Album of the Year, the Debut of the Year and the Electronic Music Genre – were given for their debut album Rieka (River), while the fourth – The Single of the Year – was for the song Vlasy (Hair) from this album.

The Discovery of the Year is a performer called FVLCRVM, the reviewers’ prize for the Album of the Year goes Jana Kirschner for her album Moruša Čierna, The musical feat of the year is the 40th year of the Bratislava Jazz Days festival.

Jureš Líška, founder and leader of the Fallgrapp band, together with the other eight members of the troupe did not hide their joy and enthusiasm from four awards, “When we released the CD, I said that if we managed at least one nomination we would be very happy,” he said, as quoted by the TASR newswire. “I would be personally glad and rejoicing, and I have not expected this at all – you can never know how people will accept you.”

Nora Ibsenová, the only woman among them, added that she was shocked, as there were well-established personalities from the musical business they personally admire. Líška said that they want to add some more new, unknown songs, and play concerts around Slovakia – as many as possible.

Radio_Head Awards are musical awards that appeared as natural opposition to the Slávik a Aurel popularity awards. Rádio_FM has given in 2008 chance for “a different music than known from the commercial, mainstream media”. Thus the “Radio Heads”, the seventh year of which culminated on the evening of Saturday, March 14.