PRIME Minister Robert Fico announced that the state was assuming full control over the Gabčíkovo hydroelectric power plant on March 9, and presented the change as a means to partially redress what he sees as the unfair privatisation of Slovenské Elektrárne (SE) in 2006. 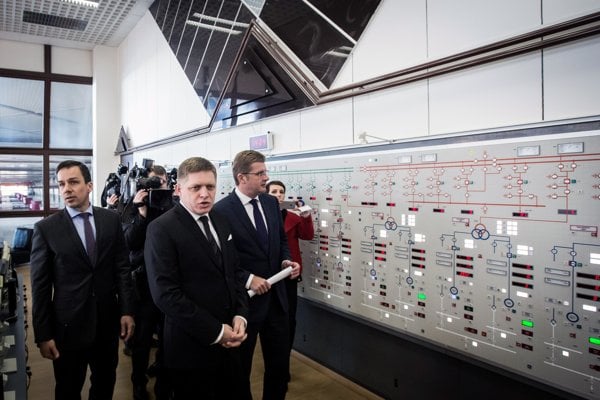 Prime Minister Robert Fico arrived in person at the Gabčíkovo hydropower plant on March 9 to announce that the state was taking over control of the facility. (Source: Sme)
Font size:A-|A+

“I have good news for Slovakia because today at the special cabinet session we carried out further legal steps on whose basis I can say that we are taking back full state ownership and full control of the Gabčíkovo hydropower plant,” Fico said, as quoted by the SITA newswire.

The state terminated the contract for operation of the Gabčíkovo hydropower plant in December 2014 and the state takeover was scheduled for mid March.

State-run Vodohospodárska Výstavba took over management of the hydropower plant on March 10 from the country’s largest electricity producer, SE, which is majority owned by Italian firm Enel.

Meanwhile the Regional Court in Bratislava decided on March 9 that the contract for operation of the Gabčíkovo hydropower plant is invalid because instead of a direct agreement with SE, a public tender should have been announced. SE, which argues the contract remains valid, has said it intends to challenge the verdict and seek compensation for lost profits.

It is expected that this legal dispute as well as others pertaining to SE’s privatisation and the lease of Gabčíkovo, which has annual revenues of about €100 million and costs of between €8-10 million, will continue.

The Gabčíkovo hydroelectric plant is the Slovak part of a failed communist-era Slovak-Hungarian twin-dam project on the Danube. It was hoped that the two dams, a project launched in 1977, would work together to provide electrical power, limit flooding and improve the navigability of the River Danube.

Hungary terminated the treaty in 1992 against the will of Slovak officials and in 1993 the case was brought to the International Court of Justice in The Hague, which ruled that both sides had breached the contract and that the contract was still valid. The dispute between Slovakia and Hungary continues.

Based on valid contracts the Gabčíkovo hydropower plant should have remained state property and was excluded from assets of SE allocated for privatisation. When Enel acquired 66 percent of SE assets, it also signed a 30-year contract to operate Gabčíkovo. This meant that the plant remained state property, but was operated by SE – which also sold the electricity generated by it.

SE sent 65 percent of the revenues to Vodohospodárska Výstavba (VV) and kept the remaining 35 percent. From this money it financed repairs, maintenance and paid the wages of Gabčíkovo’s employees. SE also paid a €5 million rental fee to VV and an additional €5 million to Slovenský Vodohospodársky Podnik each year.

Fico has been criticising the sale of the majority stake in SE for €840 million to Enel as well as SE’s contract to operate Gabčíkovo for 30 years. He portrayed the lease contract as invalid and harmful to Slovak interests. The situation culminated last December when his government terminated the contract. Fico listed three main reasons for doing so. He said SE had failed to provide data to Vodohospodárska Výstavba, necessary for it to calculate its share of the revenue from the sale of electric power from the Gabčíkovo plant. He further said that SE had not prepared any plan for the reconstruction and general overhaul of the plant. Finally, he alleged that Enel was not fulfilling its obligation to pay €5 million a year to Slovenský Vodohospodársky Podnik, which manages the whole Gabčíkovo project. SE denied all the allegations.

Meanwhile, the Public Procurement Office (ÚVO) has also alleged that the lease contract was invalid, and challenged it in court as early as in 2007, arguing that when the contract was signed, some regulations of the law on public procurement were violated. The Regional Court in Bratislava decided on 9 March this year that the contract for operation of the Gabčíkovo hydropower plant is invalid, because instead of a direct agreement with SE, a public tender should have been announced.

According Fico, the verdict of the invalidity of the contract “enables us, and we will do it, to demand from [SE’s owner] Italian company Enel all money that it has ‘drawn’ from Gabčíkovo”. According to him, every year Enel has supposedly gained €35-€40 million through operation of the power plant.

Fico recalled that his cabinet has reiterated that the contract is invalid and that the lease has damaged the economic and financial interests of Slovakia.

SE says it will challenge the verdict.

“Slovenské Elektrárne with respect to today’s verdict of the Bratislava Regional Court on invalidity of the contract for operation of the Gabčíkovo hydropower plant announces that it will use extraordinary appellate means immediately after it officially receives the verdict of the court and its justification,” SE spokeswoman Janka Burdová said. “Our company is convinced that the contract is valid, as confirmed by the first-instance court on November 19, 2013.”

Following the termination of the contract, SE is preparing to ask the state for compensation, as the original contract was signed for a 30-year term.

According to Fico, the fact that the court ruled that the lease contract was invalid enables the state to ask for all revenues SE received from Gabčíkovo. He announced in parliament on March 12 that the state wants €350 million from SE, the TASR newswire reported.

On the other hand, the state should compensate SE for operating costs, lawyer Andrej Leontiev, a partner with TaylorWessing, told the Dennik N. Leontiev also indicated that since it was the state which had to announce a public tender for operation of Gabčíkovo, the second party in the conflict might be compensated for damages caused.

Michal Hudec, CEO of Energy Analytics, added that apart from 100 percent of revenues of Gabčíkovo, the state is also taking over 100 percent of the costs of operation, maintenance and other activities linked with operation of the hydropower plant. One of these is the expected overhaul of Gabčíkovo’s turbines, with an estimated price tag of €80 million. While before the termination of the lease contract it was SE who would have decided about this order, now it will be the state via VV.

The recently established opposition SKOK party, led by former economy minister Juraj Miškov, has called on Fico to guarantee that VV carries out a proper and fair international tender. In this way, it says, Fico should rebut suspicions that the real motive of the Smer government in taking control of Gabčíkovo is to award its nominees control of this lucrative order, TASR wrote.

Ladislav Lazár, director of VV, said the tender might take place later this year in order that the general overhaul can start in 2015. Lazár criticised SE during a discussion programme on the TA3 news channel on March 15, saying that it has not carried out needed repairs even though this was one of its duties. The overhaul is planned to take six years, he said.

The opposition Freedom and Solidarity (SaS) questions whether it is necessary to overhaul the turbines so quickly. Karol Galek from SaS recalled that the start of the overhaul is planned for the year before an election, TASR wrote. He further pointed out that Gabčíkovo has eight turbines, but out of these only two or four are actually operating because Nagymaros, the second, Hungarian part of the twin-dam project, was never completed. He calculates the costs of overhauling one turbine at €15 million, so repair of all eight would cost €120 million. SaS recalled that SE, based on a special general assembly attended also by representatives of the Economy Ministry only last November, planned the overhaul for the first quarter of 2016.

Italy’s Enel is seeking to sell its 66 percent share in SE and the loss of Gabčíkovo, which generates more than 7 percent of Slovakia’s annual energy consumption, may reduce the selling price of Enel’s share in SE.