THOUGH the experts say interest in moving to satellite towns in rural areas near big cities has waned, there are still people longing for their own house with a garden, close to nature and for an affordable price. 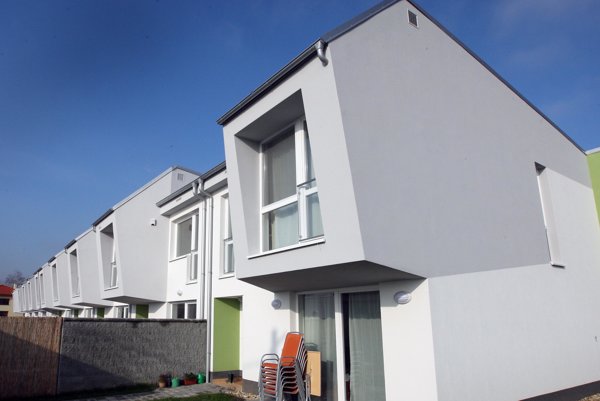 “The advantage [of this kind of housing] is that we have a family house which offers more comfortable living,” Jana Jakubíková, 32, told The Slovak Spectator. She lives in the satellite town of Kalinkovo, some 20 kilometres from Bratislava’s city centre.

Typical inhabitants of satellite towns were once people with higher incomes, but statistics show that at present they are mostly populated by people with secondary school education aged 30-50, and especially families with children, said Imrich Béreš, chair of the board of directors of the Prvá Stavebná Sporiteľňa company.

“Better prices play a significant role compared to the city and a higher quality flat or house for the price,” Béreš told The Slovak Spectator.

Andrea Michalcová, 44, who lives in Bernolákovo (22 kilometres from Bratislava), says it was mostly the price which attracted her family to move to a satellite town. According to her, eight years ago the price of a house with a small plot of land was comparable with the price of a flat in Bratislava.

Another reason for moving to the satellite towns is that people are closer to nature and have better possibilities for sports or free time, said Robert Longauer, 34, who lives in Hainburg in Austria.

The first satellite towns appeared in Slovakia in the 1990s. They were built close to Bratislava, but later spread to the surroundings of regional capitals as well. Since 1996 the towns lost some 132,000 inhabitants, most of who moved to the satellite towns, Béreš said.

The peak came in 2000 when several developers started to buy agricultural lands close to the municipalities and transform them into complexes of houses and flats.

“The first decade after 2000 was typical also for the expansion of the terraced houses in several regions of Slovakia,” Béreš said.

Béreš, however, warns that the new inhabitants often do not ask for permanent residency in the municipalities, meaning they do not pay their share of income taxes to the local authorities.

“Then they [municipalities] are not able to finance the necessary infrastructure which the developers do not always build and certainly do not maintain,” Béreš added.

Rovinka Mayor Milan Bombala confirmed this problem to Trend in August 2014. His village however agreed with some of the new inhabitants that they will pay some kind of contribution which equals their share of income tax. He also persuaded two developers who have built the houses in the local satellite town to make a contribution to extension of the primary school, Trend wrote.

The town planners say that a fee for investment activities may be one of the ways to solve the problems with financing the infrastructure in satellite towns.

In summer 2014, several media outlets illustrated the problem of missing infrastructure in Čierna Voda, a satellite town belonging to Chorvátsky Grob (24 kilometres from Bratislava). Among the problems was the insufficient sewer system, the gap between the new and old parts of the town and conflicts which resulted in tensions between the old and new inhabitants, according to the reports.

A return to cities

People addressed by The Slovak Spectator consider the community amenities in the satellites they live in appropriate, though often less developed as in the bigger cities. Often there is a small shop, post office, kindergarten, school and a doctor. On the other hand there are few possibilities for cultural life and residents must often travel to the nearby bigger town or city.

“Most people also keep doctors in the city centre, though they move to the satellites,” Longauer said.

The main problem cited by both Jakubíková and Michalcová is the resulting traffic. Though they live relatively close to Bratislava, they still spend hours in traffic jams.

“Eight years ago commuting was one of the advantages, but since then the situation has radically worsened as the number of people moving to satellite towns increased,” Michalcová said. “The roads, however, have been neither widened nor enlarged, so their capacity remains the same.”

The problematic transport and the fact that children still go to schools in bigger towns and have other activities there is seeing some families with schoolchildren move back to the bigger cities, Béreš said.

However, he does not expect that satellite towns will cease to exist, rather that people will be more careful when analysing the reasons to stay in the main city or town or move to a satellite town, Béreš said.

Since there are still people who prefer the rural way of life rather than the bustle of the city, the trend of moving to satellite towns may continue for 10-15 years, he added. One of the reasons is that Slovaks live in their own accommodation rather than in rented flats or houses.

“If municipalities will care about observing and developing their land plan, and will approach it effectively so the satellite is not a burden for inhabitants, then this way of housing and lifestyle should not experience major problems in the coming years,” Béreš concluded.

Nevertheless Bombala stressed to Trend that every village needs to control growth in order to secure the services residents need.

This article is published as part of Spectator College, a programme created by The Slovak Spectator  with the support of Petit Academy Foundation. A glossary of words as well as an exercise related to this article are also published online.