Owners of dogs will not bear legal responsibility

THE SLOVAK parliament turned down the draft amendment of the Criminal Code, proposed by Most-Híd MPs Gabriel Csicsai and Lucia Žitňanská that strived to introduce a new state of facts for crimes of bodily harm for people responsible for a dog that bit or injured someone. 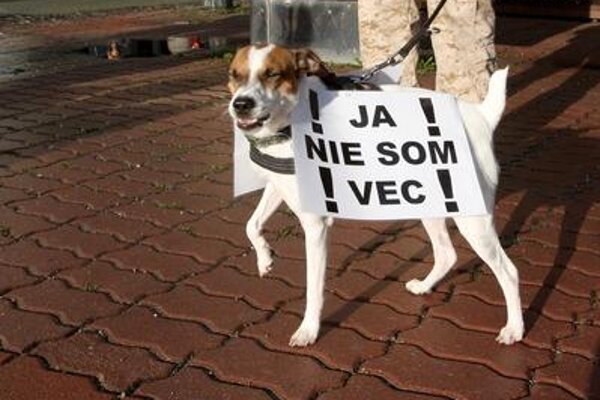 I am not a thing. (Source: Sme)
Font size:A-|A+  Comments disabled

The fact that persons legally responsible for a dog have no responsibility for violating their duties leads to their unconcerned stance – although their reluctance can result in damage and injuries, the MPs argued. However, parliament refused their proposal in mid December.

They wanted to introduce a sentence of up to one year in prison for anyone whose dog attacks a person, a pet or livestock and of one to five years if the attack is against several people, or if it leads to grave harm or death. An attack against an animal shall bring a sentence of six months for the owner or responsible person.

The draft bill controlling the breeding of dogs, tabled by Freedom and Solidarity (SaS) MPs Martin Poliačik and Lucia Nicholsonová was also refused on December 11; it strived to ban any unregistered reproduction of dogs.

The third, most debated proposal filed by SaS tried for the law to re-define an animal as a live being, unlike the current state in which it is considered a moveable item and its individual features are not respected. This proposal evoked a strong emotional debate and protests by environmentalists, but was swept off the table as well, the SITA newswire wrote.