Romeo and Juliet staged in SND

WILLIAM Shakespeare is an unfailing inspiration for many artists, including opera composers. His Romeo and Juliet was the basis for several, including one by Frenchmen Charles Gounod. The Slovak National Theatre (SND) is set to produce it for the first time in its 95-year history. 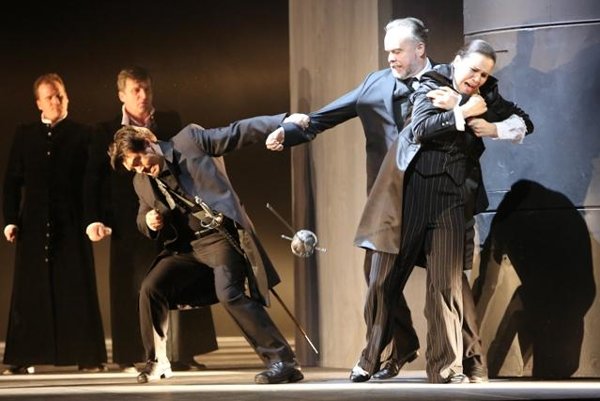 “Shakespeare is such apt material for musical works because of its structure, its composition – it is also other writers in drama who used Shakespeare,” Diego de Brea, the Slovenian director of this staging, told The Slovak Spectator. “Because of the plot, the conflicts among the characters, just like Dostoyevsky… In contrast, modern texts are veristic and do not open the ontological themes; they open just small cuts of life.”

De Brea has previously directed two drama pieces for the SND and received the Slovak Dosky award for his staging of Coriolanus, also emphasised that in his view the plot of Romeo and Juliet is not as much a love story of those two as it is a conflict between her father’s power ambitions, including his selected match for her husband, and her free unyielding spirit that desires for a love and a partner selected on her own.

Moreover, de Brea likened the crucial conflict between two rivalling families to a fight for power and for keeping it – “imagine two families ruling the whole city state of Verona, something like Putin and Medvedev are in today’s Russia”, he said at the matinee on March 1.

The SND’s Romeo and Juliet is conducted by Rastislav Štúr. “I try to stick to the model and the score as much as possible, it should be played very sensitively, beautifully,” he told the SND’s monthly magazine. “It is an opera based on the solo parts to a big extent.”

De Brea said that apart from the fact that the original story is rather a story about the family conflict, power, opportunism and political weddings, or about infatuation that lasts for only few days – and not about love – it is the “smaller” characters like Father Capuleto, Thybault or Mercuzio who pull the strings of fate the main characters, Romeo and Juliet. 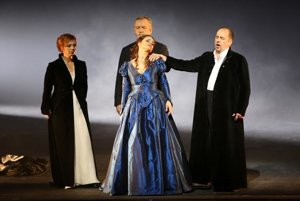 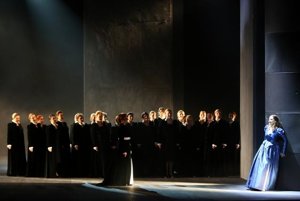 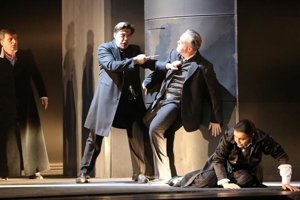 Romeo and Juliet in SND (4 photos)

Unlike the big operas of Giuseppe Verdi, Gounod’s version is more intimate, more focused on the conspiracies, the relations among the characters and the impossibility for the lovers to develop their relationship, or even to be alone and enjoy it fully. Gounod’s version has only been staged once before in Slovakia, at the Zvolen Castle Plays.

“For me, it was interesting that the music is lyrical and romantic, the situation is dramatic,” de Breas said at at the press conference. “There are three crucial issues in it: war, faith and love.”

The scenery made, by Slovenian Marko Japelj, is sophisticated but minimalist, putting all the focus on the happenings and the actors. The complex cordage and the hanging balcony offer a great background for one of the crucial scenes. The costumes by Blagoj Micevski are also neutral and low-key.

What is even more sophisticated is the lighting – “only the lights and the fog took 60 hours to make,” de Breas said.

“At a certain level, opera is even harder than drama,” he told the Slovak Spectator, “as it is more limited by music. Modern opera does quite the contrary to what the music says, but for me, it is impossible as you must follow the dramaturgy of the music. You cannot escape it, you must be very precise because music tells all the structure of the dynamics.”

Opera singers often know where they are supposed to go and what they should sing, while not knowing what the conflict is and where it is leading, de Brea said, but he praised the Slovak cast and added that they were able enter the story, rather than to tell or approach it from outside.

“This brings the crucial question of art and its performing – are we experiencing and living it, or just illustrating and showing it?” de Brea said.

This opera is sung in French and returns to the SND stage on March 19, April 2, May 17 and June 20 this theatre season. More details are available at www.snd.sk.