DESPITE an outcry from students and schools in the wake of the written section of the school leaving exams, authorities claim that the tests were not significantly more difficult than they have been in the past. 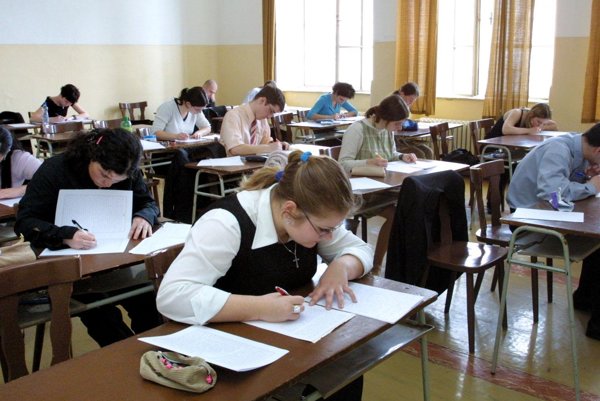 In the last decade, however, the rules for school leaving exams have changed several times, and further changes are also expected next year. Some 50,000 students from together 729 schools underwent the written part of the school leaving exam in mid-March.

Most complaints focused on the math section, saying it was difficult than in previous years and that students did not have enough time to solve the tasks. Math teachers confirmed to the Sme daily that the test was different from the previous one and though the problems were fine, some were time-demanding.

“The math test is the distinguishing test,” Ivana Pichaničová, acting head of the National Institute for Certified Educational Measurements (NÚCEM), told Sme when commenting on the complaints. “There is no reason for it to contain tasks which nearly every student will solve.”

Students interested in math who want to continue studying it at university should successfully solve 11 of 30 test tasks, she continued.

She also stressed they did not tighten testing criteria, and that this year’s tests do not exceed the requirements set in respective documents. The test contained the tasks which in the pilot testing achieved the average success rate at about 50 percent. NÚCEM excluded the tasks where the success rate was more than 80 percent, which may then result in the feeling of students that the exam was difficult, Pichaničová added, as reported by Sme.

“The relative difficulty of the tests should be left to experts who set it in the way to measure what they should measure, and to make it possible to distinguish various levels of knowledge of students,” Ctibor Košťál, head of the Slovak Governance Institute (SGI) told The Slovak Spectator.

It is obvious that the students only rarely encounter the tests where nobody achieves 100 percent, and where the average success rate is between 75 and 80 percent. Therefore they are surprised when they get let’s say about 90 percent, he added.

From his point of view, it is important that the tests are understandable and comparable to  ordinary tests of students’ knowledge to which they are accustomed.

“This is however a field which requires also some changes by schools and the way how the students are tested and evaluated,” Košťál said.

It is subjective to compare the results from previous years, Pichaničová said.

“Students solve the already published tests at home and together at schools with a certain success rate,” Pichaničová explained. “It is however different to solve the test on their own, with certain amount of stress.”

The rules for school leaving exams have changed several times in recent years. Next year will be no exception as the Education Ministry plans to respond to the complaints of teachers that students do not have enough time to solve the tasks or check their answers, the Pravda daily wrote.

The ministry proposes to prolong the tests from the Slovak, Hungarian and Ukrainian language and literature from current 90 to 100 minutes. Moreover, those taking the math test will have 150 minutes, 30 more than now, according to the proposal which was submitted to the interdepartmental review.

If approved, the changes may come into force as of September 1, 2015, the TASR newswire wrote.

Further modifications may be expected as of the 2016/17 school year. Those doing tests from foreign language on C1 level will have 150 minutes for the testing part of the exam, 30 minutes more than now. They will get another 30 extra minutes to write a longer piece, TASR reported.

“Frequent changes and instability of the system are not suitable and it is necessary to have clear and understandable criteria for evaluating the students’ knowledge,” Košťál said, adding that this “requires an agreement on what the school leaving exam should be and how we want to use its results”.

Koštál himself supports the standardised evaluation of knowledge and removing the subjectivity from it, which occurs during the oral part of the exam. It is however necessary to be careful when interpreting the outcome of the standardised tests which may lead to incorrect conclusions, he added.

The results of testing from the Slovak language and literature will form the base of how schools will learn more about the progress of their students, the SITA newswire wrote.

The so-called added value of education will be set as a difference between the real success rate of the student on the test and the expected one, which will come as a result of the average success rate of all schoolchildren in the tests for ninth-grade and their results for years later, SITA wrote.

“This indicator will offer the schools better feedback than the exact result of the testing part of the school leaving exam, as it takes into consideration also the level achieved by the contemporary secondary school graduates in ninth-grade testing four years ago,” Education Minister Juraj Draxler said, as quoted by SITA.

The schools will be able to use the information for planning the ways to improve the education, SITA wrote. NÚCEM will reveal the results in June.