WHILE the amount of racially motivated crime is in decline, extremists are adopting increasingly sophisticate ways of spreading their message online, experts say, and the government is taking this into account as it adopts a new policy to combat extremism. 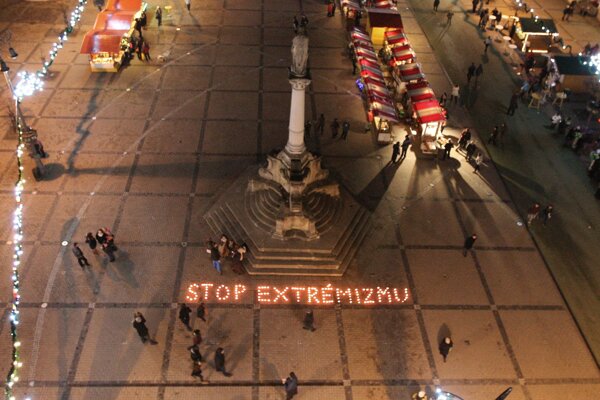 It is hard to prove that extremist groups violate the law in such cases and and they have political ambitions, according to the Conception of Fight against Extremism which government adopted on March 18.

“The development of criminality shows the trend that displays of racist discrimination and other forms of hate crime has been recently shifting from the street to virtual area,” reads the conception.

The number of reported crimes related to extremism is decreasing. In 2014 police reported 40 crimes of extremism in 2013 it reported 64 of such crimes, in 2012 it noticed 49 crimes of extremism. There are exactly dozen extremist groups operating in Slovakia including political parties such as  People’s Party - Our Slovakia (ĽSNS) or sport and paramilitary groups such as Slovak Levies or Action Group Vzdor, according to the government document.

NGOs dealing with extremism approached by The Slovak Spectator say that mere formal punishment and prosecution of such people is not enough. More than anything else, the public and important political figures should condemn such behavior.

“I don’t think that eye of Big Brother should be the main tool against spreading of hatred on internet,” Laco Oravec from the Milan Šimečka Foundation (NMŠ) told The Slovak Spectator.

The internet is a strategic place for extremist groups because they do not have sufficient space in mainstream media. Moreover, especially young people who are more active on internet tend spread those ideas, according to Tomáš Nociar, a political scientist focusing on extremism.

“Of course, using the internet in this regard is nothing new, however this phenomenon became more relevant in recent years,” Nociar told The Slovak Spectator, “because the number of people using internet every day is increasing.”

The strategy proposes to improve cooperation with internet providers to be better in tracking of extremist statements and material spreading via the internet.

The Bratislava Without Nazis initiative currently runs research of statements published on Slovak websites and social networks and there are dozens of them which could violate the law, according to the group. The police however do not prosecute authors of this extremist material so it is questionable how the police work, according to Róbert Mihály, a member of the initiative.

“Just open the Facebook, there are hundreds of such cases there,” Mihály told The Slovak Spectator.

Mihály was one of seven people detained by police during a March 14 march as he and others confronted a group commemorating the war time Slovak state, an ally of Nazi Germany.

While some extremist rhetoric may violate local laws, it can also be difficult to prosecute. On the other hand, the power of police is limited because a large amount of clearly extremist content which could be grounds for prosecution is on U.S. based servers. Slovak legislation does not apply there and therefore Slovak authorities struggle to deal with it, according to Nociar.

The police refuse to describe their methods of fighting with extremism because of tactical reasons, police spokesman Michal Slivka told The Slovak Spectator.

Humor is better than jail sentences

Instead of repression Nociar proposes the public to fight with extremism using humor or rational arguments that make it less attractive for people.

Slovak society however often does not recognize the extremism as a problem. This affects also police when dealing with such cases, according to Oravec.

“We lack the clarity on the certain line between a crime or at least taboo that is crossed,” Oravec said.

Also the voice of political figures should be stronger when fighting with extremisms. Journalists, analysts and NGOs participate on the public debate about this issue but statements of politicians are missing or are evasive, according to Grigorij Mesežnikov, president of the Institute for Public Affairs (IVO) think tank.

“Have you recently noticed a government representative clearly describing his or her attitude towards extremism and not only in form of general statements?” Mesežnikov asked The Slovak Spectator. “To organise a press conference ad hoc after some unpleasant event and then consider the participation on fighting against extremism as complete is insufficient.”

As a part of prevention the government should bolster efforts to educate people about extremism and point to the threat it represents via mass media and schools, according to the conception.

The state underestimated the power of education right after Slovakia joined the EU in 2004 and it does not sufficiently explain to public how much organizations, such as EU or NATO, did for Slovak well being. This is the reason why some Slovaks are keen to believe hoaxes, according to Mesežnikov.

“We should focus on high-quality of education of young people so they will be able to critically perceive and sort information and respond to hatred on the internet,” Oravec said.