Whippings all in good fun as an Easter tradition

IN  SLOVAKIA  old pagan seasonal rituals must have survived the country’s conversion to Christianity, and one need look no further than the Easter tradition of whipping girls and women with homemade switches. 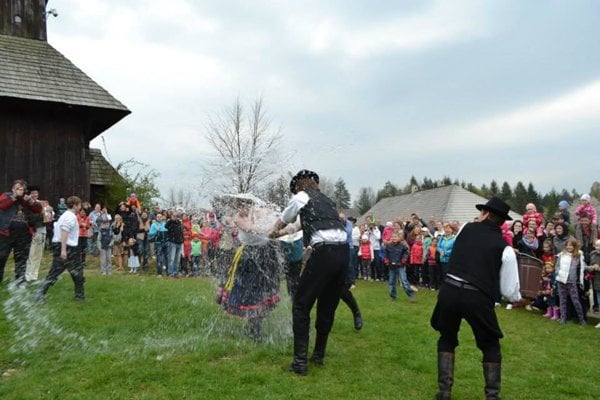 Made from young willow branches, the whippings are followed by a splashing with with water, ideally ice-cold. Both are meant to guarantee they stay young, fit and beautiful all year long.

The tradition became linked with Easter after Christianity came to Slovakia in the ninth century, some sources suggest. But the traditions originated as part of folk beliefs based on nature’s cycle. Though a moveable feast, Easter generally coincides with the arrival of spring, and thus is celebrated as a time of new life and re-birth.

Processions were meant to drive away evil spirits, houses were decorated with vegetation, and whipping and water were employed to ensure a young woman's fertility and beauty. It was believed that the vitality from the young twigs entwined in the whip would flow into the female body. Boys and men were offered decorated eggs – which also symbolised new life.

The ancient rites have changed with the gradual urbanisation of Slovakia, and in the cities, women are rather sprayed with a perfume and symbolically hit once or twice with whatever apt “beating” tool men can find. Eggs given as a reward for their “beating” are often also rather mass-made or chocolate ones, instead of the originally hand-made decorated eggs; the style, technique and ornament used to be typical for each village, town, or region.

The days preceding Easter Monday are generally reserved and religiously oriented, but on this day, as distinctly un-Christian atmosphere breaks out. Starting early morning, males visit their female relatives, friends and colleagues, whipping them with “korbáče” and splashing with water. Instead of being reported to police, they are offered eggs, sweets, cakes and alcohol.

Fire also has a significant role in Slovak traditions. Traditionally an open fire was set in all households and Easter dishes were prepared on it. This custom signified the need for new vitality at the beginning of the agricultural year. Fire also had integral function vis-a-vis clerical ceremonies known as Judas’ burning or bonfire on White Saturday. A fire was lit in front of the church and was sanctified by the priest. The burnt coal and ash were said to have magical power so people placed these with flax and hemp on their fields or put them in their attics to protect against fires.

During White Saturday there were several other customs connected with agriculture, health and protection of one’s home. Preparation of the Easter Sunday meal – ham, eggs, lamb and cakes – began. Fried rolls with poppy seeds or sheep’s cheese and sauerkraut soup were traditionally eaten on White Saturday. Use of the adjective white – the symbol of purity and innocence – comes from a Bible story in which the body of Jesus was wrapped in a white linen burial cloth.

Easter Sunday – the day of Christ’s resurrection – is an opportunity to bless Easter meals and a time for ceremonial fare. After church in the morning, people often walked around their house in order to ensure a good harvest. Before Easter dinner, an egg was also divided among all family members to remind them not to forget each other and to stick together.

For those wishing to try and revive some of the old customs and handicrafts, there are some opportunities today. The ÚĽUV centre of traditional arts and crafts each year offers some workshops of egg decorating, but it is advisable to check whether they can be offered also in English at its website, www.uluv.sk.

The museums and venues administered by the Slovak National Museum also offer some Easter decorations and an insight into Slovak traditions in Martin, at Betliar and Bojnice castles, in the Museum of Ruthenian Culture in Prešov, or close to Bratislava, at the Červený Kameň (Red Stone) castle. More information can be found at www.snm.sk. Some smaller museums or local cultural centres also offer exhibitions of Easter decorated eggs or special Easter whips, the korbáče.

Many cities and towns offer Easter markets with traditions goods and meals, and some places even organise the re-enactment of the Via Dolorosa, Christ’s walk to the crucifixion.

The ski season ends in many resorts around Easter, too, and in Kremnica, a fun event called Easter Egg is organised annually, requiring skiers to masquerade.