SLOVAKIA and its foreign policy have long-time understanding for the ambitions of Turkey to join the European Union,  President Andrej Kiska after meeting his Turkish counterpart Recep Tayyip Erdoğan. 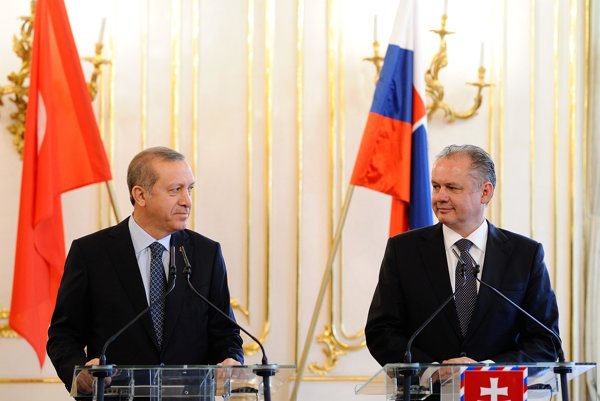 “Turkey is important for the EU and the EU is important for Turkey,” Kiska said, as quoted by the TASR newswire, adding that the country has to be judged during its accession efforts objectively and based on real changes, reforms and meeting the criteria.

The Slovak president also praised the efforts and progress Turkey has recently made.

“Slovakia and Turkey are not only partners, but also friends,” Kiska said, as quoted by TASR, praising the cooperation between the countries in innovations and advanced technologies. “Turkey is perspective and very interesting market for Slovakia and, what is important, it is accessible also for medium-sized and small companies.”

He also praised the abolishment of visas for Slovak tourists, and added that Slovakia still has to learn much from Ankara regarding tourism. In this respect, Erdogan said that last year together 137,000 Slovaks visited his country, as reported by TASR.

On the occasion of the official visit of Erdogan to Slovakia, also the Slovak-Turkey Business Forum took place in Bratislava on March 31, whose aim was to contribute to the development of the business ties between the two countries.

There is huge potential for investments and business with Slovakia, Erdogan said.

“Slovakia is close to both the eastern and the western markets, it has skilled labour force, natural resources, stable environment, and attractive conditions,” the Turkish president added, as quoted by TASR. “Thus it became centre of the foreign investors’ interest, especially in automotive sector. Despite the global economic crisis and recession in Europe it managed to report an above-average economic growth in 2014.”