Pontis hands out Via Bona awards 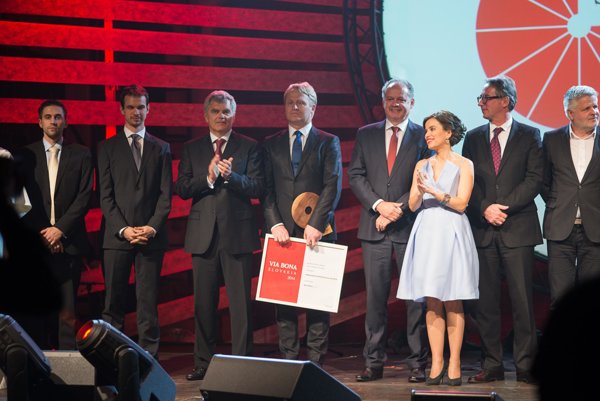 The awards, with a name that translate as “good path” from the original Latin, drew President Andrej Kiska along with other key representatives of the country’s business and social communities. In a short speech President Kiska recalled an old Indian proverb saying the unhappiest people are those who think about their own happiness and the happiest are those who think about the happiness of others.

“I’m very glad that in this room there are people who feel that to be responsible means also a moral duty to give back a part of their success,” said Kiska, who himself as a successful businessman launched the Good Angel philanthropic project.

In total 61 companies enrolled in the competition for the 2014 Via Bona awards in seven categories. Juries for individual awards selected winners from 23 companies which had advanced to the second round. A novelty this year was a new design for the award prepared by Mikuláš Zahatňanský, who created a wooden circle garnished with stars from silver wire. The circular shape of the award is meant to express human life and the stars represent people’s zest for things that are bigger than themselves.

The Main Award for a Responsible Large Corporation went to Accenture, a management consulting, technology services and outsourcing company. The firm works to develop people’s skills, helping them to find jobs via its Skills to Succeed programme. It also uses computer technologies to decrease its environmental footprint and is part of the Fund for Transparent Slovakia that supports watchdog organisations.

“All the companies in the final round showed high standards and thus differences were in nuances and not qualitative jumps,” said Zuzana Čaputová from the jury when commenting about the process of selecting the winner in this category. “In the end we considered that the criterion that would decide about the winner is about what message we want to send to the society by granting this award to this company. We consider as interesting and inspiring that the company chose a path, which is not the simplest, maybe to the detriment of their profits, but it sends by this a principal message from the company itself to zero tolerance of corruption.”

The Main Award for a Responsible Small or Medium-Sized Enterprise went to Banská Bystrica-based Alfa Bio that started its business in 1991 with the idea of helping to change dietary habits in Slovakia and it now sells its products in Slovakia, the Czech Republic, Hungary and Poland. The company,with tofu as one of its main products, has its own well, recycles its water and operates its own compressed natural gas (CNG) fueling station for its cars.

Lenka Surotchak, director of the Pontis Foundation, said that the perception of corporate philanthropy and corporate social responsibility has been changing in Slovakia with more and more companies going beyond their legal duties by caring for their employees, helping the community in which they operate, behaving responsibly toward the environment and dealing with socially difficult topics.

“I am thankful for each company that has enrolled in the competition because they understand that any company or business will be not successful if our country and our society are in decline,” said Surotchak in her speech.

Surotchak perceives this incarnation of the awards a breakthrough with record numbers of small and medium-sized companies taking part, including many Slovak companies with no ties to foreign ownership.

“Among winners are several projects of companies from economically weaker regions of Slovakia, like Banská Bystrica, Trebišov or Partizánske,” said Surotchak. “Also these prove that they can motivate people to a personal growth, interest in their environs and responsible attitude to environment.”

The Green Award went to bicycle courier Švihaj Šuhaj, which provides ecological green services in Bratislava and Košice. The jury awarded in this category also an honourable mention. It went to waste treatment company Marius Pedersen in Zvolen for volunteering activities focusing on the environmental education of youth in a playful way.

There are two winners of the Award for Excellent Employer category. While DeutschMann InternationaleSpedition in Prešov won the price in the sector of small and medium-sized companies for its education system Progress Board, it also won the Public’s Award. Accenture won this category in the sector of large companies.

The company Ten Senses, active in Bratislava and Nairobi in Kenya, received the Fair Player in the Market Award for helping local farmers in Kenya.

Pontis did not grand the award in the category the Supporter of Volunteering Award but the jury granted a honourable mention to the law firm BNT attorneys-at-law in Bratislava for their services provided pro bono to the Ulita civic association working with children from marginalised groups in Petržalka, the Bratislava suburb. Attorneys helped Ulita in a lawsuit with a construction company, which started building a children’s playground but did not complete it despite receiving full payment.

There were also two winners in the Good Community Partner Award category. The small-medium sized enterprise award went to GlaxoSmithKline Slovakia for its Second Step programme which within it trained teachers at elementary schools to use ethical education to prevent aggression. The award for a large company went to Embraco Slovakia in Spišská Nová Ves for its grant programme focused on environmental education at schools and kindergartens.

“These are projects and approaches by companies, which are exceptional in their aims, help neighbouring communities, employees, and take the environment into consideration or combat corruption while solve socially demanding problems in Slovakia,” Surotchak said.