ACTING Director of Žilina Faculty Hospital Pavol Drugaj met the request of dozens of nurses who filed notices and recalled Margita Porubčanská, the deputy for nursing on April 2. A day earlier he told 13 doctors who announced their departure at the hospital’s internal medicine ward that if they want to leave they are free to go. 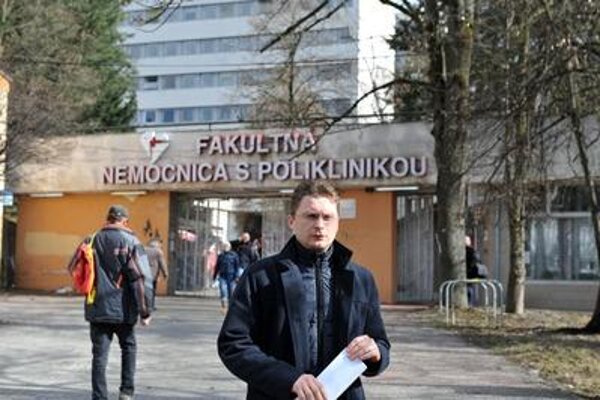 “I met the doctors and gave them an option that if they want to they are free to cancel their working contract today,” Drugaj told the press, as quoted by the Sme daily. “We have secured the operation of the department even without them.”

The hospital began making headlines after 15 of 19 doctors at the department of internal medicine handed in their notices, citing a lack of beds and poor hygienic conditions on March 3. Two later retracted their notices.

“There is a situation that patients have a waiting list for a shower and some of them take one at around 3:00,” said the head of the Medical Trade Union Association (LOZ), Peter Visolajský, to media, as quoted by the SITA newswire. “This department has 96 beds while there are at least 100 patients every day.”

Twenty-five nurses opted to leave the hospital on March 21, citing management’s incompetence and failure to address problems that have been accumulating at the hospital for a long time, said Slovak Nurses and Midwives Chamber (SKSaPA) head Iveta Lazorová. The nurses urged the facility’s management to cut their overtime hours and to increase the number of nurses in the intensive care unit – as well as in the hospital as a whole – so that the wards can function properly.

Subsequently Čislák inquired into the situation at the hospital in Žilina, ministry spokeswoman Zuzana Čižmáriková told the TASR newswire on the same day.

“He called on the director to assume personal responsibility for the situation that has arisen,” Čižmáriková said, as quoted by TASR. “The director has complied with this call and resigned.”

Despite Volák’s departure, on March 23 another 39 nurses filed their notices with the Žilina hospital, SITA wrote, including those from emergency and post-surgery wards. The head of the Union of Nurses and Midwives (OZSaPA), Monika Kavecká, specified that the reason for the latest notices is the unsure development of the situation in the Žilina hospital, as well as a statement from 20 nurses heading wards, who on March 20 supported Porubčanská who allegedly had kept lying – also to the public – about the real situation in the medical facility.

Drugaj met with nurses on March 31 but the only result of the discussion was that they agreed on the date for another meeting set on April 16. Later he recalled Porubčanská due to bad management, according to private broadcaster TA3.

“I am aware of the decision and I respect it,” Porubčanská told TA3. “I did my job as good as I was able to do.”

When speaking about doctors, Drugaj told the press that there are two groups of employees in the internal medicine ward. The majority that supports acting head of the department Renáta Oláhová, and the minority, including 13 leaving doctors which want her recall, the SITA newswire reported.

Both nurses and doctors who decided to leave have new requests and some of them are not far from threatening, Health Minister Viliam Čislák told the press on March 31.