BRUISED and wounded legs and backs were on full display for television cameras the day before Easter as a group of Roma from the eastern-Slovak village of Vrbnica complained of an inappropriate police raid.

The police intervention in the settlement near Michalovce allegedly left 15 people injured. The men claimed that the police brutally beat and kicked them.  The police deny the allegations and there is no video recording of the incident.

“Citizens who were working in the community services at that time were attacked as well,” Tokár told Korzár.

The Michalovce hospital confirmed that a group of 15 people was admitted in the hospital with light injuries that required outpatient treatment, Korzár reported.

The police raid in Vrbnica was part of a large police action which took place on the morning of April 3 and during which the police were looking for people who failed to show up to start their prison sentences. The police raided 46 locations and found seven people they were looking for, but none of them in Vrbnica, the public-service RTVS radio reported.

No violence in Vrbnica, police say

The Košice regional police head Juraj Leško convened a press conference on April 3 in response to the media reports about the alleged violence against the Roma. The raid in Vrbnica took half an hour and 15 police officers were deployed there, including officers from the emergency motorised unit, and doghandlers, but no swat units, he said.

“No persons were injured,” Leško told the press conference as quoted by Korzár.

“We object to the words that it was a brutal police raid, it is nonsense that someone wants to use against the police,” Leško said, adding that he was convinced the police were doing their job “well and right”.

Peter Pollák, the government’s proxy for Roma communities requested that the General Prosecutor’s Office and the Interior Ministry look into the allegations. He visited the village on April 4 to hear the account of the raid from the locals.

“I’m curious how the inspection will treat the medical reports and findings of the affected Roma, where the character of the injuries is stated,” Pollák said.

Pollák also stressed that the police should be using video cameras during similar raids. Only two of the 46 raids were recorded on a video camera, RTVS reported.

“We do not have enough recording equipment to be able to record every such raid,” Leško told the press conference. The police haven’t used a camera in Vrbnica because they do not consider the place to be “problematic”, according to Leško.

“If we only slightly expected any problems, a camera would be there for sure,” he said.

The police are currently not obliged to use cameras to record raids like the one in Vrbnica, but Interior Minister Robert Kaliňák had pledged earlier that they would do so.

“It would also protect the police who are oftentimes unnecessarily accused, nevertheless it is suspicious that some raids led by the police are surveilled by cameras and others aren’t,” Pollák said as reported by RTVS.

Tokár wants to install surveillance cameras in the village after the police raid, the RTVS reported.

Some 200 people gathered to protest against the police’s conduct in front of the municipal office of Vrbnica on April 4, the SITA newswire reported. A larger protest is planned for April 9 in front of the district police department in Michalovce.

Similar clashes between Roma and police have been reported in the past. On June 19, 2013, more than 60 police officers raided the Roma settlement informally named Budulovská outside Moldava nad Bodvou. Police were purportedly seeking seven men. They found none of those men, but according to eyewitnesses, violence ensued and 15 other Roma were taken to the police station.

While police allege they were attacked upon entering the 800-person settlement, none of the 15 detained were ever charged with a crime resulting from the clash. Several of the Roma were injured, and at least one of them contends that he underwent two more severe beatings at the police station itself. 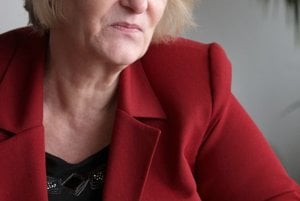 ETP Slovensko, a non-profit group that works with ethnic minorities, documented the injuries with photographs. The raid was preceded by a conflict involving some settlement residents with a police patrol after a party on the night of June 16, according to ETP Slovensko.

The Interior Ministry’s inspection found no violations of the law and now says that it believes it will expose who has been “misleading about the case from the very beginning”.

In January 2014, six months after the infamous police raid and criticism by Ombudswoman Jana Dubovcová, the prosecution for abuse of powers of a public official, unauthorised entering of a private home, torture and inhumane treatment were launched. So far, nobody has been charged, but instead, Roma who identified one extremely brutal police officer, are to be examined for mental health and moral capability, intellect, character, ability to perceive and remember experiences, and reproduce them.

The lawyer of the Roma involved complained about this step, but the Regional Prosecutor’s Office in Prešov responded that the process is fine, the Denník N daily wrote on February 16, adding that such an examination was also ordered for some police officers. It is not known whether policemen face the same questions and tests.