THE PROSECUTOR Office received a petition on March 7 that contains over 6,500 signatures urging head of state Andrej Kiska to refer a recently-passed Waste Act back to Parliament, the TASR newswire learnt from representatives of a civic initiative called ‘I Want a Clean Slovakia’ on the same day. 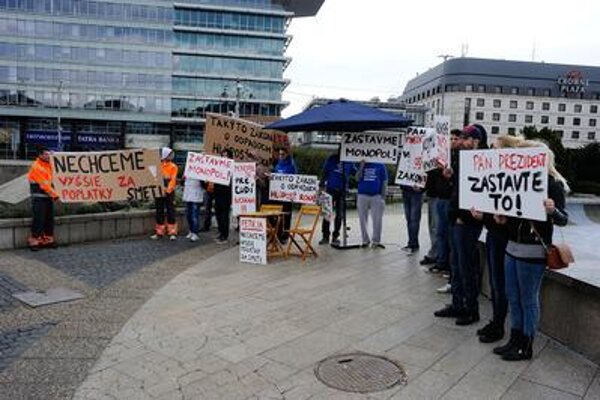 Protesters standing in front of the Presidential Palace.
Font size:A-|A+0

Member of the petition committee Vladimir Sinak said that the petition organisers are seeking to ensure that the Environment Ministry-drafted omnibus legislation is redone completely. According to Sinak, the piece of legislation is riddled with shortcomings, and he singled out the proposed regime as being ‘extremely costly’ as the bill is its single worst flaw.

The initiative members are of the opinion that the law will eventually trigger higher costs for the public with regard to waste, as well as more illegal dumping and job losses. According to the activists, the only entity to benefit is the packaging waste collection, recovery and recycling company Envipak, for which the legislation was tailor-made.

The activists are aiming to continue to collect signatures from the public until Kiska vetoes the bill. Should Kiska sign the bill into law, the I want a Clean Slovakia initiative will turn to the European Commission.

“It transpires from the names of the organisers that this is not a genuine initiative of citizens, but one of representatives of some waste-management companies that are apparently happy with the current system that is transparent but doesn’t work,” said Environment Ministry spokesman Maroš Stano, as quoted by TASR.

He went on to call the claims of the detractors ‘misleading’ and said that they’ve been refuted several times already.

Among other measures, the bill abolishes the Recycling Fund and payments of recycling fees by producers and suppliers. It will also be up to producers to take care of the 'sorted' waste, a move the Environment Ministry claims should alleviate the burden of towns and villages, which are currently obliged to deal with municipal waste. People – via municipalities – should pay only for 'unsorted' waste.

President Kiska has already seen Parliament override his veto four times in his less than ten months in office.