An inside look at the early days of Slovakia’s English-language newspaper. 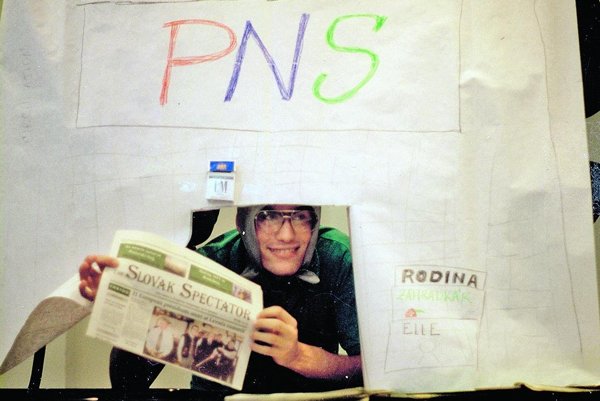 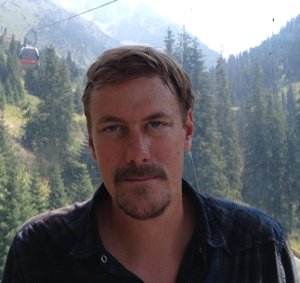 I ARRIVED in Slovakia the morning of July 4, 1994. By evening I had shook hands with Slovak Republic President Michal Kováč, ate caviar and crackers with Vladimir Mečiar and exchanged small talk with U.S. Ambassador Theodore Russell.

A non-profit organization, the Foundation for a Civil Society, had opened an office in Bratislava and was looking for people with knowledge of Slovakia. I had spent time in Slovakia as an English teacher in 1993, a witness to the creation of a new country, new currency, and the emergence of Slovak as an identity in Europe.

Not many Americans could point out Slovakia on a map or had even heard of it. Prague yes. Slovakia? Slovenia, Yugoslavia, Soviet Russia, whatever.

Founded by Wendy Luers, a human rights activist and wife of former U.S. Ambassador to Czechoslovakia (1983-1986) William Luers, the NGO based in Prague was looking to expand its operations in Slovakia and my past experience in the country was valued. At least I knew a few Slovak words and where the country was.

I went straight to The Foundation’s office in Old Town Bratislava and met Carrie Slease, the director. After helping set up a place for me to sleep, she said I should check out the U.S. Embassy Independence Day party at the Hotel Bôrik. I took a tram up windy streets past the dirty brown Bratislava Castle, under the soaring WW II monument Slavín, to a white concrete hotel with a view towards the West, the Danube River and Austria beyond.

I arrived at the same time as Mečiar and we walked in together. Mečiar had an American and Slovak flag sticking out of his suit jacket pocket. We both went straight to an elaborate table of food and tried the Caspian Sea caviar. When Kováč came a few minutes later and shook everyone’s hand, I watched Mečiar quietly exit. At the time I had no idea I had just met the President and the future Prime Minister. I also couldn’t have known that their political feud would shape the fate of The Slovak Spectator.

That the newspaper is celebrating 20 years of publishing where others have stopped – The Prague Post, Warsaw Voice, Budapest Sun – is due to the DNA that was infused into the newspaper’s soul – tenacity.

I suppose The Slovak Spectator existed after its first 100 days because of the 100 days that preceded its launch. Founders Richard Lewis, Rick Zednik and I would never have believed we could publish an English-language newspaper had it not been for our experience putting together one issue of The Slovak Mirror in October 1994. 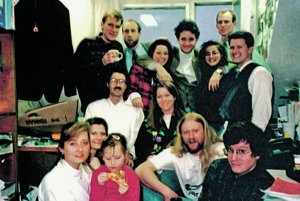 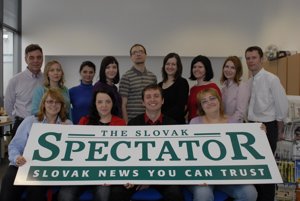 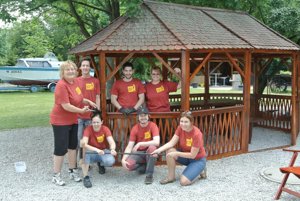 Richard, Rick, and I met for the first time in August 1994 at the Foundation’s headquarters on Kapitulská Street, a crumbling cobblestone street under the castle but cut off by a motorway that acted like a moat between the old town and those in power, and down the street from St Michael’s cathedral, where brown hooded monks would walk below our office window before vespers. I was helping Carrie prepare a grant proposal for USAID to help provide schools across Slovakia with access to English-language teachers and books.

Richard had been in Slovakia already a year as an English teacher in the small town of Spišské Vlachy near the sprawling Spiš castle, the largest castle ruin in Central Europe, with dreams of becoming a foreign correspondent. Richard and Carrie had gone to Duke University together and he was in the office that night borrowing the computer to write a story on the Spiš region’s Roma population that he hoped to sell to an American publication.

Rick swung by Kapitulská that evening to gain contacts for his new role in Bratislava to be the stringer for The Prague Post, a weekly newspaper founded in Prague in 1991 with Editor-in-Chief Alan Levy, the legendary International Herald Tribune reporter who had witnessed the Russian invasion of Czechoslovakia in 1968, and whose book “A Rowboat to Prague,” inspired thousands of young Americans to flock to that city in the 1990s.

We had an easy chemistry together and we enjoyed the quick friendships with other American and British expatriates – English teachers, diplomats, consultants in one of the then Big 6 accounting firms, bankers, investors, adventurous foreigners and other travellers – who bewilderingly found themselves in Europe’s youngest democracy. Slovakia became its own state on January 1, 1993.

The three of us also shared dreams of becoming journalists.

Rick had the most bylines and the education credentials, having graduated from Columbia’s Graduate School of Journalism. Richard had a ravenous appetite for writing and a few years in Washington DC working as a press secretary for a congressman and the Saudi embassy. My experience lay at my college newspaper The Oswegonian as the sports editor and news reporter, a few college writing awards and an internship at a Rochester, New York TV station.

We were hired by Slovak entrepreneur Dušan Polakovič to continue publishing his project, an English-language monthly called The Slovak Mirror. We worked in a tiny office on Hviezdoslovo Square, down the street from the Slovak National Theatre and the American Embassy. As badly as I had wanted to write and be a reporter, I drew the short straw and became the “Business Manager”, in charge of helping Dušan find advertising, build subscriptions and transfer the newspaper’s electronic files to the printer.

Rick and Richard became co-editors and encouraged me to write a few stories if I had time. Even though I wasn’t an editor in name, I spent countless hours with Rick and Richard helping figure out story ideas and laying out the paper with Rick using Quark Express. This was going to be the fourth edition of The Slovak Mirror after Dušan had published three issues earlier that spring until his editor quit and he hired us. We had the pivotal Slovak election of 1994 to report on as well as the introduction of Slovakia’s first fast food joint, not McDonald’s, but Chicken Treat, which didn’t last long.

I wrote about Slovak-American Eugene Cernan, the last man to walk on the moon, who gave a guest lecture at Comenius University, as well as the Slovak national hockey team’s quest to climb out of Group C and join the Czech Republic in Group A. The Slovaks were incensed by the International Ice Hockey Federation’s decision to dump the Slovak team into the lowest group with the likes of Japan, Great Britain and France after the split up of Czechoslovakia while the Czechs were placed with the traditional hockey powers of Canada, the USA, Sweden, Finland and Russia.

As Business Manager, I also saw first hand the revenues that could be made through advertising: 90,000 crowns or about $3,000 for a full-page ad! Considering Dušan offered the three of us $300 per month and had four pages of ads in our October issue, it wasn’t hard to do the math and see how publishing could be good business.

We put in ridiculously long hours writing, editing and laying the paper out. At the end of these long nights we would stumble into an underground pub and meet our friends for a brew or two, then do it again the next day and night. We were also busy promoting our efforts to the expat community and there was much excitement being generated with the help of the American Chamber of Commerce and its members, as well as the diplomatic community.

October 6 we said the paper would be available. Except it wasn’t. Delays with printing we were told by Dušan. It would be published on October 10. Except it wasn’t. Dušan had the contacts with the advertisers, the printer and the distributors so we were dependent on his word.

Then Dušan did not pay us when he said he would and we lost contact with him. No paper, no pay, no idea what was going on. As the days grew shorter in October, our pride, our credibility, our belief in The Slovak Mirror, became damaged beyond repair. It was humbling.

But we had felt the adrenaline of publishing. We had produced a newspaper together even though it didn’t exist on actual paper yet. An idea started to germinate in each of us: Did we need Dušan to do this? Could we do this on our own?

Beverly Douglas was the founder and president of the American Chamber of Commerce (AmCham) in Slovakia and a huge supporter of our efforts to publish the newspaper. It’s easy to see why from her business point of view that an English-language newspaper would signal to potential foreign investors that a vibrant foreign community existed. And the newspaper would provide critical reporting on business and politics in a language they could read. She was also our friend – funny, foul-mouthed, generous, passionate.

At a dinner she hosted at her apartment in a 11-storey tower in Dúbravka, a Bratislava suburb, Rick, Richard and I plus other expat friends debated the viability of going off on our own. As the evening drew to an end way past midnight, we were toasting Slivovica to our assured success. We just needed a business plan. We had the belief!

Daniel J. Stoll is one of the co-founders of The Slovak Spectator. He lives in Jersey City, NJ with his wife Reni and son Mark (age 13). He works for Rutgers, The State University of New Jersey as director of communications at Rutgers Business School. Along with founder Eric Koomen, Daniel still maintains ownership in The Slovak Spectator along with Petit Press, the majority shareholder.