MOST of people, who attended commemoration of 6,845 men and women buried at the Slavín War Memorial on April 4, the day when Bratislava was liberated, came with civic association Chart 2015, which is close to the communist party. 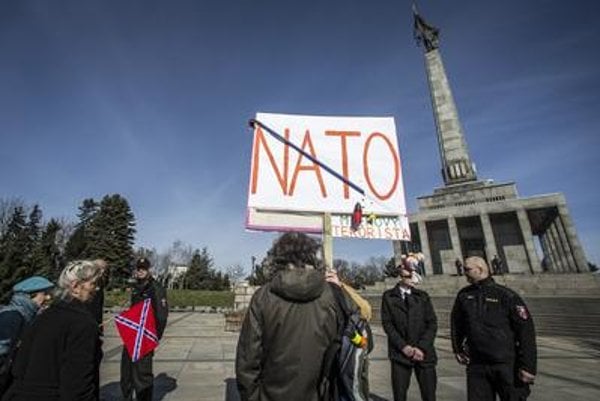 It also drew the attention of hundreds of people, of whom some were waving with Slovak and Russian flags and held anti-NATO banners. They welcomed speeches Fico and Lavrov with applause. Contrary, they booed Kiska who has been critical of Russian policy in Ukraine.

The secretary of Chart 2015, Peter Nišponský, now serves as member of Communist Party of Slovakia (KSS) Central Committee and from 1973 to 1989 he worked for ŠtB, the communist-era secret police, according to Denník N daily.

“Yes, of course, It has been well-known about me for 25 years,” Nišponský told the daily. “It is true. My conscience is clear, toť vsjo [Russian for that is all].”

He told the daily that he did various jobs in ŠtB from regular soldier to head of analytics department. “It was for the protection of Czechoslovak Republic economy,” Nišponský told Denník N.

However, he started in department focused on monitoring people, according to the daily.

When artists painted a statue of communist-era leader Vasil Biľak which red in Krajná Bystrá (Prešov Region) in late February, Nišponský published on KSS website that it is “politically motivated criminal act of defamation of nation, race and beliefs” as well as display of modern fascism.

In fact, there are more than 500 hundred members of Chart 2015 with former KSS officials Karol Fajnor and Jalal Suleiman in its top positions.

Marián Farkaš, who describes himself as the ambassador to the Donetsk and Luhansk republics, also attended the commemoration event. In the past he visited former member of Slovak Levies paramilitary organisation Martin Keprta, who recently joined separatist army in Ukraine, in the hospital. Keprta end up hospitalised after being hit by shrapnel to the face in the beginning of 2015, Denník N reported.

No Ukraine in speeches

Neither Fico nor Lavrov mentioned Ukraine conflict in their speeches during the ceremony at Slavín.

“This is to express thanks to those who sacrificed their lives to save the lives of our parents, of us and our children,” he continued, adding that to lay down one’s life for others remains an act of courage in any historical period.

Also speaking at the event, Lavrov extended his gratitude to the Slovak cabinet for preserving the commemoration in remembrance of the fallen soldiers and for maintaining their tombs at Slavín. Lavrov added that Russia and Slovakia share views on warfare and that the world must do its utmost to prevent another episode of bloodshed of the scale of World War II.

“We aim to prevent such things from happening ever again and at making sure that the UN retains its central role in overseeing security in the world,” said Lavrov, as quoted by TASR. “We set our sights on ensuring that no one tries to dominate in the world, subordinating others against their own will.”

Kiska commemorated men and women buried at Slavín before the official ceremony attended by Lavrov and Fico. Before Kiska went to Slavín he had a meeting with Lavrov.

Speaking after a meeting, Kiska emphasised that people in Slovakia understand the essential role played by the Red Army in the liberation of the country and that Slovakia isn’t interested in twisting facts pertaining to its history.

“And this will remain as it is. There is no interest whatsoever in Slovakia, no predisposition or tendencies towards twisting historical facts,” he said, as quoted by TASR partly referring to his recent decision to decline an invitation from Russian President Vladimir Putin to attend the official celebrations of the 70th anniversary of the end of WWII in Moscow.

Kiska revealed that his talks with Lavrov also broached the topic of recent developments in Ukraine. He told the Russian politician that Slovakia doesn’t view the situation in Ukraine as only a distant geopolitical theory and criticised the current Russian policy for annexing Crimea.

“It’s also a breach of an extraordinary obligation of the Russian Federation made in Budapest in December 1994,” Kiska said, as quoted by TASR, “in which Ukraine pledged to give up its nuclear weapons, and the United States, United Kingdom and the Russian Federation, for their part, pledged to respect the sovereignty of Ukraine within its valid borders.”