Works on the Bratislava Old Bridge catching up with schedule

AFTER the works on the re-construction (or rather new construction) of the disassembled Old Bridge in downtown Bratislava were delayed by several weeks if not months, they are now catching up with the schedule and the original deadline may be kept. 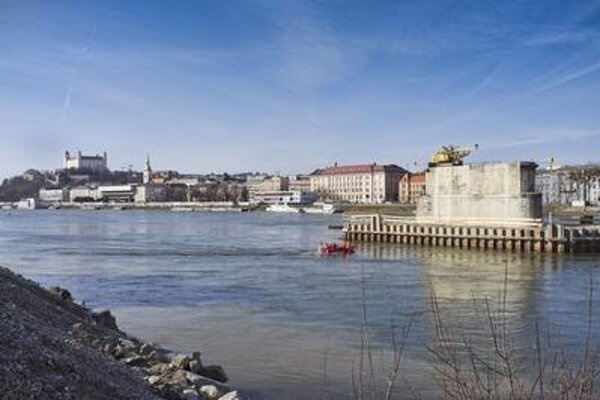 If the bridge is not finished by December 15, 2015, the Slovak capital will not get money from European Union funds – 85 percent of the total sum – which would be a disaster for the city coffers, the SITA newswire wrote.

The project was behind schedule by 10 weeks as of February this year, due to a search for mines, uncooperative weather and accidents, according to the Transport, Construction and Regional Development Ministry.

The construction, launched in December 2013, has been lagging behind not only due to mines found – and more suspected – on the bed of the Danube River, but also due to the fact that during the Christmas 2014 period, workers had three weeks off which the current mayor Ivo Nesrovnal called irresponsible due to time pressure. Nesrovnal also added that there is be a construction supervisor constantly present from March, to ensure that the works are completed on time.

From March, the bridge is also being completed from two points – not just from the Old Town bank, but also from Petržalka. The parts for the construction are gradually tailor-made in the ironworks in Vítkovice, the Czech Republic, to then be assembled in Bratislava. 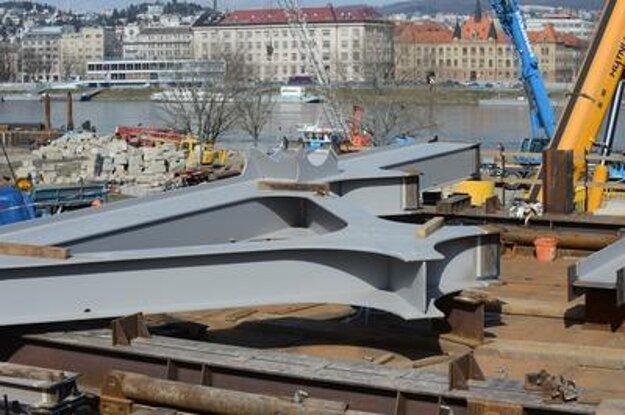 To make up for the time lost, works will be done also during Easter; not all workers will be on the site, but the necessary works will be still done. “It is impossible to finish the bridge by the end of August,” head of the construction team Peter Tekeľ of the Eurovia company said on March 24, commenting on the original deadline which was silently supposed to be postponed – but never officially was. “We will do everything to manage to finish by December 2015.” Tekeľ said. More than one third of the bridge has been already completed.

Currently, the pillar No 34 is being built which shall replace the two original pillars; as the European Commission requires an enhancement of the navigation template.

People living in the vicinity complain about night works and the extensive noise. “We try to minimise it as much as possible,” Tekeľ told the TASR newswire. “But the works are just the way they are; the technology cannot be changed, and the deadline is tough, so we have to work also overnight.” He asked people to still be patient in the first week of April. Until then, the works on the artificial island which create big jolts and releases steam once an hour shall be finished.

The construction assembly is delivered to Bratislava two days in advance from Vítkovice, while each day 30 more metres shall be extended.

Apart from the bridge itself, the Eurovia SK company will carry out the construction works for €58.8 million without VAT – which was the lowest bid, according to TASR – of which the EU will finance 85 percent, the Slovak government 10 percent and the city 5 percent.

The construction of the “new Old Bridge” is part of a wider change, the so-called supportive city transport system on Štúrova Street, SITA wrote.

The first phase of building the supportive city transport involves the reconstruction of the defunct Old Bridge and the extension of the tram line from Šafárikovo Square downtown to Bosákova Street on the other bank of the Danube River, in the Petržalka borough. The plans call for removing the traditional bus and tram stops on Šafárikovo Square and moving them to Bosákova – where the trams will make a u-turn back to downtown. The plans also include the construction of a new overpass near the Artmedia football stadium and the enlargement of the Einsteinova overpass, both in Petržalka.

The most acute impetus for the demolition of the Old Bridge and the construction of a new one was its poor statics and technical state, however.