NEWSPAPERS are forming their authors just as profoundly as journalists are shaping the media they work for. 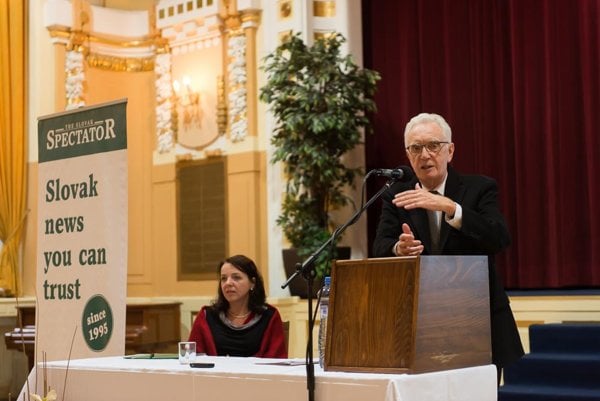 This relationship far transcends limits of working contracts, number of published stories and the years spent in a newsroom.

Since the quality of journalism so much intertwines with human character, the newspapers are just as honest, straightforward or fair as the people who are making the paper. If the pursuit to get people’s attention fails to develop into something much larger than stories of the individuals involved, the paper usually sinks into oblivion.

The past two decades suggest that The Slovak Spectator was founded at the right time for the right reasons: to search for the closest thing possible to the truth during the years of Slovakia coming of age as a democratic country. The journey of the newspaper founded by four Americans – Eric Koomen, Richard Lewis, Dan Stoll and Rick Zednik – in 1995, has far outgrown the original ambitions to help English-speaking expats survive in Slovakia.

In the retrospective of 20 years, the newspaper has helped groom journalists and media professionals who later went on to make their mark outside this publishing house or even the country. The Slovak Spectator has made a contribution that surpasses the regular routine of putting out a paper and feeding a website. It has formed journalists who learned how to tell stories in a fashion built on the best journalistic traditions.

Confronted with aches of the theory-driven journalism education in Slovakia, The Slovak Spectator took on board journalism students, trained them and sent them to the field to experience journalism on their own skin. After finding a sympathetic ear at Comenius University’s department of journalism, the newspaper even ran its own journalism class and opened it up for students from other journalism schools as well.

“Graduates” of the Spectator class then took jobs with the best media outlets in Slovakia. Today, some are working for the broadsheet Sme daily, the public radio and even for the Spectator itself. For a paper with a limited staff and resources, this is quite an achievement. Yet, efforts of the Spectator to contribute to the media discourse in Slovakia are far from ending there.

If not for The Slovak Spectator, a number of prestigious Pulitzer winning journalists and the administrator of this respected prize may not have found their way to Slovakia very easily, if making it to this small central European country at all. 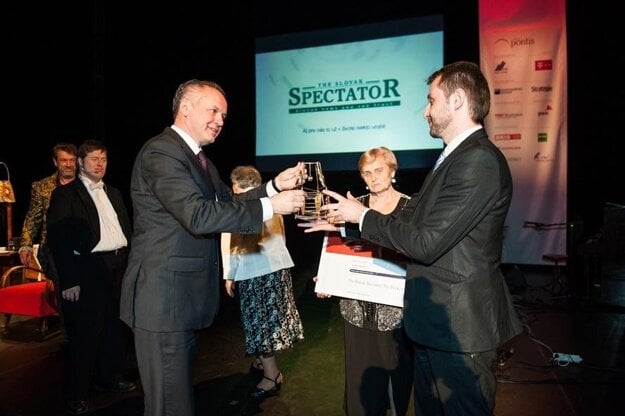 The Slovak Spectator received one of the main Via Bona awards in 2014. (Source: Courtesy of the Pontis Foundation.)

With the help of the partners of the Best Media Traditions programme, the newspaper brought in accomplished journalists who actually have authentically lived what many schools only preach. They not only wrote that big story that brought them acclaim in America but also have helped to keep the faith in the good old journalistic principles alive and explained why the fundamentals of journalism, including the ability of talking to people, should not change along with technology.

Joshua Friedman, Tim Weiner, Abigail Goldman and Walt Bogdanich shared much more than just phrases about how important the media’s watchdog role is. Their narratives clearly delivered the message that along with being fair, truthful and accurate it is equally important to remain deeply human even in times when such humanity is lacking.

Students of the one of the most prestigious journalism schools of the world, the Columbia University’s school of journalism, felt lucky if they made it to classes of Sig Gissler, the now retired administrator of the Pulitzer Prices. Yet, the Slovak Spectator made it possible for students in Slovakia to experience the Columbia atmosphere for at least a couple hours without having to pay any hefty tuition fee.

Sig Gissler not only spoke to them but even commented on their work and advised them how to get the story right in all of its important details. Tell the story clearly and use the human angle whenever possible to make the piece come alive for the reader, Gissler told the young journalists.

He sent them to the streets and asked them to talk to strangers “because it helps you spread the journalism net wide. You discover story ideas, you encounter potential sources and you stay in tune with your community. I do fear that too many journalists walk around with their eyes on their smart phones, thus missing the world as it passes by.”

And most of them did talk to strangers and brought back stories that they will remember much longer than notes copied from an outdated textbook onto the whiteboard.

At the time I joined The Slovak Spectator as its editor-in-chief in 2003, the size of the editorial room was three times the number of reporters I left behind in January 2015 when I moved on to lead the Sme daily. It did not happen because the publisher Ján Pallo and I felt we could do the paper with very few people. It was our response to the question: Do we want The Slovak Spectator to continue despite all the limitations imposed on us by the development of the print market or do we give up and say it is no longer possible? Over the past six years we kept saying yes to the life of the paper, and with the support of Petit Press CEO Alexej Fulmek, we somehow managed year after year to keep it vibrant without compromising the content.

After the departure of Tom Nicholson in 2007, we were no longer able to do large-scale investigative stories but we remained committed to those grand old principles of journalism. Neither Fulmek, nor Pallo have ever questioned that we need to do it right and keep to the rules even if some other media outlets were crossing the red line in order to lure advertisers to survive. The year of 2014 was especially trying and it did reopen the difficult question: are we able to carry the paper and the tradition further without reducing it to the point where readers will no longer find those crucial pieces to create their own understanding of Slovakia. The answer was again a resounding yes and I do genuinely wish and believe that it will remain so for many more years.

Beata Balogová is the editor-in-chief of the Sme daily.