PRIME Minister Robert Fico surprisingly delivered on April 13 an almost one-hour long evaluation of achievements his government reached during the first three years at the helm. He listed as the biggest successes of his one-party cabinet the consolidation of public finances, one of the lowest levels of the general government debt out of the eurozone countries, support of economic growth and reduction of unemployment. 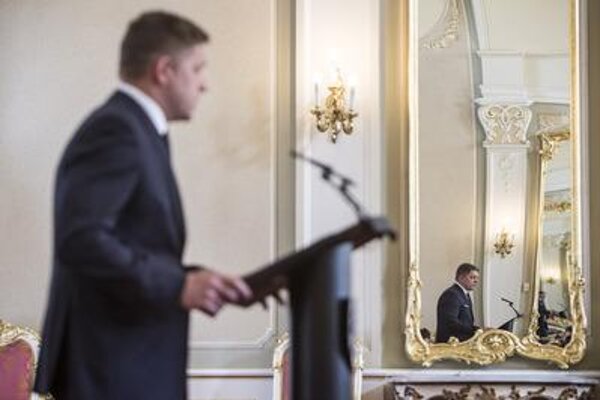 “We are a social-democratic government,” said Fico as cited by the SITA newswire. “We perceive development of the social state and market economy as equal steps.”

He promised that during the last year of his term, his cabinet would pursue politics, which on one side respects consolidation of public finances and on the other hand creates conditions for improvement of standards of living of citizens.

When assessing the three years since his cabinet came to power, PM Fico announced that his Smer party will approve its second social package on May 23 and will immediately begin carrying out the measures – without jeopardising public finances.

Fico further voiced his concerns that several statements made by opposition leaders indicate that if a rightist coalition emerged from the 2016 general election, there would be nothing left from the two social packages.

“Under a pretext of some kind of unsystematic approach, such a rightist government will, without a doubt, cancel a major part of these measures, as it can’t identify with the measures in terms of values,” said Fico as cited by the TASR newswire. He claims that such a scenario would put a halt to increases in the minimum wage, boost the position of employers in the Labour Code to the detriment of employees, lead to increases in energy prices and scrap free-of-charge transportation for pensioners and students.

Political scientist Grigorij Mesežnikov thinks that the Fico government would not launch any systematic changes related to combating corruption or health care, which are showing to be the most problematic sectors during the rest of his term. He considers the evaluation of three years in power as the start of the election campaign prior to the parliamentary election scheduled for 2016.

“It is expected propaganda; but he did the same before every election: that he scared with the loss of social certainties,” said Mesežnikov as cited by the Sme daily.

Mesežnikov was sceptical about presented achievements.

“Consolidation of public finances is a constitutional duty,” said Mesežnikov, adding that if the government had failed to do it, sanctions would have arrived.