AS PART of efforts to draw people to the April 23-30 Fjúžn festival a group of foreigners recited the Slovak poem ‘Mor Ho!’ (Crush Him!) in a video invitation. 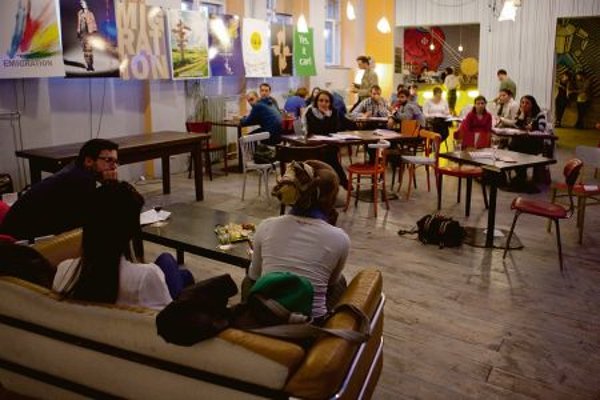 One of the discussions with foreigners held during previous editions of [fjúžn]. (Source: Radovan Dranga)
Font size:A-|A+0

The poem comes from the revolutionary times of the 19th century and is authored by Samo Chalupka.

The festival, which opens the issues of migration and integration, celebrates its 10th anniversary. This jubilee year has the “Puzzle” as its leitmotif.

“The topic Puzzle symbolises the metaphor that every society is composed of all its parts and every one of these is equally important,” Laco Oravec, programme director of the Milan Šimečka Foundation which organises Fjúžn, said in a press release. “And migrants are one of such parts of Slovakia.”

This was also the reason why they chose 10 migrants from various countries and with various occupations who came to live in Slovakia for different reasons. The organisers of the festival also plan to offer the visitors their portraits in form of photo exhibition and video interviews.

The festival, whose name is a literal Slovak phonetic transcription of the word fusion runs from April 23 to April 30. It comprises a host of different events, from exhibitions, to concerts (and a party organised by expats and focused on expats), workshops (including one for children), markets offering exotic goods and meals, merry get-togethers, debates and presentations, the organising team has informed.

The programme can be found at www.fjuzn.sk.