IN AN April 13 speech, Prime Minister Robert Fico evaluated the achievements of his government during three years in office in a display analysts consider as the launch of campaigning for next year’s general election. 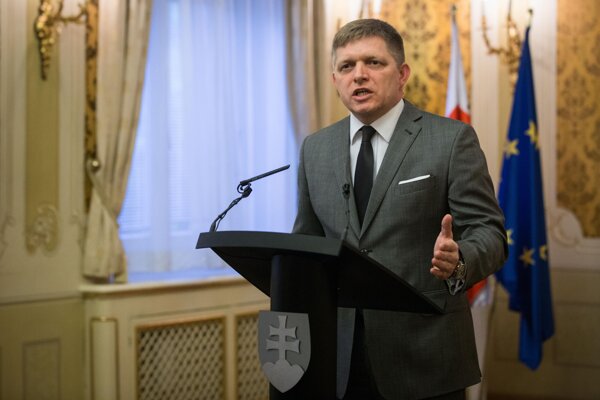 “It was a party action with the aim to divert attention from not very pleasant events, like problems with Váhostav construction company or the situation in the health sector,” Grigorij Mesežnikov, head of the Institute for Public Affairs (IVO) think tank, told The Slovak Spectator.

Fico listed as the biggest successes of his one-party cabinet the consolidation of public finances, one of the lowest levels of general government debt among eurozone countries, support for economic growth and reduction of unemployment.

Mesežnikov added that Fico used the opportunity to promote “some messages to the public via promoting the achievements”.

Since the speech lacked any controversial topics or failures of the cabinet, Mesežnikov considers it as some kind of “communication event” which can also be considered as “the unofficial launch of the pre-election campaign”.

“We are a social democratic government,” Fico told journalists on April 13, as quoted by the SITA newswire. “We perceive development of the social state and market economy as equal steps.”

He promised that during the last year of his term, his cabinet would pursue politics that respects consolidation of public finances but creates conditions for improving living standards.

When assessing the three years since his cabinet came to power, Fico said that the government has fulfilled the basic tasks of its programme statement, including the consolidation of public finances, supporting economic growth and boosting employment. He also announced that his Smer party will approve its second social package on May 23 and will immediately begin carrying out the measures – without jeopardising public finances.

Fico further voiced his concerns that several statements made by opposition leaders indicate that if a right-wing coalition emerged from the 2016 general election, there would be nothing left from the two social packages.

“Under a pretext of some kind of unsystematic approach, such a rightist government will, without a doubt, cancel a major part of these measures, as it can’t identify with the measures in terms of values,” said Fico, as cited by the TASR newswire.

He claims that such a scenario would put a halt to increases in the minimum wage, boost the position of employers in the Labour Code to the detriment of employees, lead to increases in energy prices and scrap free-of-charge transportation for pensioners and students.

As for the adopted measures, he praised the agreement with the opposition parties on passing the constitutional amendments on protecting the marriage and water, and also changes to the judiciary. Another important change was the adoption of a dual education law.

Political analysts, however, did not offer such positive evaluation of the Fico government. Though it had an advantage of having no coalition partner, which allowed it to pass the measures easily, it did not use the potential this brought, Mesežnikov said.

He pointed to the lack of measures affecting the public and state administration, decrease in taxes and payroll taxes, reforms in education or missing support for start-ups. This government passed the measures which it liked, without discussing them with someone else and searching for compromises, political analyst Miroslav Kusý added.

Though the government contributed to improving the current economic situation in the country, via better collection of taxes, the favourable economic situation is mostly the result of external factors, including the restoration of European economies, including Germany, and effects of measures passed by the previous cabinets, Mesežnikov said.

Both Mesežnikov and Kusý cited cronyism as the main factor impacting the past three years.

“This government is quite successful regarding using its position to implement measures strengthening the positions of Smer and its surrounding,” Mesežnikov explained, adding that this concerns part of the business environment that benefits from its links to Smer.

The analysts mentioned various scandals, including the current problems with construction company Váhostav, the overpriced purchase of computed tomography device by the Piešťany hospital or the EU Star case when one company with visible links to the ruling party won 100 percent of the orders in which it competed.

“These scandals have mostly been played to out,” Kusý said. He mentioned the CT purchase case which on the one hand resulted in several Smer prominent nominees leaving their posts, but on the other it did not lead to any solution, like the criminal prosecution or end of investigation.

No reforms till elections

In the following 11 months the government will focus on implementing measures meant to strengthen the rule of law in Slovakia, especially changes in judiciary and fighting corruption. Combating corruption is among the top priorities together with improving the health care and strengthening the state’s position in strategic companies, like Slovenské Elektrárne (SE), Fico told the press.

In this respect he stressed that his government disagrees with selling the 66-percent share in SE by Italian company Enel as the construction of the third and fourth nuclear blocks of the Mochovce nuclear power plant is underway. The possible sale would certainly endanger the completion, he added.

“The economy minister in cooperation with the finance minister will soon submit to the cabinet the proposal whether and under which conditions Slovakia will try to buy back the privatised 66-percent stock or other share with the aim to get this strategic company under state control,” Fico said, as quoted by TASR. He added that they will also submit the report on SE privatisation at parliament’s next session.

Neither Mesežnikov nor Kusý however expect that the government will pass any reform measures until the elections.

“Smer is not a reform party,” Mesežnikov said.

Though it may pass some laws to solve the acute problems, like in the case of Váhostav, the party will not adopt measures which would “reduce their credit with voters”, Kusý added.

“They will continue in what Fico described as the politics of a strong social state,” Mesežnikov said.

As for the main motive of the upcoming campaign, Smer will probably use “the social generosity served as the main achievement of their ruling”, Mesežnikov said. He however questioned the selection of the groups which really need social help. Sociologists say that they should rather target those who are really in danger and may fall below the poverty line.

“There is a question whether Smer really solves these problems systematically or it targets only the part of the population which is able to return it in form of increased voter support,” he added.

Another way of leading the campaign was indicated by the way Fico confronted Ján Figeľ, the Christian Democratic Movement (KDH) leader and former transport minister, for the Váhostav case, essentially transferring responsibility for the problem to someone else, said Kusý. Also this behaviour indicates that he started dealing with this problem only when he could not circumvent it. He tries to find the last-minute solution and uses promotional, but a clearly untrue campaign.

This way will be the dominant tactic in the upcoming campaign, he added.