WILL he or won’t he? As of press time we have no idea whether Prime Minister Robert Fico will attend the May 9 celebrations in Moscow meant to mark the end of World War II. 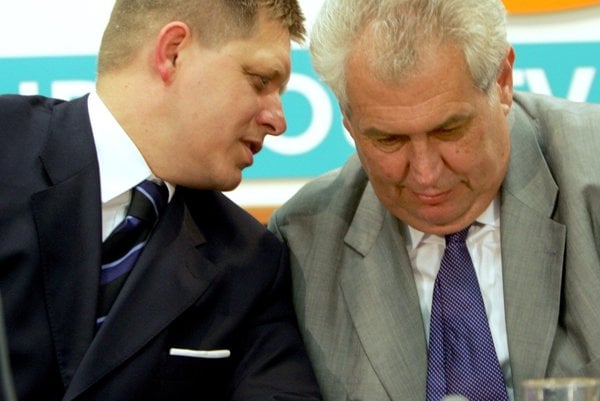 Botched public relations of Czech President Miloš Zeman’s office on April 10 indicated the two of them were destined to meet in Moscow – a clue that Fico at least told the Czechs he was going – but thus far the prime minister has not confirmed his plans. North Korea’s Kim Jong-un will be there, so either way the party is likely to be an interesting one.

There is no disputing that the Soviet Union’s Red Army played a key, and perhaps the key, role in defeating Hitler’s Nazi Germany in 1945. There is also no disputing that six years earlier the Molotov-Ribbentrop Pact split Poland between the two and ceded the Baltic states to the Soviets. The Red Army liberated much of eastern Europe, but also kept on “liberating” much of it all the way to 1989 – some 50 additional years. Hungary and the then-Czechoslovakia both had the unfortunate experience of being re-liberated by their comrades, in 1956 and 1968 respectively.

Zeman had been adamant that he would go to Moscow to honour Soviet soldiers who died liberating his country. This prompted condemnation from a gaggle of EU leaders, many in the Czech Republic itself and a public dispute with the US ambassador. Zeman then softened his stance and said he would skip the military parade, but stick around for the post-parade festivities. The Czech president is never one to miss out on a celebration – even occasionally before lunch.

Much like Zeman, Fico appears to have come to the belated realisation that attending the Moscow parade is about more than meets the eye. It is hard to understand how one might sit cheering as modern Russian military hardware rolls by. Paying tribute to the sacrifice of deceased Soviet soldiers from 70 years past is one thing, but what about the 298 civilians killed when Russian-backed separatists shot down the MH-17 passenger jet in Ukraine last year?

Just a month before that horrific July 2014 incident, Fico compared the potential presence of NATO troops on Slovak territory to the aforementioned 1968 Warsaw Pact invasion. Absurd as it was at the time – there are already 15,000 NATO troops in Slovakia, the Slovak army – it looks even more incoherent given the country is now slated to host a small logistics base as part of NATO’s rapid reaction force project.

In recent days, a shift in Fico’s tone has become more apparent. Speaking before the Slovak Foreign Policy Association on April 14 he said that Slovakia would not “go against the unity of international organisations, especially the EU and NATO,” and went on to criticise the Russian annexation of Crimea in his clearest terms yet.

Prior to this, Fico’s talk of the war in Ukraine had amounted to bland statements about sanctions harming trade and so forth. Ostensibly this was meant to play to some domestic constituency or another, though who exactly that was is unclear. The Slovak economy continues to grow.

Fico would criticise sanctions, then Slovakia would endorse them in Brussels. Fico was against a NATO base until he was for it. The prime minister is a domestic oriented politician and as the old saying goes – all politics are local. There is no sign that incoherent utterings about the war in Ukraine did anything to stoke his voting base. They do, however, confuse allies about the Slovak position on key economic and security issues and give the appearance that Fico has no control of the country’s foreign policy, which continues to walk the NATO and EU line.

Even if Fico thinks in purely self-serving terms, going to Moscow makes all of these things worse without any obvious benefits. Lay a wreath, say a prayer or give thanks that the Red Army helped defeat the Nazis 70 years ago, but stay away from a May 9 celebration that has more to do with the present than the past.

There is little need to share a toast with Kim Jung-un and if Fico wants to have a drink with Mr Zeman, he is surely welcome any time.