“IF WE only slightly expected any problems, a camera would be there for sure,” the Košice regional police head Juraj Leško told a press conference in reaction to Roma from the eastern Slovak village of Vrbnica who allege the police used unnecessary force. 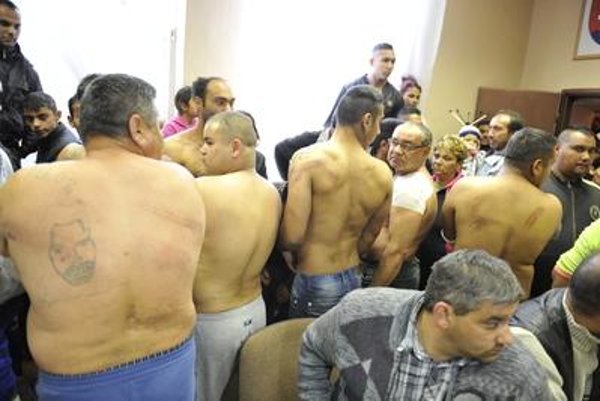 While the locals describe an April 3 police intervention in Vrbnica as brutal and violent, and displayed their bruised and injured bodies for cameras, police deny the allegations. The raid in Vrbnica is reminiscent of an earlier incident of alleged police brutality against Roma near Moldava nad Bodvou in 2013, where likewise no recordings were made.

The raid in Vrbnica was part of a large police action that took place on the morning of April 3 in which the police were looking for people who failed to show up to start prison sentences. The police raided 46 locations and found seven people they were looking for, but none in Vrbnica, public-service RTVS radio reported.

Two of the 46 raids were recorded on cameras, but not the one in Vrbnica.

The police did not use a camera during that intervention because they did not consider the place to be “problematic”, as Leško stated to the press conference, as reported by the Korzár regional daily.

Human rights watchdogs questioned whether the police should be selective in making recordings of their interventions.

“It would also protect the police who are often times unnecessarily accused, nevertheless it is suspicious that some raids led by the police have surveillance by cameras and others don’t,” Peter Pollák, the government’s proxy for Roma communities, told public-service radio RTVS.

Ombudswoman Jana Dubovcová insists that the police should record every such raid, “in order for the state to be able to prove how it behaved in a critical situation, because [the state] bears the burden of proof”, the ombudswoman’s spokesman Ján Glovičko told The Slovak Spectator.

Dubovcová has repeatedly called on the police corps president and the interior minister to make the recording of every police action obligatory, after a similar situation occurred in June 2013, when more than 60 police officers raided the Roma settlement informally named Budulovská outside Moldava nad Bodvou. According to eyewitnesses, violence ensued and 15 Roma were taken to the police station. Several of the Roma were injured and at least one of them contends that he underwent two more severe beatings at the police station itself.

But the rules have not changed since then and the law allows the police to record the raids but does not oblige them to do so. The Interior Ministry, however, is planning to introduce some changes to the law on the police corps regarding the use of cameras over the summer, according to the ministry’s spokesperson Ivan Netík.

“In order to be able to make camera recordings of actions no legislative change is required, since video and audio recordings are allowed to be made,” Netík told The Slovak Spectator, adding that in many cases the raids are indeed recorded and it is up to the commander of the raid to decide whether to record or not.

There are no concrete criteria for video recording of police raids. Thus it is unclear whether the police decided not to record the raid in Vrbnica but had recorded a police action against migrant smugglers.

Police claim recording all their raids would not be a problem if they had the necessary recording equipment at their disposal. The Interior Ministry admitted that the recording of police actions is a “technical and technological problem”, according to Netík.

“It will be necessary to buy the equipment and to archive the recording for some time,” Netík said, adding that the police have already submitted their requests and are waiting for financial resources.

The police intervention in the settlement near Michalovce allegedly left 15 people injured. The men claimed the police had brutally beaten and kicked them.

“Citizens who were working in community services at that time were attacked as well,” Tokár told Korzár.

The Michalovce hospital confirmed that a group of 15 people had been admitted to the hospital with light injuries that required outpatient treatment, Korzár reported.

“No persons were injured,” Leško told the press conference, as quoted by Korzár.

The raid in Vrbnica took half an hour and 15 police officers were deployed there, including officers from the emergency motorised unit, and dog handlers, but no SWAT units, according to the police.

“We object to the words that it was a brutal police raid, it is nonsense that someone wants to use against the police,” Leško said, adding that he was convinced the police were doing their job “well and right”.

It will be hard, however, for any investigative body to prove whether that is true or not, given the fact that without the recording it is the word of the police officers against the word of the injured Roma.

Pollák requested that the General Prosecutor’s Office and the Interior Ministry look into the allegations. He visited the village on April 4 to hear the account of the raid from the locals.

“I’m curious how the investigation will treat the medical reports and findings of the affected Roma, where the character of the injuries is stated,” Pollák said.

The ombudswoman will look into the case as well from the perspective of basic human rights and freedoms, Glovičko confirmed for The Slovak Spectator.

“She will focus on whether the raid was necessary and appropriate, as well as how it was prepared, run, managed, and what means and procedures were used,” Glovičko said, adding that since Dubovcová only has information about the police raid in Vrbnica from the media, she has requested an explanation and further information from the police corps President Tibor Gašpar.