Taking one for the team

Slovak politics in 2015 eerily resembles the tumultuous pre-1998 election period, with rumblings of an opposition coalition that could again dramatically alter the shape of the next government. 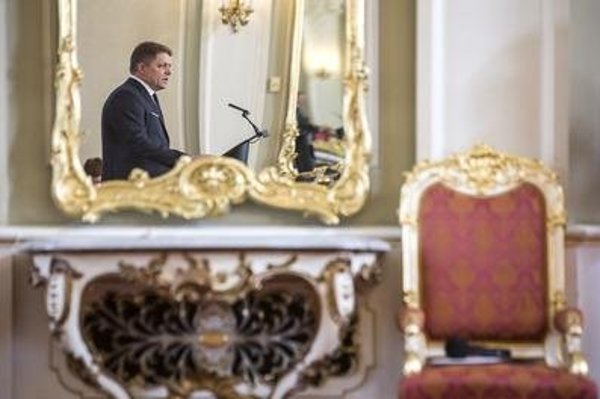 LIKE Vladimír Mečiar before him, PM Robert Fico is ensconced in a mini-Elektra above Bratislava castle, enjoying a luxury that is difficult to account for given his political income. The names Brhel, Široký and Výboh have replaced Rezeš, Lexa and Martinka, but the influence of oligarchs remains as clear and as cancerous as it ever was in the 1990s. And just as the wretched ‘self-kidnapping’ expressed the Mečiar government’s cynicism after the Kováč Jr kidnapping, Fico too has resorted to the ludicrous 'cherchez la Figel' to account for the mysterious insolvency of Prvá Slovenská tunelárska (meaning First Slovak Tunnelling in English while the verb tunnel has become in Slovakia a synonym for embezzle), Váhostav’s prophetic original name.

The most recent voter preference poll (Focus, April 14) gave Smer and the Slovak National Party (SNS) a bare majority, with 78 seats out of 150. This means the opposition is within striking distance of victory in 2016 – providing that the proliferation of tiny parties doesn’t result in thousands of opposition votes being lost.

The mooted coalition between Igor Maťovič, Daniel Lipšic and Richard Sulík is no second coming of the Slovak Democratic Coalition (SDK, a predecessor of the Slovak-Democratic and Christian Union – SDKÚ), nor will it challenge Smer for poll position in forming the next government. But for SaS and NOVA it is a sensible way of protecting votes (and parliamentary mandates), while it relieves OĽaNO of the heart-stopping prospect of having to fill government seats from its own ranks if actually called on to do so (Helena Mezenská, say, for Economy Minister). Such a coalition would also give the opposition a fourth roughly 10-percent member, which as we saw in 2002 and 2010 is how center-right governments in this country tend to look.

Sulík is apparently the only of the three leaders who remains to be convinced. Understandably so – with his EP seat he could swallow even a 3 percent result for SaS without having to look for another job. But given that Sulík’s vanity and obstinacy played such a role in the fall of the Iveta Radičová administration, perhaps even he would admit that he owes us one.