PM did not invite extremist governor to lunch

PRIME Minister Robert Fico met with seven governors of Slovakia’s eight self-governing regions at the lunch. The only one missing was Marian Kotleba, head of Banská Bystrica Region, whom he did not invite. 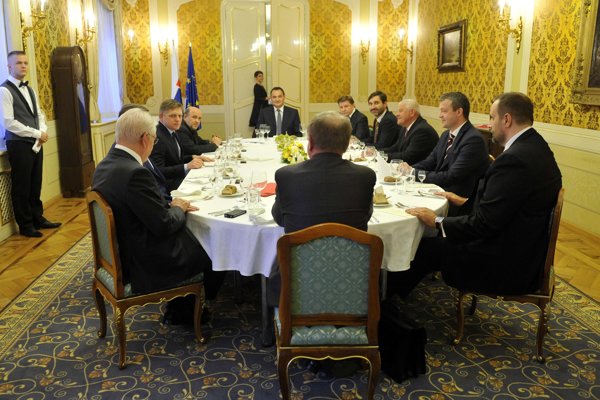 Instead, the lunch was attended by former speaker of parliament Pavol Paška.

Fico explained his decision by saying he finds it difficult to sit behind one table with a person who has absolutely opposite values to his own (referring, for example, to the end of World War II or the defeat of fascism) and who has wasted huge possibilities of Banská Bystrica Region (BBSK) regarding the EU funds.

“Thus I saw no reason for communication with the head of Banská Bystrica Region,” Fico said, as quoted by the SITA newswire.

The representatives of BBSK, however, consider it arrogant.

“The fact that [Kotleba] was the only regional governor not invited to the meeting is another expression of PM’s disrespect to the principles of democracy,” said BBSK spokesperson Vladimír Gürtler, as quoted by the TASR newswire.

Other regional governors, however, defended Fico’s decision and repeated that they see no reason for sitting with Kotleba behind one table, said Tibor Mikuš, head of Trnava Region, as reported by TASR.

The lunch was, however, attended by former speaker of parliament Pavol Paška, who left his post over the scandal with an overpriced purchase of a computed tomography device by the Piešťany hospital. Aside from him, also head of Fico’s advisors Vladimír Faič and head of the PM’s office Roman Šipoš were present, the Denník N daily wrote.

The last time Paška officially appeared in public, before announcing his resignation, was the Košice conference on the Ukrainian crisis in March, which he opened. Fico said shortly after Paška’s departure that he would be responsible for the foreign policy agenda of the Smer party “since there is much of it, but he will mostly help me in political questions of Smer, i.e. with communication with other parties and internal communication”, as reported by Denník N. Paška’s function changed to professional deputy chair of the party.

His competences were extended yesterday, when he became responsible also for the contact with regional and local administration, Fico’s spokeswoman Beatrice Szabóová told the daily.