Principled ownership is the only recipe for journalistic freedom. 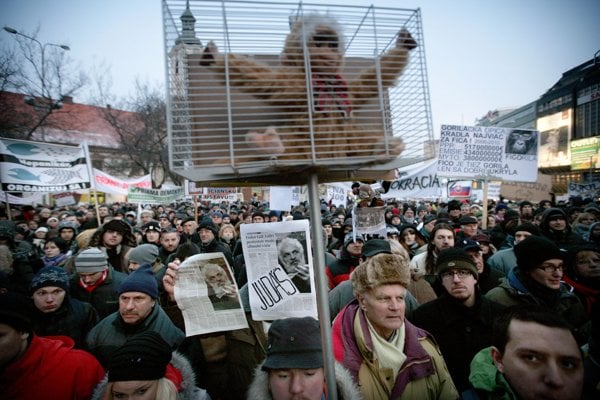 LOOKING back, September 1995 probably wasn’t the most auspicious time to take a job in Slovakia.

The Vladimír Mečiar government had just introduced new work permit requirements for foreigners, which involved a lot of police documents and medical tests and carrying around embarrassing samples of waste. But no one – including the police – seemed sure of exactly how the process should work, resulting in my lecturing for the first three months of my Žilina university job as an unpaid volunteer until my permit was finally issued.

Perhaps the police were distracted. After all, in August 1995 the son of the Slovak president had been allegedly kidnapped to Austria by the secret service and police SWAT team officers, so there was an investigation to be suppressed and plenty of witnesses to be intimidated. There was also the explosion of organised crime under Mečiar, which wasn’t to be suppressed so much as timidly ignored and then laboriously cleaned up after.

So it’s fair to say that Slovakia had other fish to fry and took little notice of me or any other English teacher in the mid-1990s. I knew equally little about Slovakia, except for the tiny corner of the country represented by my school and friends and a few Žilina running routes and bars. I lived, uncertain of the wisdom of my emigration, on a tiny English-speaking island, surrounded by an intimidating sea of Slovak-ness – an alien language, unpleasant bureaucrats, an impenetrable culture and, always, dark tales of kidnapping and murder and “state capture” passed on by Slovak friends. 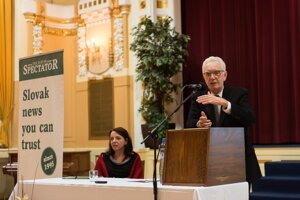 But knowing nothing about your host country becomes oppressive, and as time passed I started to take a closer interest in these morbid tales. Coming from a sleepy, nerdy democracy like Canada, where society works and the law is widely respected, it took me a long time even to believe, far less to understand how things worked in Slovakia.

How government ministers could simply grab the best public assets for themselves and their friends, paying an average of 10 percent of their market worth. How a secret service and a police leadership could consort with gangsters, bartering freedom from prosecution in return for assistance with sordid tasks that even Mečiar’s henchmen refused to perform. How a ruling coalition could sabotage the country’s chance of Western integration, flirt with Yeltsin’s Russian kleptocracy, and oppress democratic opposition at home.

And how all of this could happen without voters filling the streets in protest.

I learned much of what I needed to know from The Slovak Spectator, a schizophrenic bi-weekly torn between reporting the full truth of Mečiar’s excesses, and pulling its punches in order to attract at least some advertising. In early 1997 they announced they were looking for freelancers, and without any great seriousness – since I was destined to be a Great Writer, after all, not a hack – I applied. And in doing so discovered the greatest profession of them all.

What an odd bunch they were. Four Americans in their mid-20s, serious as only young men can be when starting their first company. Two of them strove mightily to keep the paper afloat while the other two laboured to understand the country whose turmoil they chronicled. They were supported by a Slovak deputy editor with waist-length red hair, a penchant for drinking beer at work, and a loathing of Mečiar that frequently poisoned his pen. By a blue-eyed, blonde sales executive with a practiced knack for reeling in clients. By a quietly anguished 16-year-old with formidable journalism skills and a mother in jail. By a rotating cast of freelancers, some of whom wrote humblingly well, and others who drew groans of ennui from their weary editors. By a committee of diplomatic spouses who swooped in on print day to gently point out the most egregious errors.

How often I wished, in those early months, that I knew more about journalism, or that there was a benign Lowell Bergman character to at least teach me the ropes. I made egregious mistakes, like dismissing an Up With People concert as “cultural onanism”, and bitterly regretted the youthful arrogance it betrayed. I constantly wished I spoke the language better, to be more sure of my quotes; or that I knew the country better, to have a surer sense of context. I was often ashamed.

But that shame was a constant lash to improve. And as a first experience in journalism, the Spectator was an awesome apprenticeship. There was so much going on in Slovakia – bizarre, wrong-headed, evil and faintly comic at the same time – that you didn’t dream of embellishing it. You fact-checked because you yourself couldn’t quite believe you had the facts right. There were no puff pieces, no corporate PR posing as news, because the business community was largely Mečiar-positive, and regarded us with deep suspicion. We worked with the paper’s owners, and debated editorial decisions freely. No stories were spiked: on the contrary, after Mečiar thwarted a referendum on NATO membership in 1998, the paper toughened its criticism through editorials that put us on the “black list” of media the government refused to communicate with.

Apart from a brief stint back in Canada in 2003-2004, I spent a decade with the Spectator, even (improbably) serving as publisher. The paper had an ownership that was a journalist’s dream – two of the original American founders stayed on, joined by former war reporter Alexej Fulmek, head of the Petit Press publisher. The only limitations on what stories we covered and how we told them lay in the stuff between our ears. I know how many journalists claim the same, but eight years after leaving the Spectator, I realise how good we had it.

I know, for example, that had I remained at the Spectator, the Gorilla file would have been reported years before it actually appeared in the Slovak press. We would have been sued, and – worse – ignored by the rest of the Slovak media establishment. But we would have written the story, and not hidden the file in a safe until its publication on the internet made it impossible to ignore. Maybe that would have nixed the chance of even a brief interlude from Róbert Fico’s neo-oligarch reign – but it would have been stand-up journalism.

I left the Spectator in 2007 to take a job doing investigative journalism at Sme, the most stand-up Slovak broadsheet, followed in 2010 by a stint at the Trend weekly. It was a natural progression, just as it was for many Spectator journalists who went on to write for AP, the Wall Street Journal, the Financial Times and others. It was time to submit one’s craft to the critical eyes of a larger and far more engaged and informed audience. But it was also a venture into a murkier world of inscrutable editorial decisions, of journalism with a political agenda beyond a reporter’s conscience.

These days, with advertising in deep decline, ownership and flak are the only of media critic Noam Chomsky’s five filters still shaping how the Slovak media cover stories. And what a dispiriting, aggressive group these owners are! Oligarchs dominate, from the mercurial Ivan Kmotrík at the TA3 news channel, to Slovakia’s richest man, Andrej Babiš at the Hospodárske Noviny business daily. The J&T financial group, with roots in Mečiar-era crony privatization, controls the JOJ TV station, while their counterparts at Penta own the Trend business weekly, the Pluska tabloid weekly and daily, the news portal aktualne.sk, as well as a minority stake in Petit Press, which publishes the Sme daily and The Slovak Spectator. The largest tabloid, Nový Čas, is nominally still independent, but publisher Peter Mertus departed last December to head Penta’s media operations. The Pravda daily, meanwhile, was marketed by oligarch Jozef Brhel, close to Prime Minister Róbert Fico’s Smer party.

Even the start-up Projekt N, led by Sme defectors, is controlled by the Eset international software company, while the small-market weekly Týžden has allegedly been financed by Penta since 2009, according to sources at Penta.

I understand how tired people must be of journalists grousing about their lot. Of laments for the golden era, and imprecations to consider again how important vibrant journalism is for a healthy democracy. The world is changing, and we must all find our places in it. In that changed world, there are a few things that provide hope. Alexej Fulmek is one of them.

Having managed with Slovak owner Peter Vajda to fight off Penta’s 2014 acquisition bid, and forcing them into minority ownership of Sme and The Slovak Spectator, Fulmek and Vajda continue to wage a battle that is probably ultimately doomed, and has been fought at an enormous loss to Sme’s journalistic corps. But that has proven enough to hold the pass, for now.

I’ve known Alexej since 2000, when his Petit Press first bought a stake in the Spectator. He has immense faith in his own talents and an equal disdain for numskulls. He runs the largest publishing house in the country as a meritocracy with himself astride it, a place where talent redeems but disloyalty disqualifies.

He was the one who in 2012 published my book on the Gorilla scandal – for all that he grieved for his friends on the political right wing that it hurt – and it was he who defended it against multiple lawsuits filed by Penta and others. It was Alexej who fended off Penta’s attempt to take over Sme, despite the departure of more than 50 Sme journalists to found Projekt N. He staked his career and reputation on it, gifting Sme years of life as the Penta vultures circled. And it is because of his belief in committed journalism that The Slovak Spectator has survived its 20th anniversary.

Those early Spectator years are gone, and their stirring enthusiasm too. Mečiar was defeated, Slovakia joined the EU and NATO – but without another fort to capture, it’s as if the vision of what an independent Slovakia could be has been lost.

Much of this is due to Gorilla, not so much through what it revealed about how politics is really conducted, but because it has not resulted in any indictments, far less jail terms for traitorous politicians and oligarchs. A grave injustice unpunished is often more harmful than the original wrong itself.

I doubt that the Spectator will survive another 20 years, or even that Sme will endure. But many of us who were there in the lean years will find a place wherever we can still tell the truth. I will, and so will my editor Dan Borský, who – after I got beat up in January 1998 by assailants the police believed were secret service – slung an arm around my shoulders, plunked a beer in front of me and turned up the radio as I blubbered.

And then we got back to the work of reporting the news.