SLOVAK President Andrej Kiska visited the the ÚĽUV centre of traditional arts and crafts in Bratislava where he met 80 laureates of the honorary title Master of Traditional Folk Art. 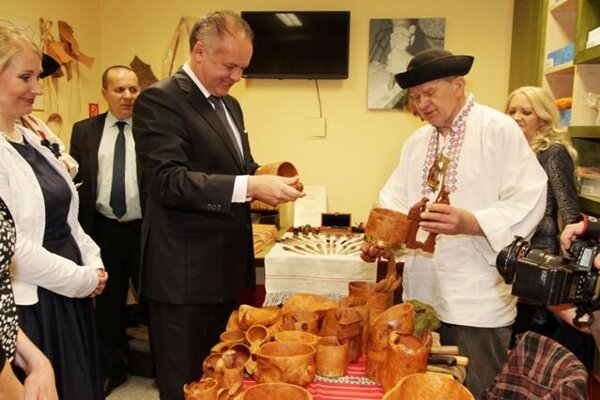 The meeting on April 22 was initiated by ÚĽUV which celebrates the 70th anniversary this year; it wanted to pay tribute to those who continue the heritage of ancient crafts.

Selected craftspeople – men and women – demonstrated their skills to president, varying from pottery, to woodcutting, lace-making, to bag-making and other crafts. Part of the meeting was also the visit of the current exhibition at the ÚĽUV shop, Our Story-70 Years of Supporting Traditional Crafts in Slovakia, which depicts the history – all the way from old hand-made products to modern design of contemporary artists. A total of 470 items are exhibited, from a plate from Dobrá Voda from 1829, to contemporary work. The exhibition lasts until September 26.

Kiska is his address appreciated, as quoted by the TASR newswire, the cultural contribution of talents to our modern era, and their share in forming the nation’s identity.