Europe is not threatened by a few dozen motorcycles, but by the national mood that produced the Night Wolves’ visit. 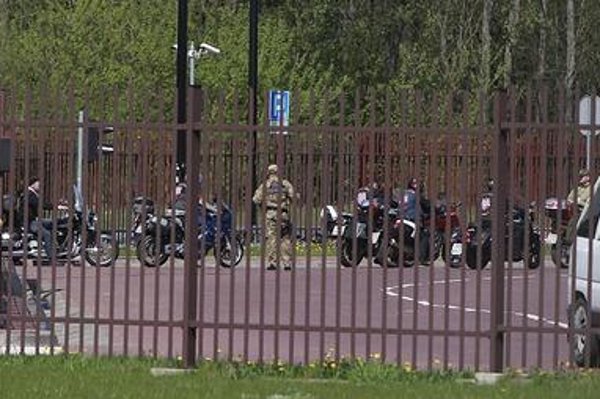 A group of Russian bikers who wanted to reach Berlin to mark 70th anniversary of Soviet contribution to the victory over Nazi Germany return to Belarus after being denied entry into Poland on administrative grounds, in Terespol, Poland on April 27. (Source: AP/TASR)
Font size:A-|A+0

Growing up in Canada in the 1970s, kids would attach hockey cards to their bicycle wheels. The spokes would beat the cards with a thwapping sound that, to a child’s ears, recalled the growl of the intimidating Harley motorcycles that cruised rural roads with their bearded, leathered owners. It was the era of the iconic film Easy Rider, and bikers were the essence of cool – self-reliant, tough and manly.

Decades have passed, and Easy Rider’s descendants have squandered the cultural cachet that was so unwisely bestowed upon them. Police and media attention exposed North America’s biker culture as racist, sexist, and criminal. Nowadays, bikers are considered a nuisance, if they are considered at all.

Which is why the furore over Russia’s Night Wolves bike club, which plans to ride from Moscow to Berlin to celebrate the end of WWII, seems so anachronistic in the West. Even in their heyday 40 years ago, bikers were never geopolitical heavyweights deserving of bans like those that Poland and Germany have levied on the Night Wolves. They belonged to the same poor, uneducated class that in America are dismissed as “white trash”. They scowled and posed and made the night hideous with primitive revelry – but they never threatened the social order, and never required harsher repression than a traffic cop’s ticket.

But the Night Wolves are no ordinary bike gang. They have the backing of the Kremlin and supported the anti-Maidan rebellion in Ukraine last year. Moreover, they fit perfectly into Putin’s strategy of taunting the West with expansionist Russian braggadocio that the Kremlin can gleefully distance itself from. The West, in turn, must either tolerate the Night Wolves’ provocations, or humiliate itself by responding to them.

What is worse, the Night Wolves are no counter-culture on the fringes of a staid Russian establishment. With their aggressive nationalism, their anti-gay and anti-American jibes, they are no extreme than Putin himself, who claims to have considered putting Russia’s nuclear arsenal on full alert during his assault on Crimea.

The visit of the Night Wolves will likely be remembered as a farce that petered out at the Polish border. But what it reveals about Russia’s current mindset, and the country’s penchant for immature, hot-blooded posturing, is deeply sobering. We can perhaps afford to ignore those motorcycles, but not the growing sound of hockey cards striking bicycle spokes east of the Urals.