​ THE NIGHT Wolves, a reportedly ultra-nationalist motorcycle club with close ties to Russian President Vladimir Putin, are planning to make an appearance in Slovakia on their way to Berlin. Some Slovaks see this as a provocation and would like to see them barred from the country. 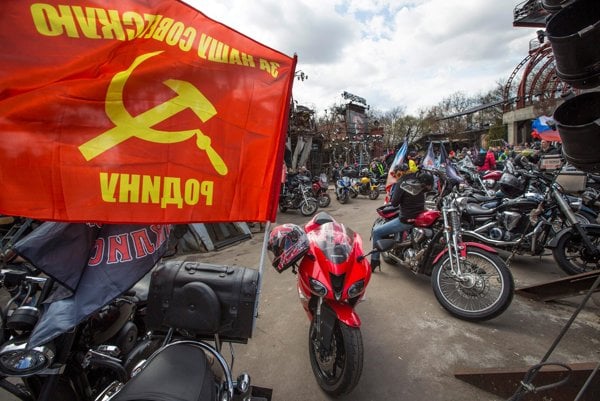 Some 50 bikers set off from Moscow on April 25 for the about 5,000-km long journey that is to follow the route of the Red Army as it liberated eastern Europe up to Berlin towards the end of the war.

They were planning to reach Slovakia on May 2, but it is not clear how their journey will progress as Poland and Germany already announced they were denying the prominent members of the club entry to the country, calling the rally a provocation. 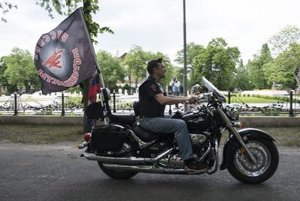 The Russian Embassy in Slovakia refused such claims.

“They want to visit the capitals where fights took place and honour the deceased soldiers,” said Embassy Secretary for Cultural Affairs Sergey Cherkalin, as quoted by TASR. “They want to lay wreaths at Slavín memorial.”

There are, however, serious concerns in the countries along the route concerning the ride of the Wolves. Although the members claim they are mere tourists and their ride is just a symbolic commemoration, some perceive the whole event as a provocation.

“It is not just a motorcycle club, it’s a political, I’d even say semi-military power,” Slovak President Andrej Kiska said in an interview with the Sme daily when asked about the gang’s ride through Slovakia, calling the gang’s rally a display of arrogance and power.

With similar arguments in mind, 75 publicly known people have signed a letter from April 24, thus joining activists from other countries calling on Ukraine, Slovakia, the Czech Republic, Poland, Austria, and Germany, to ban the members of the gang from entering their countries and to not allow them any public gatherings.

The fact is that some of the prominent members of the gang, including the leader Alexander “Surgeon” Zaldostanov, are on the sanction lists of the United States and Canada due to their part in the annexation of Crimea. Zaldostanov is reportedly Putin’s personal friend.

“The message of the motorcycle gang Night Wolves is not the defeat of fascism, freedom and peace, but a support for the expansion of the Russian state abroad,” the letter reads, charging that the Night Wolves “spread hatred towards Ukraine and they are the bastion of anti-Ukraine activities in Russia”, “spread hatred, fear, and violence”, and are “a political tool in the services of the Russian ruling power”.

Having said that, the members of the gang deserve to be included in the sanctions of the EU towards Russia and they should be banned from freely moving in the EU, the activists believe.

The Slovak authorities are, however, limited by the laws as for what they can do in the matter, the Foreign Ministry noted in reaction to the letter.

“It is a fact that none of the participants in the ride requested our authorities to issue a Slovak visa,” the Foreign Ministry’s spokesperson Peter Stano told The Slovak Spectator. “The visa for entering the Schengen area were issued by otherSchengen countries rather than Slovakia.”

Non-EU citizens, as long as they have valid Schengen visas, don’t appear on the sanction list of the EU, and respect the country’s laws, are allowed to stay in Slovakia, which “doesn’t have any legal means to limit their stay or movement in the country”, according to Stano.

Nevertheless, Germany and Poland have already denied entry to some of the members of the gang.

"Leading members of the Night Wolves will be refused entry into Germany. Visas obtained under false pretences have been canceled," the Reuters newswire cited the German government sources, without giving more details. 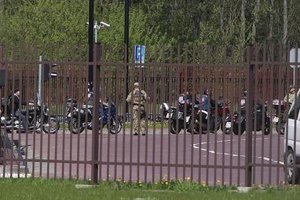 Poland said on April 24 it would not allow members of the group to cross its border and enter the European Union's territory. Several members of the gang have attempted to cross the Belarusian-Polish border on Monday April 27 as planned, but were denied entry. Zaldostanov said they would attempt again on Tuesday, the gazeta.pl news portal reported.

It is thus unclear whether the bikers will reach Slovakia on May 2 as planned.

The club has not turned to the Slovak authorities regarding their ride through the country, but the Russian Embassy in Bratislava has officially requested assistance in that matter, Stano from the Foreign Ministry said.

“Should any activities of this group that exceed the legal framework occur, we have no doubts that the respective state institutions will take adequate steps and measures,” Stano added.

The police are monitoring the planned movement of the gang in Slovakia, the Police Corps president’s spokesperson Marianna Paulíková told the SITA newswire, adding that should any complications arise, the respective units of the police shall be ready to intervene.