JUST few days before the deadline for submitting bids for acquiring the 66-percent share in the country’s biggest electricity producer Slovenské Elektrárne (SE), now up for sale by the Italian energy group Enel, Prime Minister Robert Fico announced that the state wants to increase its 34-percent stake. 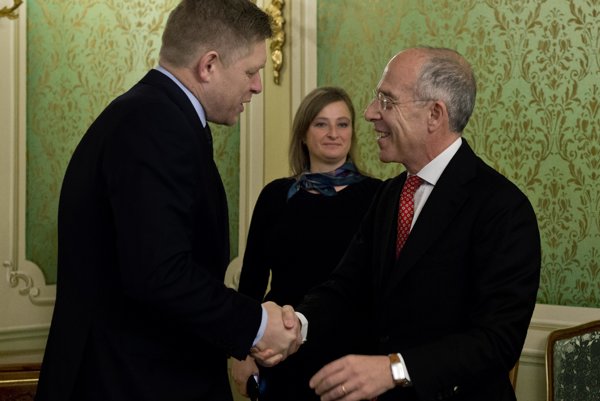 But a parallel dispute between the state and Enel over the Gabčíkovo hydroelectric power plant has both sides demanding hundreds of millions of euros in compensation from the other.

Fico announced his government’s plans to Enel CEO Francesco Starace at a meeting in Bratislava on April 29.

“The Slovak cabinet will enter the process of talks with Enel with the aim to strengthen the positions of Slovakia in SE,” Fico said after meeting Starace as cited by the SITA newswire. “We want to return the state into the position in SE which it deserves.”

Slovakia will be interested in obtaining at least 17-percent stake out of the 66-percent share offered for sale. Obtaining managerial control is matter of course, according to Fico. This would boost the state’s share to 51 percent, while Fico has already indicated that the deal might be financed from proceeds from the sale of the state’s minority stake in Slovak Telekom.

“We will not go into any adventure,” said Fico. “We will go only in such decisions, which will strengthen the position of Slovakia in SE in order Slovakia also controls this company. Everything is a question of price.”

Slovakia will closely watch with what bids other potential bidders will arrive by the deadline of May 9.

Starace does not see any problems in plans of the Slovak government.

“This is one of solutions, but not the only one,” said Starace as cited by SITA. “Yes, we have the right to sell this stake… It’s a good idea that the cabinet will join.”

According to Starace, Enel firstly wants to complete the process of getting formal bids and afterward it will asses the best solution. It may happen that Enel will sell only a portion of its stake and keep the rest.

Fico reiterated that his cabinet would obstruct the sale of the 66-percent share until the Italians commit to secure completion of the new reactors in Mochovce.

Italy’s Enel announced the sale of its stake in SE and other assets in 2014 as part of efforts to cut its debt load. The deadline to submit bids is May 9 while recent disputes between the government and the power utility may distract potential bidders. Czech company ČEZ has already indicated that under the current negative stance of the Slovak government makes them less like to bid.

On the other hand, Hungary’s MVM Group in a consortium with Slovakia’s Slovnaft confirmed on April 24 that it is still interested in the stake. Czech-Slovak financial group Energetický and Průmyslový Holding (EPH) as well as Finnish Fortum are also mentioned as potential bidders.

Animosity between Fico and the Enel ownership group is driven by the still uncomplete nuclear power plant in Mochovce, which is four years late, but more recently a hydroelectric power plant on the Danube River generating about 7 percent of the country’s electricity has become a bone of contention. Both the state and SE claim the other owes them hundreds of millions of euros.

First the state terminated the contract for operation of the Gabčíkovo hydropower plant in December 2014 and the state-run Vodohospodárska Výstavba took over management of the plant on March 10.

Fico has been criticising the sale of the majority stake in SE for €840 million to Enel as well as SE’s contract to operate Gabčíkovo for 30 years. He sees the return of Gabčíkovo as partial redressing while he has repeatedly accusing SE for not fulfilling duties resulting from the contract on operation of Gabčíkovo. SE has denied all the allegations.

Meanwhile the Regional Court in Bratislava decided on March 9 that the contract for operation of the Gabčíkovo hydropower plant is invalid because instead of a direct agreement with SE, a public tender should have been announced.

SE, which argues the contract remains valid, responded that it intends to challenge the verdict and seek compensation for lost profits. Already on April 20 it turned to the state claiming €588 million in compensation for losing the rental and operation of Gabčíkovo hydroelectric power plant minus costs.

The power company cited the privatisation agreement it signed with the National Property Fund (FNM) during the second government of Mikuláš Dzurinda (2004-2006) with the rental of Gabčíkovo as part of this agreement. Based on agreements on operation of Gabčíkovo they claim that they have the right for compensation for losing 35 percent of revenues from selling the electricity for 30 years in case of termination of the agreement.

“We have suffered enormous damage and we will not leave this unsolved,” SE CEO Nicola Cotugno told Hospodárske Noviny economic daily on April 17, recalling that when Enel submitted its bid for the 66-percent stake, it also involved Gabčíkovo.

After the verdict about the invalidity of the contract on Gabčíkovo came into force on April 28, Fico announced that his government will send a letter to Enel demanding back the €492 million that SE gained from operating Gabčíkovo for nine years. This amount includes interest. If Enel refuses to pay, the government will take legal action, said Fico. In its response SE confirmed that they will use all legal means for protection of their claims at local as well as international courts as well as their claims for €588 million in compensation.

Plans to complete two more reactors, bring the total to four, at the Mochovce nuclear plant were launched in 2008. The original €2.8-billion plan was to complete the third reactor unit in 2012 and the fourth in 2013. Later the budget was increased to €4.6 billion and deadlines extended to 2016 and 2017, respectively.

As the construction is financed also from SE’s dividends, the postponement of the completion means less money in the state coffers. Moreover the feasibility of the project is being questioned after the fall of electricity prices in Europe.

Nevertheless, Fico insists on completion of Mochovce and indicates that he will prevent Enel from leaving Slovakia before it completes both reactors.

“We will actively obstruct it [the sale of the 66-percent stake],” said Fico as cited by SITA on April 17.