THE WORLD championship in lesser-known, new technology of brewing coffee – AeroPress – was won by Slovak Lukáš Záhradník. He beat the strong competition of 36 contestants from all over the world in mid April in Seattle. 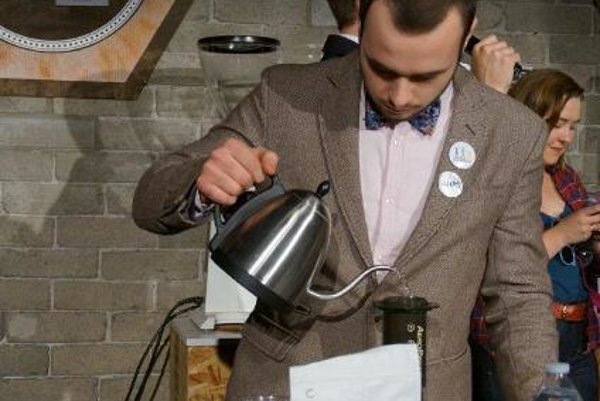 Aeropress is an innovation, invented by Alan Adler in 2006. The goal was to make a cheap, portable coffee machine able to brew coffee in an effective way, offering freedom in creativity. It became popular with many people, including coffee celebrities. Compared to traditional competitions, AeroPress ones are much freer: save for time limit, the same type of coffee for all and the same type of use of alternative preparation, contestants are in no way limited in recipes and styles. They can come up with their own recipe before the competition (and sometimes even during preparation or the competing), in order to find the best profile of tastes.

“Coffee is the passion of my life,” Lukáš Záhradník, world champion, said as quoted in a press release. “Thanks to my girlfriend Simona Madleniaková – who is a barista at Green Plantation coffee-roasting plant in Komárno – I found out what I want to focus on, and now I am devoted to coffee with all my heart. This championship is a proof that if you give your soul into the coffee, it will taste classy.”

“The coffee Lukáš competed with comes from Costa Rica and the variant is Sl 28, planted prevailingly in Kenya,” Valerian Hrala of Green Plantation explained. “So the competitors had quite a difficult task to balance, in regard to taste, the fragrant characteristics of two very differing worlds. However, Lukáš chose the winning technique which reflects the approach of Green Plantation to preparing of AeroPress and which is identical with his personality – simple means beautiful.”

This is already the second time a Slovak was awarded in this competition; last year, Martin Karabinoš who represented Dublin Café Prešov became vice-champion.

The winning recipe: Inverted method – 20 grams of coffee ground on a finer filter; Water temperature – 79°C; Add 0.6 dcl of water, 15 seconds mix by turning the AeroPress, 30 seconds of “blooming” (let the coffee with the water rest); add the remaining water; press for 45 seconds. The total time of preparation – 1.37 minutes.