MIGRANTS living in Slovakia still struggle when trying to integrate into Slovak society. 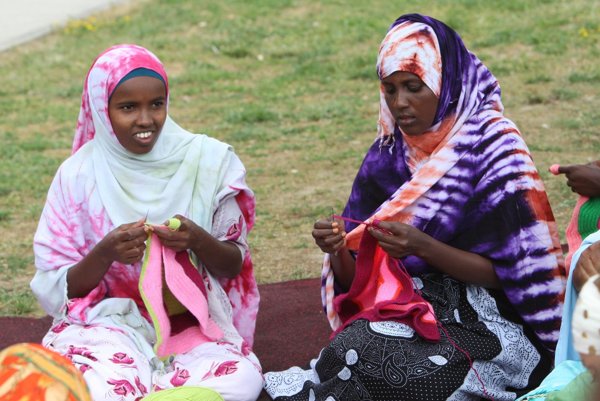 In the previous report from 2009 it also ranked poorly: placing 29th of 31 surveyed countries.

“We often hear from our politicians that Slovakia is only a transit country, so we do not have to develop any policies as nobody wants to stay here,” sociologist Oľga Gyarfášová of the Institute for Public Affairs said, as quoted by the SITA newswire. The question is whether the low interest of migrants is not caused by the conditions in Slovakia, she added.

Though the migration and integration are described as a problem, it contributes to the society’s development, said Martina Sekulová of IVO.

“Claiming allegiance to this value would significantly help with forming migration policies,” she added, as quoted by SITA.

According to her, about one-third of migrants come from non-EU countries, especially from Ukraine, Serbia, Russia, Vietnam and China. Regarding the total population, they comprise only about 0.5 percent.

The migration to Slovakia rose significantly after Slovakia joined the European Union and the Schengen Area, and especially after Romania and Bulgaria joined in 2007. The growth culminated in 2008 when it stood at some 9,000 people a year. However, it decreased with the start of the economic crisis and stabilised to about 5,000 annually, said Danuša Jurčová of Infostat.

The most frequent reasons for them to come are work, studies or family reunion, Zuzana Vatráľová, head of the office of the International Organisation for Migration (IOM), told The Slovak Spectator.

Slovakia, however, still belongs to countries with a relatively low number of foreigners. In 2013 nearly 72,000 foreigners lived in the country, which was 1.3 percent of the total population. In the Czech Republic it was 4 percent, according to the Demographic Atlas publication.

Slovakia adopted its concept of integration in 2009 and an integration policy in 2014, making it one of the last member states of the European Union to do so. It has not made big progress in promoting integration since 2007, when it first appeared in the MIPEX report, except for strengthening its anti-discrimination laws. However, only very few people know about their rights to take steps forward, the report reads.

Struggling to get a job

The report also suggests that Slovakia applies only a minimum approach on the level of the basic EU standards. It also points to the insufficient monitoring and evaluation of policies having an impact on the integration of foreigners and the missing research of needs and problems.

“Our practice shows that the most frequent problems foreigners in Slovakia face are the language barrier and difficult process of getting documents concerning residence at Slovak local authorities,” Vatráľová said.

The language barrier was also a problem for Gustavo Adolfo Pizano who came from Columbia six years ago.

“The Slovak language was kind of advanced Chinese for me, so listening to the police or any authority seemed the same to me, but then my wife tells me how rude the person was talking to me/us,” Pizano told The Slovak Spectator.

This, however, changed after he learned more Slovak and was able to speak for himself, he added.

Kaloyan Frengov of Bulgaria, who came to Slovakia four years ago and settled in Bratislava, described one of the situations at the local authorities in the beginning of his stay. He applied for the residence card of an EU citizen. The foreign police asked him for permission from the owner of the place he lived in order to get the card. Since he missed the deadline set to two weeks after entering the country, as nobody told him to do it, he had to pay €90.

“Because, as you can imagine, none of the owners of the places I have rented so far wanted to give this kind of permission, as they were afraid of needing to declare the money from the rent and pay taxes,” Frengov told The Slovak Spectator.

The most criticised area in the MIPEX report is, however, the approach of foreigners coming from countries outside the EU to the Slovak labour market. The country placed 37th in the evaluation.

The legislation is disarranged, complicated and fragmented to various types of jobs, Gyarfášová said.

“But we know that placement in the labour market is one of the most important aspects of integration into society,” she added, as quoted by SITA.

Too long to get citizenship

Another problematic and peripheral sphere is medical treatment. Not only Slovakia, but the whole central European region is characterised by restricted policies and measures which should enable better access of migrants to medical treatment. The policies are also weak when it comes to reuniting families and education. Most non-EU citizens also are excluded from democratic life.

Slovakia also belongs to countries where it can take too long to receive citizenship. They need to wait two years, which is one of the longest periods in Europe, according to the report.

“The lowest and most inequitable naturalisation rates in Europe keep most non-EU citizens in a relatively insecure status, with potentially negative side-effects on their integration outcomes,” the report reads.

In Poland or the Czech Republic the situation has improved, said Thomas Huddleston of MPG.

This article is published as part of Spectator College, a programme created by The Slovak Spectator  with the support of Petit Academy Foundation. A glossary of words as well as exercise related to this article are also published online.