I did not have any real reason to have chosen Slovakia, other than the unremarkable fact that I spoke English and was at the ripe young age to be pining for an adventure. 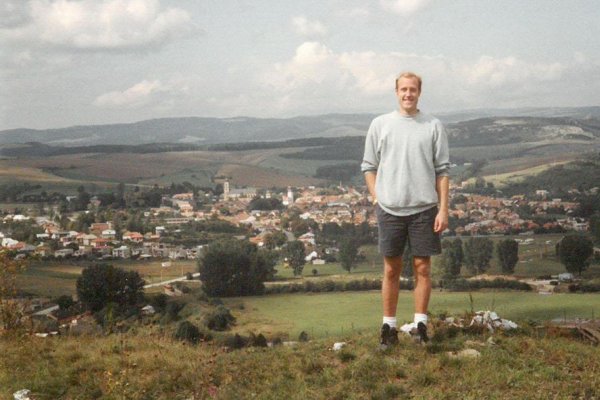 MY FIRST real introduction to Slovakia – the moment when I realised I was going to be here awhile – was when a portly, middle-aged man and his daughter with dyed-blonde hair and overdone make-up picked me up in their dusty, well-travelled car.

That was late August 1993, and I had arrived a few days earlier, in the second wave of teachers recruited by the well-intentioned but misnamed outfit “Education for Democracy”. The three-day, in-country orientation was more of a coddling exercise – expatriates hanging out with expatriates, mostly – and so when I squeezed myself in the back of the father-daughter vehicle somewhere in downtown Bratislava, I knew there was no turning back. 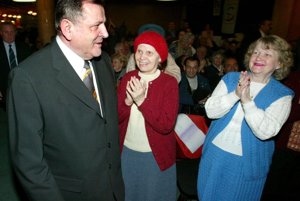 I vaguely knew where I was going, and really little more. The place was Spišské Vlachy, I had been told in a letter I received one spring day while working in a congressional office in Washington, DC. I would live with a family. And, I would teach English at some school there for one year. That was all I knew.

I did buy a map and I studied it long and hard before I left America. As I pored over it, I wondered about my destination. Spišské Vlachy seemed to be a dot in the hills, and definitely a long way from any city I had ever heard of.

After a five-hour journey in the car marked exclusively by awkward silence (I spoke no Slovak; they spoke no English), we arrived in Spišské Vlachy and pulled up to a well-appointed, two-storey house, located nearly on the outskirts of town. Within moments, a bespectacled, beaming woman burst out the front door and greeted me, saying “Reetchard!” She embraced me, kissed me once on each cheek and led me by the arm into the home. Inside, she presented me with slippers, and motioned me into a spotless room furnished with a dining table, some glass cabinets with fine china and glassware and a white, furry throw rug that I later learned was the hide of the family dog.

There I was feted like a king, served meat and potatoes and given vodka in a thimble-shaped glass that was never allowed to go completely empty. All the while, my Slovak mother buzzed around me – serving more meat here, another helping of potatoes there, a splash of vodka for good measure – attending to me so intently that I began to feel embarrassed. 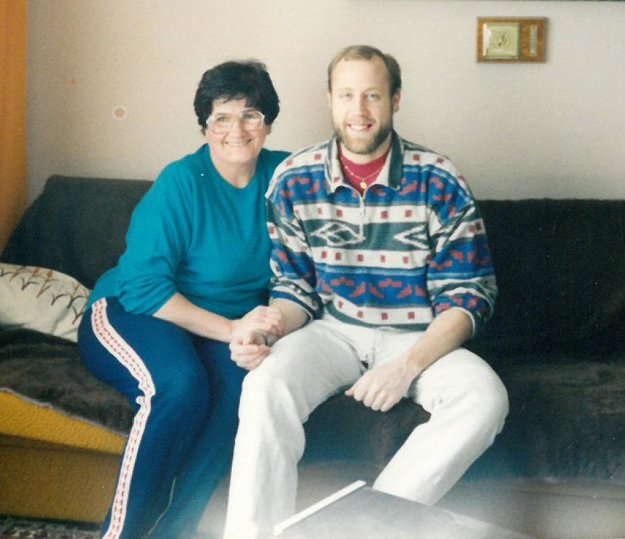 And, so my first evening ended under the roof of the Repašská rodina, my Slovak family, swaddled in love and hospitality, for someone they barely knew.

My first day at Spišské Vlachy’s cirkevná základná škola (elementary school) began with all eyes – children and teachers – fixed on me. I was the lone foreigner, the curiosity who had appeared to teach 6th-8th graders at a Catholic school in this village of 3,500 people.

My first day, the children in each of my classes stood at attention next to their desks when I entered the classroom. I didn’t know how to react. Then, one by one, they marched forward and asked me for my autograph.

If the teachers were similarly awed, they didn’t show it. But they did ask a lot of questions as I learned to properly sip so-called Turecká káva (Turkish coffee) in the narrow room that functioned as the teachers’ lounge. Politics. Race relations. Popular culture. Sports.

The regular faculty meetings were convivial affairs, less about school business than opportunities to celebrate birthdays, meniny (name days), milestones or to swap gossip, in school or heard around town. Frequently, we sang: Spiš dialect tunes, such as “Hej Macejko” or, on birthdays, a song that I think was a fusion of Spiš and Russian, “Živio, živio, živio … mnoga leta, mnoga leta...”

In the evenings, I taught two adult classes, one for beginners and one for “advanced” speakers. One student in my advanced class, Ondrej Záhorňadský, regularly invited me to join him for čapované pivo (draft beer) at one of several local krčmy, a ploy, I knew, to squeeze me for extra English-language practice. Naturally, I was thrilled to oblige him.

Ondrej was from Margecany, a village just down the train line, on the way to Košice. One time, when I visited him in his hometown, he told me a secret: The public phone at the train station was broken, and you could make calls for free. I dialed the United States, and the call sailed through. I couldn’t believe my luck: I had found the Magic Phone of Margecany. For a few weeks, the orange phone at the train station was my new best friend, a lifeline for my homesick soul to reach out and touch family and friends far away.

Another lifeline came from a Repašský son, Pavol, and his wife, Klaudia, who lived next door. They frequently came over for dinner, and Klaudia would patiently suture my butchered Slovak, while her young daughters would play games with me that further aided my learning the language. When I felt particularly unmoored, they’d invite me over to their home, and I would vegetate watching cartoons in English.

Two of the Repašský brothers, Pavol and Marián, were outdoors enthusiasts, and one of their passions was rock climbing. So, barely a week after I had arrived, Pavol invited me to do some climbing at a nearby outcrop called Dreveník. I had no idea what I was in for, but I did know one thing: I had a healthy fear of heights. So, here I was on an early fall morning, getting roped in and staring straight up a 70-foot stone face, with Pavol beckoning me to get moving. Fear swallowed, I began my ascent. Many dodgy steps later, I reached the top, and boy, what a view! Spišský hrad (Spiš Castle) toward one horizon, the foothills to the Tatry at another, and gently rolling, green hills all around. Thank you, Pavol.

Perhaps that steeled my confidence enough to climb another rock face – Gerlachovský štít (peak), the mother of all Tatry – the next summer, with my good pal from Bardejov, Robbie Morrison. But that’s another story.

What is a story for now is one of the unique cultural rites of passage that I was able to witness, the zabíjačka. This came about thanks to a fellow teacher, Ján Furman, who was one of the few younger teachers (and males) at the school. So, on a raw morning in February, I disembarked from perhaps the most ordinary train I had ridden, in darkness, squinting for signs of his hamlet as the pencil-thin light of the train faded into the pre-dawn.

The zabíjačka was truly an occasion I will never forget. Yes, it is a pig killing. Yes, it is bloody, brutal, gory. I have the pictures to prove it. But, no, it is not wanton, it is not cruel, and it is not gratuitous, at least in my book. That pig had been bred, cared for, nurtured, to be Ján’s family’s meat supply for the year. They had raised it with attention and treated it with respect.

I witnessed (and took part in, as I was one of four people involved) the whole affair, from the pistol that shot a steel bolt to the pig’s forehead to stun it, to the shaving of the hair, to the cutting of the body parts, to the threading of the entrails for sausage. We worked hard, and we worked solemnly, for hours, until, when it was well into evening, and we had finished, we paid our respects with a formal dinner that included some of the tastiest parts of the animal.

Experiences during that year – memories gained from that year – are seared in my memory, nostalgic fragments that, together, create a richly illustrative mosaic in my mind.

I lived four more years in Slovakia – a transcendent time that revolved largely around co-founding The Slovak Spectator. Sometimes, I wonder whether I would’ve left Slovakia after that first year, like nearly everyone else in that teaching programme, and missed that once-in-a-lifetime opportunity with the Spectator – if it hadn’t been for Spišské Vlachy, for the Repašskýs, for the Spiš region that I briefly called home.

The last time I visited Slovakia was in 2005, for the 10th anniversary of the Spectator’s beginning. I tacked on a few extra days to that trip, and ever the prodigal son, made my way east, to Spišské Vlachy. The visit was fulfilling, but too brief.

Pani Repašská dropped me off at the train station. With her fingers, she etched a sign of the cross on my forehead. “Môj zlatý,” she said, “this will always be home for you.”

Richard Lewis is a co-founder and former editor-in-chief of The Slovak Spectator.