SLOVAKIA and the Czech Republic are against any implementation of mandatory quotas for migrants redistribution in EU member states, the respective prime ministers Robert Fico and Bohuslav Sobotka jointly announced at a session of the two governments in Valtice in the Czech Republic on May 12. 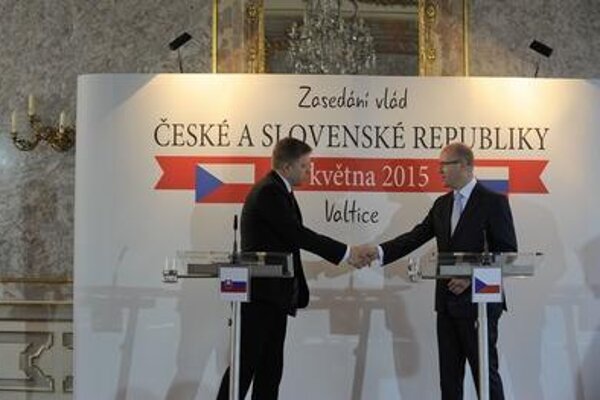 “I refuse to accept any quota policy, in principle,” Fico said, as quoted by the TASR newswire. “Political conclusions from the European Council are in place, which have an unambiguous voluntary element.”

Fico added that if there is a need for discussion on migrants in the Slovak Parliament, he will delegate the interior and foreign ministers to submit a status document to Parliament about what the Government will say on this issue.

During the session Sobotka stated that if Slovakia decides to use Swedish Gripen fighter aircraft, the Czechs will offer its maintenance and training capabilities. He responded to the fact that Slovakia is set to begin official talks on the rental of Gripen jet fighters from Sweden, with the Slovak government assigning the task to Defence Minister Martin Glváč at its regular session on March 18.

While meeting on the sidelines of the session, Fico and Sobotka also discussed alternative routes for gas supplies to the two countries.

“We realise the significance of north-south connections for the Czech Republic and Slovakia alike,” said Fico, as quoted by TASR. “I updated Mr Sobotka on the significant Eastring project, which could pose an alternative for Slovakia if [Russian gas giant] Gazprom’s statement that Ukraine should lose the status of a gas transit country by 2018 or 2019 materialises.”

Officials of the Slovak Economy Ministries and the Czech Industry Ministry and representatives of companies involved should meet soon to discuss further joint measures in light of the statement, said Fico, noting that highway and waterway connections were also discussed.