POPO, the wire-haired dachshund had both bad and good luck in his first five years of life. One year ago, he jumped from a sofa, hitting hard against the edge of a table. 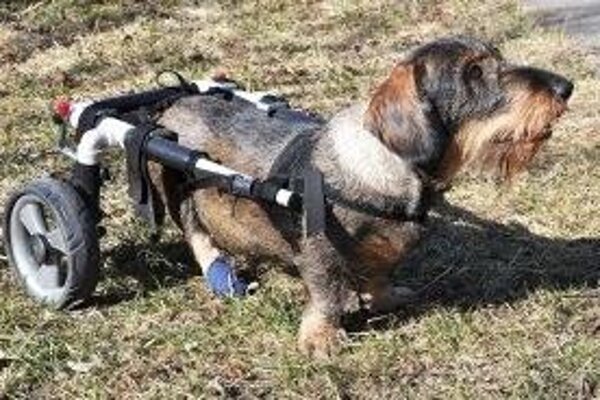 Nobody could foresee that this seemingly banal injury would have grave consequences. In a few days, Popo’s life was in danger, the Sme daily wrote.

“The next day, he started to shake and had uncontrollable movements,” the dog’s owner Ivana Božoňová said. She decided to see a vet who diagnosed a displaced disc which put pressure on the spinal cord. The vet recommended surgery – and then, Popo’s good spree began.

His owners went to Brno, paid €600 for the surgery – still without any guarantee of the result – being told that without the surgery, the dachshund would die.

However, Popo is partially lame also after the surgery: “I train with him every hour, ten times a day,” his owner said. “He does not want to; I have to force him. He is wily – he likes me to tend to him and nurse him but when he sees a female, he runs so quickly that I cannot chase him.”

Popo has assistance in the form of a tailor-made wheelchair where his hind can rest so that his paws touch the ground. Doctors said that the contact with ground stimulates his reflexes and can help train his spine for walking. “A dog allegedly does not have to have brain and back part connected through spinal cord to be able to have a reflexive walk,” Božoňová told Sme.

Her family wants to use the help of a specialized clinic in Prešov where Popo will be treated by rehab experts. “He has sensation in his paws because when I tickle him, he reacts and moves them,” dog owner says. “In the beginning of a walk, he is able to walk for five to ten minutes; then he gets tired and lets his legs hang. But we are happy also with the small progress. We do not give up, we fight.”