PRIME Minister Robert Fico along with Deputy Prime Minister Ľubomír Vážny and 13 ministers of the cabinet have arrived at a decision not to answer questions raised by Denník N in protest against cartoons caricaturing Fico. 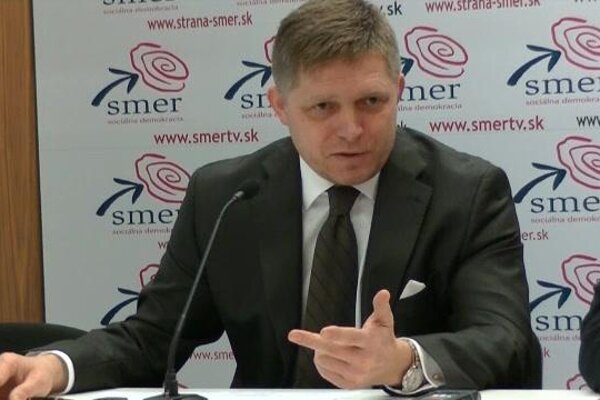 “The reason is long-term biased informing about the work of cabinet which culminated in launch of political stickers anti-campaign,” reads the government statement.

The decision to ignore Denník N came from the cabinet after on May 6 the daily published an appendix of stickers with cartoons by Martin “Shooty” Šútovec depicting Fico. One of them shows Fico with a package of money as a burglar shouting “Catch the burglar!” while another one depicts Fico with his head as a letter box with the slogan “I obtained money with my own head”.

Such behaviour is violation of press law which says that government bodies are obliged to provide information to media about their activities and treat with all media as equal. Each minister and spokesperson should reconsider whether they are willing to participate on such unlawful approach, according to Lukáš Fila, director of the daily’s publishing house N Press.

“This measure will certainly not discourage us from honest controlling of government and ministry activities,” Fila told the media news portal Medialne.sk.

The International Press Institute (IPI) in its press release called on Fico to reverse a cabinet-wide decision on May 13.

“Governments should never be in the business of deciding which media outlets should or shouldn’t be allowed to cover them,” IPI Director of Advocacy and Communications Steven M. Ellis told the press. “And critical coverage, while unpleasant for officials to endure, is often vital to accountability and the ability to make informed decisions – two things essential to a healthy democracy.”

From Fico to government

The Cabinet’s Office responded to the stickers last week when it cancelled accreditation of two of Denník N’s reporters who were to fly with Fico to Moscow for celebrations of the 70th anniversary of the end of WWII.

“By this activity Denník N joined, in an unprecedented way, opposition political subjects and thus the Slovak Cabinet does not see sense in further communication with it,” the Cabinet’s Office wrote in its stance as cited by the daily Sme.

Matúš Kostolný, editor-in-chief of Denník N, considers the cabinet’s decision to be tragic.

“So far it was only a personal failure of PM Fico, who was afraid of questions of our reporters already for some months,” said Kostolný, adding that he perceives it to be peculiar that the cabinet is dealing with stickers.

Several media pointed out that the situation recalls moments from the 1990s when the then semi-authoritarian regime of Vladimír Mečiar banned communication with the SITA newswire, Sme and priate broadcaster Markíza TV for three months.

It is clear from government’s press release that state bodies will not approach all journalists equally which violates Slovak constitution and press law, lawyer Mark Benedik told the Nový čas tabloid daily.

It is not only the law violation but Fico’s decision is dangerous even for Slovak public, according to Kostolný.

“The decision to not answer is message for readers, listeners and viewers that government does not care about them,” he wrote in his op-ed for Denník N.

Tomáš Czwitkovics, media analyst and editor-in-chief of Medialne.sk considers the decision to select journalists on the basis of their opinion as unethical.

“I hope that media community will express solidarity with Denník N journalists and will ask questions which the government refused to answer,” Sme Editor-in-Chief Beata Balogová said, as quoted by Denník N online version.

Independent MP Daniel Krajcer wants to tackle the cutting all communications with Denník N at a special session of the parliamentary media committee and demand an explanation for the move from Fico, according to the TASR newswire.

Speaking at a joint press conference with representatives of the SKOK, Freedom and Solidarity (SaS) and the Ordinary People and Independent Personalities (OĽaNO) parties, Krajcer said that he views the government’s decision as “outrageous, illegal and impertinent”.

The MP, who was formerly with SaS and is now a member of the extra-parliamentary SKOK, added that his party has had a legal analysis drafted by experts that indicates that the Government has violated the law by its decision.

“The analysis indicates that the government’s decision violates the constitutional right to exercise freedom of speech as well as the right to information,” Krajcer said, as quoted by TASR. “At the same time, this conduct is at odds with the ban on discrimination.”

When approached by the Sme daily even some Czech ministers backed Denník N during session of the Czech and Slovak governments in Valtice in the Czech Republic on May 12.

“There should be communication in any situation,” Czech Transport Minister Dan Ťok said, as quoted by Sme. “Journalists are here to do their job and it is not proper to ostracize a daily.”

On the other hand, Czwitkovics said his stance regarding the cartoons’ campaign is reserved, as he thinks that the campaign exceeds ethical journalistic standards of an independent media.

“The sticker campaign of Denník N left the area of ethics in journalism and pointed on the biggest weakness of this otherwise strong media team,” Czwitkovics said, as quoted by Omediach.com journalist ethic watchdog website. “They sometimes consider themselves as independent rock stars who can do everything they want to.”

Cartoons were published on Denník N website before they made it on stickers. The government was quiet then because pictures were cartoons and were depicting what the government does in funny way, according to Kostolný.

“The question is what anti-campaign and what opposition [Fico is talking about],” Kostolný wrote. “What is the difference between cartoons and cartoons on stickers?”

The bright side of the case for the daily is that it drew attention to the daily increasing its number of orders and online visitors. There will be also distribution of more stickers as there is high demand for them, Omediach.com wrote.

“Next week we will repeat the inserting stickers to newspapers,” Fila told Omediach.com. “The date and exact form of stickers is a subject of discussion. The decision is a response to the increased demand for them.”