On eve of IPO, Deutsche Telekom steps in with offer for 49 percent stake. 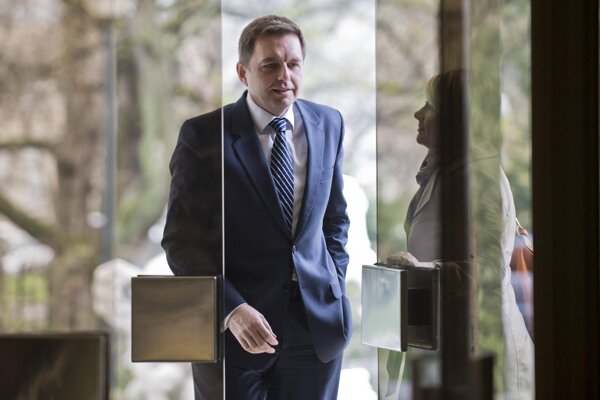 JUST few days before shares of the telecom company Slovak Telekom (ST) will be listed on the stock exchange, Prime Minister Robert Fico's cabinet gave priority to a bid submitted by the ST’s majority owner, Deutsche Telekom. While the government contends it will likely mean bigger profits for the state, the opposition is criticising the move for a lack of transparency.

Finance Minister Peter Kažimír, who temporarily also holds the post of economy minister, confirmed on May 13 that the Slovak cabinet has been holding talks about the sale of the state’s 49-percent stake in ST to Deutsche Telekom. The cabinet cancelled an initial public offering (IPO) for the stake on May 7 after it got an offer from, at that time undisclosed, strategic investor.

“More is more,” Kažimír said as cited by the Trend weekly, stressing the economic benefit of the deal.

The cabinet has not disclosed yet the exact sum Deutsche Telekom offers for the minority stake, but the information circulating among managers of local telecom companies outs that the bid may be between €900 million and €1 billion, the Sme daily wrote.

“The offer is fundamentally higher compared to price generated by the stock exchange,” Kažimír said. He estimates that the deal might be clinched within a week.

Deutsche Telekom refused to comment either on the bid or its sum.

The Fico cabinet’s plan was to get between €750 million and €1 billion for the 49-percent stake Slovakia holds in the telecom operator. The main reason for such step was that the country is not collecting dividends from ST and that as a minority shareholder it cannot sufficiently use its shareholder rights. The cabinet also does not see a reason for keeping the stock amid current upheaval in the telecommunications market, as reported by the SITA newswire.

The selling process began after year-long preparations including changing the country’s legislation to enable an initial public offering of ST’s shares. Back in February, the government decided that the sell-off of the state-owned stake in the company would be carried out via a so-called dual-track process which combines IPO with a direct sale. The plan was to offer the shares on two stock exchanges - on the Slovak one and on the London Stock Exchange. Within this also the Slovak public should have get a chance to buy the shares.

The Slovak government allocated 10 percent of shares to be bought by ordinary people with individuals able to buy up to 423 shares with a 5-percent discount. The starting price for small investors was set at €23.60.

A total of 2,500 people ordered the ST shares via the Slovenská Sporiteľňa bank. After the IPO was cancelled it announced that it will return all so-far paid money and that the cancelled transaction would mean no costs for the potential investors.

The stock market generated the price of ST shares of €17.70, which means at the bottom line of the preliminary price range of €17.7-23.6 per share set in the IPO, the 49 percent stake would generate €750 million.

The decision not to sell the state’s shares of ST via the stock exchange, what was described also by the cabinet as the most transparent way, has raised criticism of the opposition seeing it as not transparent and also missing the chance to try to generate an even higher bid.

“The way in which Robert Fico’s cabinet has prepared the privatisation of Slovak Telekom is not only non-transparent, but it’s also disadvantageous for Slovakia,” said Martin Chren from the opposition Skok party as cited by the TASR newswire.

Chren pointed out to the good condition of ST when it has zero debt and roughly €650 million on its accounts while Slovakia as the 49-percent shareholder has the right for half of this sum but Deutsche Telekom as the shareholder has never let Slovakia to this money, SITA wrote. He added that based on the annual report, ST lent its German mother €150 million at the interest rate of only 0.18 percent.

FNM spokeswoman Mirim Žiaková recalled that it was the privatisation of ST in 2000 during Prime Minister Mikuláš Dzurinda’s term has enabled the behaviour of Deutsche Telekom as the majority ST shareholder and its dividend policy, TASR wrote.

The opposition deputies and market watchers further claim that the government failed to look for strategic investors within the dual-track when it focused only on IPO. As a consequence even though the bid of Deutsche Telekom exceeded proceeds to be generated via stock market, it is not known whether a buyer coming from a transparent tender would not offer more.

“The government is taking upon it the risk that the state would come off a loser while it meanwhile does not explain why it has decided to take up this risk,” said Gabriel Šípoš from Transparency International Slovensko as cited by Sme.

According to Chren, there were some potential investors, but Slovak Telekom did not enable them to look into their books.

Based on the privatisation contract from 2000, Deutsche Telekom holds a preemptive right for acquisition of the 49-percent stake, what means that in case an investor offers more, the German company would have the chance to increase their bid.

Ľuboš Vančo, partner of consultancy company KPMG in Slovakia, confirmed that under the dual-track proceeding the government had to enable also other interested parties to get acquainted with conditions of Slovak Telekom in order they can submit bids too.

“Apparently they focused especially on the sale of shares via the stock exchange; the decision about the direct sale arrived unexpectedly,” Vančo told Sme. In spite of this he thinks that €900 million-€1 billion, which Germans allegedly offered for the Slovakia’s 49-percent stake is a fair offer.