Levoča altar has been reconstructed to full splendour

MASTER Pavol was a world-renowned sculptor and carver; his altar in Levoča, the tallest Gothic altar in the world, has been reconstructed after almost three years of work. 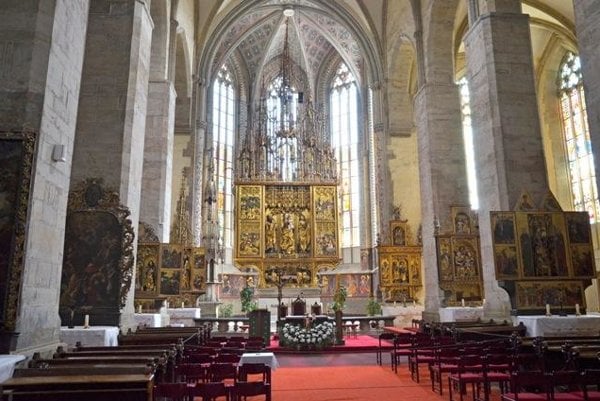 Its original appearance is restored and is on display for locals and tourists in the St James’ Church, with a special festive mass slated for June 6, 15:00.

The reconstruction/renovation started in autumn 2012 and had several phases, with both architecture and statues being restored. In some phases, people were able to follow the works directly in the church. The predella (the platform or step on which an altar stands) was renovated in studios, though. All the works surrounding the altar, from research and documentation to final touches, cost almost €300,000 and were finished just after Easter. 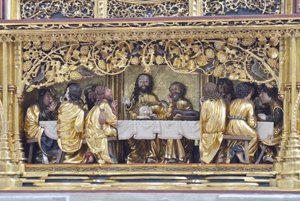 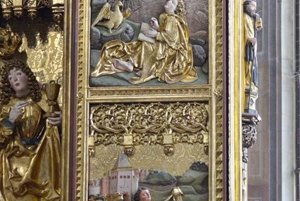 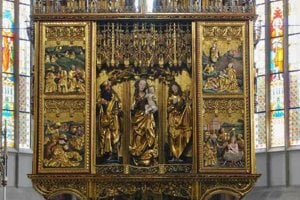 “Renovating the work of Master Pavol (of Levoča) is undoubtedly one of the most important tasks of our restorers’ team,” head of the Regional Restoration Studio, Ivan Tkáč, told the Sme daily. “It is the tallest Gothic altar in the world, dating back to the 16th century which is among the crucial Gothic monuments globally. One has to realise that Master Pavol belongs among the most respected woodcarvers of his times.”

The expert work involved classical technologies with the use of precious metals, powder and plated gold and silver. Currently, restorers are working on the final documentation which will include several thousand pages. The architecture of the altar extension was financed by the Roman-Catholic Parish Office in Levoča, while the German foundation Messerschmidt Stiftung contributed with almost €220,000 for other works.

The restorer in charge, Juraj Maták, said that a restorer has to perceive each work with the same respect and serious concern, for all monuments; but he added that the main altar of Levoča is “a cherry on the cake” and a dream come true.

However, there are some people who are not so happy about it and who expressed their fears already last June. In a letter to the Messerschmidt Stiftung, the Chamber of Restorers expressed doubts about the quality of the work – as on the altar, a group of assistant restorers worked who are only secondary school graduates, although led by Maták – who is responsible for the altar decoration – and Rudolf Boroš who is responsible for panel paintings.

Jozef Lenhart, who works at the Culture Ministry as general manager for cultural heritage, shares these doubts, as well as the reservation that there was no tender before the project started. He adds, however, that it is hard to evaluate the work of restorers in Levoča until scrutinised thoroughly, and that restoration work has become a sought-after field of business, with the Levoča altar being a top attraction both because of the exclusivity and high-profile and because of the finances involved.

Members of the Chamber of Restorers get their direct orders also without public tender, Lenhart adds, and though officially they are all top-level experts, in fact assistants with just secondary education can work on their orders, too, making their cases as non-transparent as the Levoča one.

“Let us admit that all orders for restoration works – including those made by Chamber of Restorers members – are assigned through direct commissioning,” he told Sme, “and nobody points to that. Once a year, restorers get dozens of millions of euros through the grant programme “Let us renew Our Home”. The duty to announce tenders has been bypassed successfully for years by all parties involved,” Lenhart concludes.

One of the conditions of the Messerschmidt Stiftung was also an accompanying book about the restoration as well as about 30 out of the total of 40 Gothic altars that can be found in Spiš – i.e. in the region surrounding Levoča. It will be launched during the June 6 festivities. 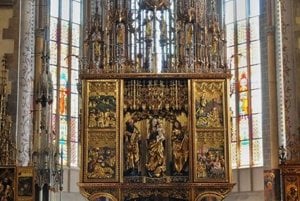 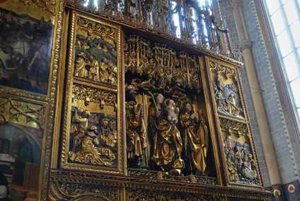 Levoča strives to make itself more attractive for tourists who usually just hurry across the main square, without staying overnight in local hotels. The town also wants to draw inspiration from Lourdes; the town with which they recently signed an agreement on cooperation.

The centre of Levoča is on the UNESCO World Cultural Heritage list, thanks to its tallest preserved Gothic altar, 18.62 metres tall, and almost completely preserved system of town walls, with six bastions out of the originally 15 preserved. Moreover, it has one of the biggest medieval squares in rectangular form, and 60 burgher houses dating back to the 14th and 15th centuries; as well as the Renaissance town-hall, Evangelical Church, and the Marian Hill with the Church of Visitation of the Virgin Mary.

The renovated gem, the unique Gothic altar, should stay intact and without need of further restoration for half, if not an entire century to come.