SLOVAK women earn 20 percent less than men on average, a statistic that is worse than the European Union average, and part of a global trend that Pope Francis recently called a “pure scandal”. 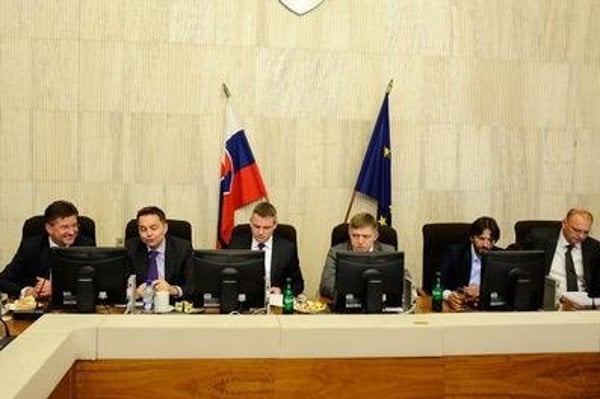 There is no woman in the current Slovak cabinet. (Source: SITA)
Font size:A-|A+  Comments disabled

“The difference in pay between men and women is closely linked to the gender segregation on the labour market and participation of women in public and business life,” Anna Klimáčková, member of the executive board of Women Platform Slovakia, told the Slovak Spectator. “It is a long-term problem that affects all of Europe.”

Based on Eurostat data from 2013, women in Slovakia earn 19.8 percent less than men. It is more than the European average of 16.4 percent, but less than in Estonia, which has the EU’s biggest gap — 29.9 percent. Among neighbouring countries, Austria and Czech Republic are worse than Slovakia with 23 percent and 22.1 percent, respectively. Hungarian women earn 18.4 percent less. The greatest equality was reported in Slovenia (3.2 percent), Malta (5.1 percent) and Poland (6.4 percent).

Slovakia is still lagging behind in gender equality, mainly in comparison to western Europe. Luboš Sirota, CEO and board chairman of HR consultancy McROY, attributes it to traditional gender stereotypes, reinforced during the previous regime.

“Women have been associated with the role of child carers and this outlook persisted during socialism,” Sirota told The Slovak Spectator. “The state required full employment but accepted the position of women as in the household, which strengthened the gender roles.”

Historical gender stereotypes associated men with the dominant position, which was also reflected in earning potential. The Gender Pay Gap (GPG) represents the difference in the average hourly wage of men and women, expressed as percentage.

“Since long ago, women in Slovakia have been earning less than men, regardless of overall comparison or even with identical positions,” said Sirota.

According to Sirota, cultural stereotypes can later affect the choice of secondary education and determine the person’s professional development.

“Although some jobs are based on the physical predispositions of the men; these stereotypes should not cause that we consider each driver or builder to be a man,” said Sirota.

Nevertheless, it is a common practice that females prefer business colleges whereas males go for technical colleges. The situation is similar with universities. Results of a survey by the Slovak arm of Sberbank indicate that women are more educated but earn less. Amongst the young generation between 25 and 34 years, survey reported that 36 percent of women had a university education but only 24 percent of men.

“The highest pay differences, 31.5 percent, were reported in the 35-39 age category, which points to the efforts of young mothers to take up any work in order to have an income,” Klimáčková confirmed.

When compared with neighbouring countries, the situation in Poland is better because Slovak industry is dominated by the automobile industry which is not the first choice for women. Moreover, with a population of nearly 40 million, the job market offers more variety. Women enjoy better wage conditions, keeping 100 percent of their pay during the first 24 weeks of maternity leave, compared to 60 percent in Slovakia, with a cap also set by law.

“Apart from that, Poland belongs amongst the top countries with women in managerial positions,” Klimáčková pointed out.

“There is still a low number of women entrepreneurs,” said Ivana Vačoková from the personal agency Adecco. “The traditional perception that a woman is a mother comes first, the role of an employee comes just second.”

The situation is better in international companies and the non-manufacturing sector, but still there is room for improvement.

“Many times, women aren’t hired because the employer is afraid that they will leave for maternity leave,” said Vačoková. “This, together with the problematic return from maternity leave, results in higher unemployment rates among women. Maternity leave can slow down women’s progress towards the top management. On the other hand, women who prefer work are often perceived as careerists and viewed negatively.”

What is being done

The gender pay gap has been on the agenda of the EU for a long time. Five years ago, in 2010, Brussels came up with the Women’s Charter that proposes solutions and describes the measures supporting gender equality in social politics.

On April 11, the German daily Die Welt wrote that the current economic order and open market helps push equality. It forces women to enter the labour market in order to help the family to meet the basic needs. As evidence they list the Scandinavian countries with the highest tax expenses that usually have the highest rate of employment amongst women.

Although there have been efforts to improve the situation in Slovakia, none of the initiatives have developed into a systematic policy. Significant changes have been made only since 2013, under pressure from the EU. Two controls found 44 cases of payment discrimination of women, which encouraged more women to actively engage in their rights.

“In 2014, government passed the gender equality strategy which includes the measures towards solving the most serious problems,” Klimáčková said. “Slovakia is amongst the signatories of the Convention to Eliminate All Forms of Discrimination Against Women and optional protocol from 1999, which binds us towards meeting the international agreements.”

“The role would be to communicate with government, parliament, private and non-profit sectors,” Klimáčková specified.

The government has promised to invest in pre-school facilities and motivate employers to take on mothers with small children. Improving the system of education would help the problem. The parents must postpone their return to work due to low capacity of kindergartens and inconvenient opening times.

“They aren’t customized to the new trends on the labour market when the parents leave work between 17:00-18:00,” said Vačoková.

A larger number of part-time or flexible contracts would also help women to get back to work after maternity leave.

“Return to work after maternity leave was amended by the labour code,” confirmed Molnárová from Amrop. “It guarantees a woman not only the original working conditions negotiated before the maternity leave but also further improvements she is entitled to.

Regardless of the legislation, jobs are created by companies, not government. Therefore the gender equality must be solved elsewhere.

“The measures are restricted only to supporting pro-gender measures at the employers and better coordination of professional and private lives,” said Sirota. “But it isn’t enough.”

The Labour, Social Affairs and Family Ministry’s gender equality department has already launched a project called Family and Work that is part of the long term objective of the EU operational programme Employment and Social Inclusion. It targets the women and small children, who are the most underprivileged groups on the labour market. In particular, it tries to provide flexible employment for the women who are at home with small children.

“The situation has improved; many companies experienced larger numbers of women at the top positions, as well as proportional remuneration of the employees of the same level,” said Vačoková.

She attributes it to the foreign companies that inspired also the Slovak ones. Ten years ago, women held only about 10 percent of the positions in the top management, nowadays it is around 25 percent, confirmed Sirota.