THOUGH three weeks have passed since the devastating earthquake in Nepal, the government is still struggling to transport six tons of humanitarian aid to the stricken country because Slovak airplanes are not able to land there. 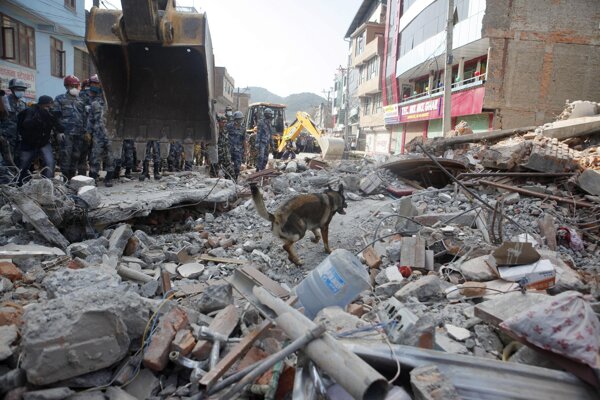 “Help through a Slovak humanitarian organisation would be better alternative,” Človek v ohrození (People in Peril) spokeswoman Eva Sládková told The Slovak Spectator. “The help would be delivered equally correctly because our organisation had people in the field in Nepal two days after earthquake.”

The earthquake of magnitude 7.8 on the Richter scale that struck Nepal on April 25 was the strongest in 81 years, causing more than 5,000 confirmed deaths and widespread damage, with houses and ancient temples collapsing. The dysfunctional airport in Kathmandu has caused a logjam of tourists eager to fly home. Later another 7.3 magnitude earthquake struck Nepal on May 12 claiming more than 100 lives.

In two days after the first earthquake the Foreign Minister Miroslav Lajčák decided to send €30,000 to humanitarian organisation World Vision International helping people in Nepal. Later, the government agreed on humanitarian aid with a sum of more than €70,000 on April 29.

Among other things, State Material Reserves decided to send blankets worth €836 and water containers for €1,487 and the Health Ministry should provide surgical material valued at €30,000. Also 20-members team of rescue workers from the central emergency service in Gabčíkovo hydropower plant is prepared to help.

Slovaks has donated around €60,000 so far, public service Slovak Radio reported on May 17.

The aid however is still at Bratislava airport because the affiliated air plane is not able to land in the Nepalese capital Kathmandu. The capital is at too high an altitude and Slovak pilots lack experience with landing in such altitudes. Moreover, the airport does not have sufficiently long landing runaway for state-owned TU-154M airplanes, Interior Minister Robert Kaliňák said in April.

Pilots of Interior Ministry are highly skilled professionals because they should be able to land in various airports instead of repeating landings on same airports as pilots of commercial lines do. The problem is that state’s airplane is too heavy and if pilots want to land on shorter runaway they have to train on simulator, ministry spokesman Ivan Netík said.

“The reason is older navigation equipment in TU-154M airplane and hilly terrain which deforms information which pilot have to consider when doing landing manoeuvre,” Netík told The Slovak Spectator. “The navigation from the ground is needed as well. Modern airplanes do not have such problems.”

Slovakia’s Foreign and European Affairs Ministry has obtained provisional consent from the Czech government to carry the aid on board of its special government aircraft, but the Foreign Ministry is still seeking other alternatives.

“It depends on several factors; predominantly on whether the transport capacity of the [Czech] aircraft is available,” ministry spokesman Peter Susko told The Slovak Spectator.

The Czech Republic has a team of paramedics in Nepal and the airplane was scheduled to send there another rotation of them together with supplies on May 15.

“This is an ideal opportunity for the special plane to transport the Slovak humanitarian aid to Nepal,” said Tomáš Kára of the Czech Foreign Ministry's press department.

However it turned out that Czech airplane is able to carry only material for Czech paramedic team together with supplies of Czech Red Cross organisation. The Slovak Interior Ministry expects that Czech airplane will deliver Slovak aid during its next flight to Nepal scheduled for May 31, according to Susko.

The Interior Mininstry does not plan to modernise its air forces to be prepared even for such situations.

“Considering the fact that no political agreement on purchase of more modern machines has been reached the Interior Ministry has stopped modernisation of its forces for now,” Netík said.

Besides being slow with transporting of humanitarian aid the government faces criticism from Slovak humanitarian organisations saying they are discriminated when state is deciding about the help for foreign countries dealing with catastrophes.

For example, Slovak humanitarian organisation Magna has its team in Nepal securing health and psychological care for survivors. The organisation has people from Slovakia and India able to anytime travel to problematic parts of the world. For example, Magna was helping people dealing with earthquake in Haiti, famine in Northeast Africa, cyclone in the Philippines and so on, according Operations Director Denisa Augustinová

However, instead of preferring domestic humanitarian organisations such as People in Peril or Magna, the Foreign Ministry sent €30,000 financial aid to World Vision International because it operates in Nepal for a longer time and created proper infrastructure there, Susko said. Its workers are placed around the Nepal including Lamjung city which was closest to earthquake epicentre and financial aid from state would be useful.

“We discussed our decision on international level using our Permanent Mission to the United Nations Office at Geneva,” Susko said. “Decisive factors are experience and infrastructure on the place which aforementioned organisation has in Nepal.”

Slovakia lacks the unified system for choosing and organisation which will receive state’s aid for helping in foreign countries. The state sometimes helps via well-known international organizations such as UN and sometime via Slovak organization or foreign private humanitarian organization, for example, WVI, according to Augustinová.

“We think that it would be better if they supported active Slovak humanitarian organisations,” Augustinová told The Slovak Spectator.

People in Peril advocates changes to legislation in such way that it would be able to provide instant financial aid even to Slovak organisations. Under current rules, the state has to organise a public competition and organisations have to go through selection procedure which is not possible during catastrophes, Sládková said, adding that it is hot topic because law on development aid will be soon amended.

“Slovak non-governmental organisation are discriminated against,” Sládková said. “In past it was possible to provide financial aid to Slovak organisations in such cases but currently it is not possible.”

Susko responded that draft of the amendment already deals with this problem.