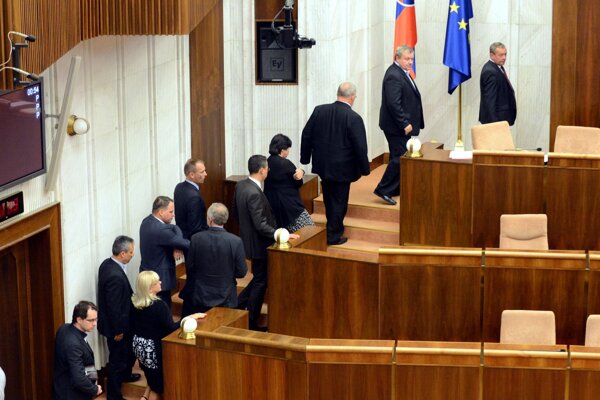 Secret voting of the new NKÚ head in parliament on May 20. (Source: TASR )
Font size:A-|A+0

Karol Mitrík received the votes of 82 out of the 142 present MPs in the secret election which took place on May 20, and which was preceded by a seven-hour-long debate in the parliament on the day before, lasting until late evening.

Mitrík, who served as the head of the SIS secret service under the government of Mikuláš Dzurinda Iveta Radičová, was proposed by SDKÚ chair Pavol Frešo. He was perceived as a candidate suitable to the ruling Smer, because back in 2013, when the opposition couldn’t come up with a candidate, Fico proposed three opposition-linked candidates and Mitrík was one of the names on his list. 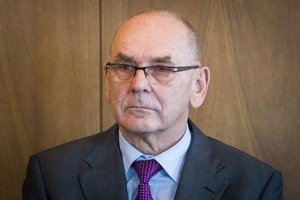 Parliament has been unable to elect the successor for Ján Jasovský, who still heads the office on an interim basis despite his term having officially ended in February 2012. The opposition parties, which traditionally nominate a candidate, had previously failed to meet Prime Minister Robert Fico’s demand for complete unity over the issue, but he dropped the demand shortly before the election date.

Following Fico’s shift in approach, three candidates were proposed for the May 19 election of the next head of NKÚ: Maroš Žilinka, Karol Mitrík, and Henrieta Crkoňová. While Žilinka received 54 votes, Crkoňová only got the support of five MPs. 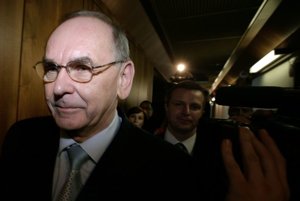 Žilinka, a former deputy interior minister who also ran on the slate of the Christian Democratic Movement (KDH) in the 2012 elections, was supported by 60 MPs. The KDH previously proposed him for the post in May 2013, when he also had the backing of SDKÚ and Most-Híd, then grouped together with KDH in the People’s Platform. The parties, however, withdrew him from the vote after Smer changed the balloting process to a secret vote.

Opposition representatives were not hiding their discontent over the election of Mitrík, suggesting that he is not really an opposition candidate.

​“Smer has elected its own candidate, so the government of the Smer party will be ‘controlled’ by a candidate of Smer,” opposition Most-Hid chairman Béla Bugár wrote in his reaction, adding that Smer “never had a real interest to allow the control of the government and elect an opposition candidate for this post”.

Robert Fico however maintains that Smer had nothing to do with the nomination of Mitrík.

“I do not know of any clearer opposition candidate,” Fico told a press conference at which he reacted to the election of the new NKÚ head. Fico argued that Mitrík is a founder of KDH and SDKÚ, former director of the secret service under the government of Iveta Radičová, and thus “the most opposition candidate”.

Read also: Who is Karol Mitrík

Fico went on criticising opposition for not being able to guarantee 60 votes for one candidate and called the 54 votes that Žilinka received “a big failure”.

Prior to the vote, Frešo, Kvasnička, and Kuffa saw scornful criticism pouring on their head from their fellow opposition MPs for disturbing the opposition’s unity. Observers suggested they might have proposed their candidates in order to oblige to Smer.

“Smer does not have 83 MPs anymore, but 86, and the opposition does not have 67 lawmakers, but three less,” OĽaNO head Igor Matovič said speaking in the parliamentary debate on May 20.

In light of the nominations of more than one candidate, independent MPs Miroslav Beblavý and Martin Fedor, both members of the non-parliamentary Sieť party, withdrew their support for Žilinka although stressing that they still considered him a good candidate, but labeling the election a “tragicomedy”.

Other opposition MPs who signed Žilinka’s candidacy claimed their readiness to support him in the secret election.

Kaník criticised his former party chief Frešo for distrupting the unity of the opposition by proposing Mitrík.

Frešo in his reaction however said he was proud to have proposed “such a good candidate”.

“Karol Mitrík is a head of NKÚ that we all can be proud of,” he said as quoted by the TASR newswire, and reiterated that he proposed Mitrík as an opposition MP, and not on demand from Smer.

The NKÚ is a state office that was established in 1993 in the Constitution as “an independent body in charge of overseeing the management of budgetary resources, state property, property rights and state claims”.

Until now, the NKÚ was headed by Ján Jasovský, who was elected to the post in 2004 as a nominee of the then-opposition and now obsolete Movement for a Democratic Slovakia (HZDS) party. His term expired in February 2012.

Based on an unwritten tradition, which started with Jasovsky’s election, the NKÚ top post should be filled by an opposition candidate.

The term of the NKU head lasts seven years, so that it does not overlap with the term of the government under which it was elected.

Mitrík starts his term officially from May 21.