THE NEW lightweight mobile EVA howitzer is the next step in recovering the armaments industry in Slovakia, said Defence Minister Martin Glváč. 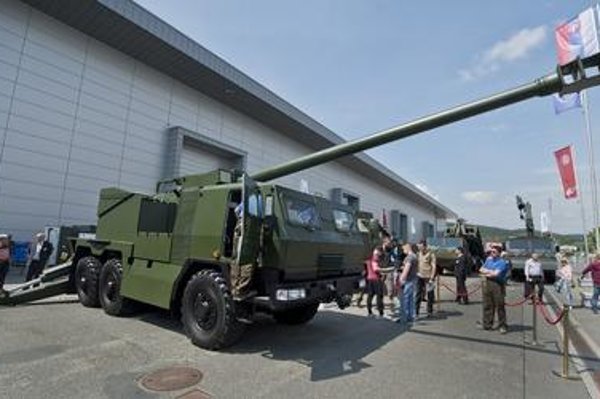 He unveiled the piece at the International Fair of Defence and Security Technology (IDET) in Brno, the Czech Republic, on May 19.

“This is another step to restore our armament industry after a long time,” Glváč said, as quoted by the SITA newswire, adding that he hopes it will become part of the armed forces arsenal after passing tests.

The EVA howitzer is a result of Czech-Slovak cooperation. It features a Czech Tatra truck chassis but the superstructure is made in Slovakia. EVA, which has six-wheel drive, is lighter than the earlier Zuzana eight-wheel drive mobile howitzer and, according to Glváč, will be also more affordable. He added that if the vehicle passes the final tests, the Czech army will also be interested, as reported by the TASR newswire.

It was produced by the Konštrukta – Defence, which belong to the DMD Group based in Dubnica nad Váhom.

“It is again a big sign of recovery of armaments production in Dubnica,” said Viliam Dubovický, chairman of DMD Group, as quoted by TASR. Dubnica plant used to be one of the largest arms producers in former Czechoslovakia.

IDET is being held May 19-21 at the Brno Exhibition Centre. The exhibition is being attended by delegations of armies and defence ministries from several countries, according to the organisers. IDET is held every two years alternating yearly with the International Defence Exhibition Bratislava (IDEB). It is currently the 13th IDET.

Visitors can see it at the Slovak Defence Ministry stand at the exposition. Among the equipment on display is a Zuzana 2 howitzer, military clothing equipment for international crisis management, an Iveco vehicle with a mechanical tower and the DELOSYS Artillery Command & Control System, TASR wrote.