IN THE tourist season, the Slovak capital is frequently visited by tourists, including Austrians, Americans and tourists from Asia alike. But most stay just long enough for a brief guided tour, and coffee break or quick lunch. 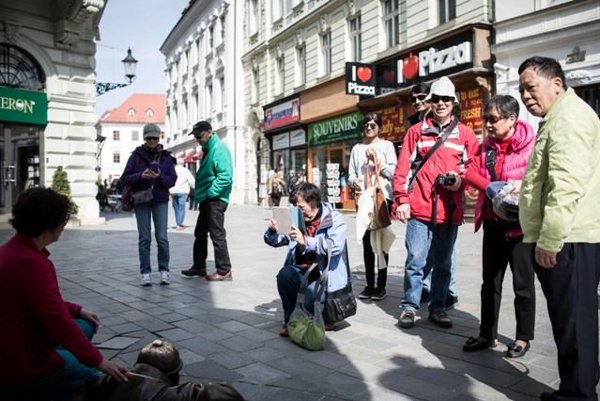 “Americans are usually elderly people with the average around 70 years of age,” Bratislava guide Martin Sloboda tells the Sme daily. “That is the typical age when they start travelling.”

Patricia Gill, who visited one sunny April Saturday, has just turned 90. She is enthused by the European trip, and keeps pace with others –  thanks to a crutch which can be changed into a three-legged impromptu chair. She finds Bratislavans nicer than inhabitants of Vienna where they were the day before (maybe because Friday is a work-day and everyone was busy).

She may like Bratislava better also because of the weather: rain and cold can spoil even a visit to city like Paris. Moreover, “sun can attract to streets also locals, and they co-create the atmosphere”, Sloboda opined.

Sherry Zekowski, another US tourist, also paid a visit.

“The first thing I spotted here was Moods Bakery & Coffee – a very nice chain of cafés,” she says. “And there were young people inside, and a couple in love outside – surely locals.”

She finds the atmosphere in Bratislava fantastic, better than in Vienna and Budapest – she can imagine spending a few weeks here.

“I would know everyone by their names then, no?” she laughs. A superintendant at secondary schools, Zekowski is form New York City and has travelled a lot, save for India. Everywhere she went, she was interested in exploring the education system and the culture. She finds the guided tour of Slovakia the second best thing of the whole European journey, after the Gustav Klimt exhibition in Vienna’s Belvedere. 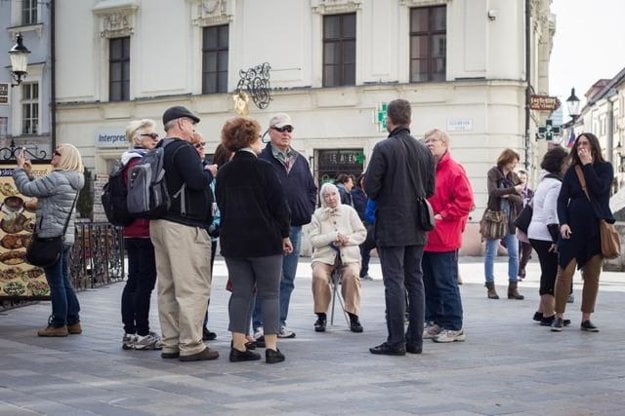 US tourists in Bratislava (Source: Sme)

Nancy Stafford of New York is for the first time in Europe and is fascinated by historical centre, narrow alleys and cafés full of people.

“For Americans, each building older than 100 is historical,” the guide explains.

They also admire the Slovak “savoir vivre”, the ability to stop hurrying and enjoy meal or coffee.

“In the US, they cannot afford to waste time, and after half an hour in a café, the waiter would wave you out, so that you do not take the place of others,” Sloboda explained of his US experiences. He also adds that safety of Bratislava is a big positive point, especially when compared to some neighbourhoods in US cities.

Germans and Austrians require a detailed lecture, interested in joint history – and they are especially in love with the Habsburg rulers, guides say. They like traditions and crafts but have low esteem for Slovakia. They are equally shocked by the busy city life, relatively cutely reconstructed centre and decent standard of living.

Asian tourists, in the other hand, can endure only a brief lecture on Bratislava – as they know nothing about the history and overall, the European trip is usually a culture shock. What they can relate to are usually composers like Beethoven or Mozart, as they are often connoisseurs of classical music.

“They are interested in everything and ask about everything, including salaries, social benefits and money in general,” Marián Belačič, head of the Slovak Association of Tourism Guides told Sme.

He adds that they are mostly surprised by local gastronomy, order various meals and everyone tries everything – while also taking pictures.

“But they usually only poke at bryndzové halušky and return them uneaten – it is an unusual combination for them,” Bilačič says.

He also complains about excessive picture taking that slows down the progress of the group.

“But since selfies were created, it has improved,” Bilačič laughs. “Before, everyone took photos of everyone, in various stylised poses, everywhere.”

Chinese tourists often prefer local Chinese restaurants, but are disappointed by the lack of original ingredients used there – also the rice is low quality, they complain. While they are very disciplined, Thai and Philippine tourists have problems with time management, Bilačič complains. Indian tourists refuse to walk – sometimes even for 500 metres – while they are by far the wealthiest visitors.

All tourists are positively surprised by what they find Bratislava and Slovakia – but this cannot change their itinerary, and so they stay here just for a while anyway, continuing from here to Vienna, Budapest, Prague or Krakow, tourism experts say.

“They have decided already back home about their time schedule, and cannot change it now,” Sloboda says.

In 2014, 844,524 tourists visited Bratislava – 67 percent from abroad. They stayed for 2.17 nights here in average, while Slovaks stayed for 3 nights, the Slovak Statistics Office claims.