SLOVAKIA will never recognise the illegal annexation of Crimea, the country’s president Andrej Kiska said after meeting Ukrainian President Petro Poroshenko during his official visit to Kiev on May 20. 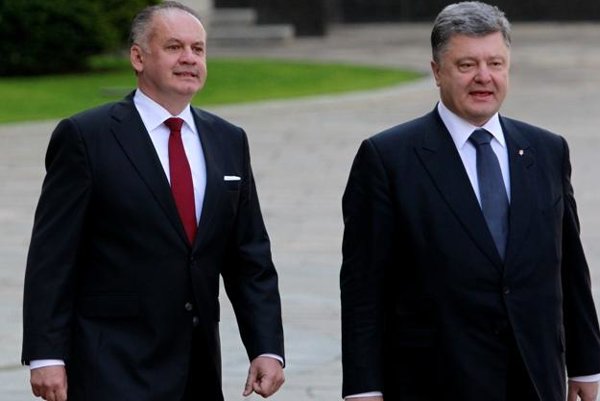 “We mustn’t accept any political, military or economic interference in Ukraine’s sovereignty,” said Kiska as quoted by the TASR newswire.

Things have improved somewhat in eastern Ukraine recently but there is no peace as yet, Kiska said, adding that Slovakia views it as important that the Minsk agreements as a whole should be adhered to. He also highlighted the importance of thorough monitoring of the truce, the impermeability of Ukraine’s eastern border and Kiev’s full control of the territory.

The Slovak head of state also urged the European Union’s united and rigorous approach in this regard, noting that the possible lifting of sanctions on Russia must be inextricably tied to the fulfilment of the Minsk agreements.

Ukraine is set to tread the path of many difficult reforms – of the kind that Slovakia has already been through, according to Kiska. Whilst this is a painful process that often impacts people’s standard of living, they are ultimately needed for the country’s prosperity. “Ukraine will have our support in that,” he added.

Kiska also pledged Slovakia’s support for the EU’s enlargement, adding that if Ukraine is interested in becoming an EU member and meets technical requirements, it has to have a chance of EU membership.

Turning to the liberalisation of the visa regime for Ukrainians, Kiska called this a technical, not political, problem. “I hope it’ll be overcome post-haste and Ukraine will have a visa-free regime with EU countries,” said Kiska. The president confirmed that Slovakia is ready to continue to provide reverse gas supplies to Ukraine which, as he noted, were launched at a critical time.

During his visit to Ukraine, the Slovak president also met Prime Minister Arseniy Yatsenyuk and Speaker of Parliament Volodymyr Groysman, TASR wrote. Kiska also delivered humanitarian aid for citizens from war-torn areas and to the children’s department of the oncology institute in Kiev. While in Kiev, he also layed wreaths at the Tomb of the Unknown Soldier and at the Memorial in Commemoration of the Victims of Famines.

On May 21, Kiska will travel from Kiev to Riga, Latvia’s capital, where he will attend the two-day Eastern Partnership summit. Heads of state and government representatives, including President of the European Council Donald Tusk, will evaluate the progress of the Eastern Partnership countries - Armenia, Azerbaijan, Belarus, Georgia, Moldova and Ukraine, and discuss possibilities for further cooperation.