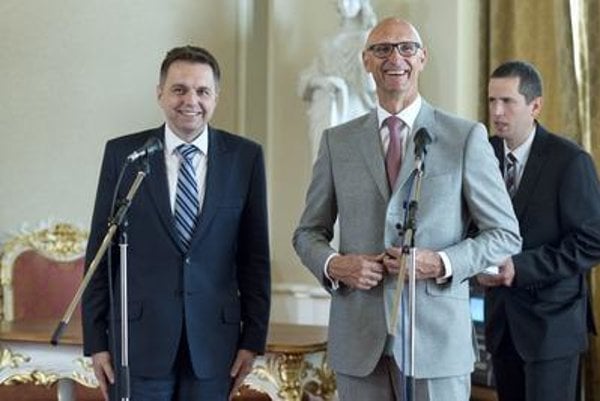 The opposition called the deal as scandalous criticising the Fico government for not holding a tender.

“We’ve completed it,” Finance Minister Peter Kažimír, who also holds the interim post of the economy minister, said after signing the contract on May 19.

Timotheus Höttges, CEO of Deutsche Telekom, said that that the acquisition of 100 percent of Slovak Telekom’s shares is part of the company’s global strategy as it wants to become the leader in providing telecommunications services. Höttges added that Deutsche Telekom has invested more than €500 million in Slovakia since 2010, and it allocated €178 million for infrastructure in Slovakia last year alone.

“We feel at home here, and the acquisition of a 100-percent stake is the logical conclusion of this presence,” said Höttges, who described the price bid as fair and the entire process as “very transparent”, as cited by the TASR newswire.

The country sold its 49-percent share for €900 million while €100 million of this sum will be sent to the special account and will be used for settlement of potential lawsuits ST might face on the basis of its past deeds. This money will be in deposit for eight years.

Both sides also agreed on paying out dividends of €16 million to the state for last year.

The Fico cabinet’s plan was to get between €750 million and €1 billion for the 49-percent stake Slovakia holds in the telecom operator. The main reason for selling the stake was that the country is not collecting dividends from ST and that as a minority shareholder it cannot sufficiently use its shareholder rights. The cabinet also does not see a reason for keeping the stock amid current upheaval in the telecommunications market.

The selling process began after year-long preparations including changing the country’s legislation to enable an initial public offering of ST’s shares. Back in February, the government decided that the sell-off of the state-owned stake in the company would be carried out via a so-called dual-track process which combines IPO with a direct sale. The plan was to offer the shares on two stock exchanges - on the Slovak one and on the London Stock Exchange. Within this also the Slovak public should have get a chance to buy the shares.

The stock market generated the price of ST shares of €17.70, which meant at the bottom line of the preliminary price range of €17.7-23.6 per share in the IPO, the 49 percent stake would generate €750 million.

Just few days before shares of the telecom company Slovak Telekom (ST) were due to be listed on the stock exchange, Fico’s cabinet gave priority to a bid submitted by the ST’s majority owner, Deutsche Telekom.

Representatives of several opposition parties called the deal a scandal, reproaching the cabinet for not holding a tender.

“We’re shocked that the government is privatising state property worth a billion [euros] without a competition, selling it to a single bidder – Deutsche Telekom,” said Juraj Miškov, former economy minister and chairman of the non-parliamentary party SKOK. “Companies were not privatised like this even under [Vladimír] Mečiar (thrice premier in the 1990s).

Miškov added that Iveta Radičová’s government (2010-12), in which he featured as economy minister, wanted to sell the state’s stake in Slovak Telekom on the stock exchange.

“Even Robert Fico’s second government didn’t have to scrap this way of privatisation,” said Miškov. “Nevertheless, the government has now gone so far that it betrayed most Slovak people that wanted to buy Telekom shares on the stock exchange. Nevertheless, the reality now is that Fico’s government has sold the shares without a competition to a single bidder.”

Independent MP Daniel Lipšic (NOVA) believes that the contract is disadvantageous for Slovakia.

“It’s obvious that the price offered by the Germans is lower than it would have been generated by an international competition,” said Lipšic. “Even worse, this €900 million includes €100 million for fines and legal disputes that Slovak Telekom lost. This means that [the cost of] bad managerial decisions made by Slovak Telekom managers will be subtracted from the overall amount.”

Ordinary People (OĽaNO) leader Igor Matovič, believes that the government announced the sale of the shares on the stock exchange in order to put off strategic investors.

“Fico said in advance that the shares would be sold via the stock exchange, whereby he repelled all strategic investors, and in the end he was able to sell them to a bidder selected in advance, far more cheaply than would have been the case in an international competition,” Matovič said.

Kažimír reiterated that the government will use the proceeds from the sale to reduce the public debt.

“I confirm that the money will be used to consolidate public finances,” Kažimír said, as quoted by SITA. “This means the reduction of the general government’s debt.”

While economists recommend to use the proceeds for reduction of the debt, many expect otherwise. It is expected that on May 23 Fico would announce the second social package while the first one has had a price tag of about €250 million.

The Fico cabinet also eyes a share in the dominant electricity producer Slovenské Elektrárne (SE). Italy's Enel is selling its 66 percent stake in SE while the Fico cabinet has already showed interest in the stake.