The attraction of “broken arms”

IN 1914, the First World War began, but for Bratislava the year was important for another reason: the south-German painter Karl Hugo Frech moved in and stayed here until his death in 1945. 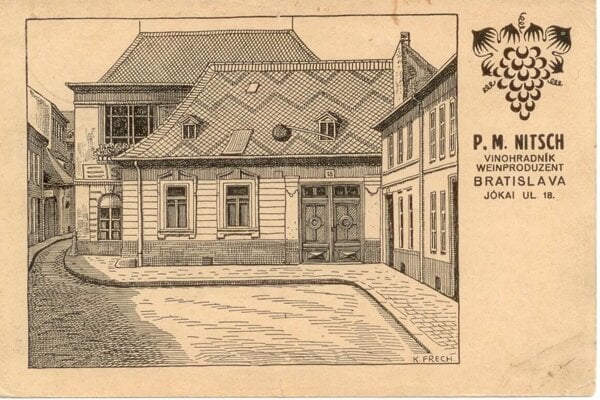 Old Bratislava enchanted the artist. “You have to come as a complete stranger into this old town to see how really beautiful it is,” he said. Numerous graphic artworks, paintings, sketches, and drawings in which he recorded in topographic detail the look of Bratislava attest to his fascination. The sites Frech was able to admire a century ago does not exist anymore, only a portion of the original historical town remains. Thus, painter’s work is of great documentary value.

The street with houses in this 1920s postcard is also a matter of past.

For us, it is interesting that Frech created this painting probably at the order of the family of viticulturists, the Nitsches. They then used it for their promotion, complete with a logo, name and data on their company.

The house No 18, as seen in the middle of this card, was a typical viticulturists’ building. With a closer look, one can see a “viecha” sticking out from the roof window. Viecha was a wreath made usually of oak or wine leaves, some were also from pine branches, and it used to announce to everyone that wine is now drawn at this winemaker family. It was Katarína Nitschová from the house No 18 who first tried to modernise this sign and instead of twigs, lured visitors with lighted electric bulbs.

In the nearby wine-growing municipality of Rača, nobody tried to electrify viechas. Local winemakers used to hang a ball that was made just from conifer branchlets, but it had electrifying effects on passersby nevertheless. It was trickily called “the broken arm” and visitors felt obliged to come visit the poor viecha owner who allegedly had a broken arm. As all winemakers in Rača constantly had “broken arms”, and their cellars were always full of people.