IN RECENT years a number of international companies have established shared business and service centres in Slovakia, creating a new, significant economic that gives jobs to thousands of educated Slovaks. The number is expected to grow further. 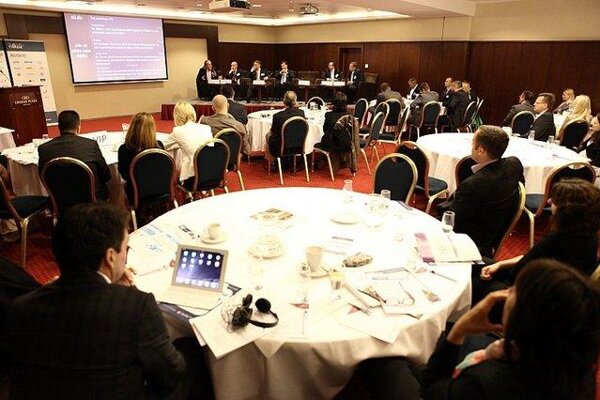 “Centres are created by companies that are already established in Slovakia,” Rastislav Chovanec, state secretary of the Slovak Economy Ministry said at the first conference held by the Business Service Center Forum (BSCF) in mid May in Bratislava. “It is more than sure that their number will increase because Slovakia is moving to projects with higher added value.”

The BSCF, launched at the American Chamber of Commerce in Slovakia (AmCham), organised the conference to raise awareness of this significant sector. Panelists from business, government and academia discussed the conditions for investment in shared services and outsourcing in the CEE region. They also examined various strategically important approaches for increasing Slovakia’s competitiveness and enhancing its position as an attractive investment location in the foreseeable future.

The BSCF clusters 19 centres that are responsible for the execution of specific tasks, for example financing and accounting, IT support, HR and others, supporting the core activity of the company. Companies, that have launched such centres in Slovakia include Dell, Amazon, Siemens, IBM, Accenture, AT&T, Henkel, ING Bank, Swiss Re and T-systems.

In early 2015 AmCham Slovakia surveyed 19 business service centres, reflecting their status quo over 2014. During this period of time they employed 23,243 people, while their headcount increased by 10 percent over that year. On average more women than men work at such centres, while their average age is 31 years and 82 percent of them hold a university degree. Service centres have a lean management structure where only 9 percent of them are foreign nationals.

The majority of the centres are still clustered in Bratislava, but the position of Košice in eastern Slovakia is strengthening as investors are discovering the advantages of other locations.

In the context of central and eastern Europe, Slovakia is noteworthy for having a significant number of large BSCs that employ more than 500 or even more than 1,000 people, according to the survey.

In terms of financial contributions to the Slovakia’s economy and the state budget, in 2014 they paid around €259 million in employee income taxes and social security contributions. Moreover, BSCs pay their employees almost double the Slovak average monthly salary when these salaries have grown annually by 4 percent since 2011. The so-called weighted average monthly salary was €1,660 in 2013.

When answering a question why did a company establish a BSC in Slovakia, the surveyed companies listed availability of highly skilled and flexible workforce, favourable labour and production costs, geographical location and stable political environment. Among external challenges they face they listed, among others, availability of relevant skill set, quality language skills, linkage of university curriculum to practice as well as labour laws.

“Slovakia has gradually been losing competitiveness in terms of having a cheap labour force, which is an asset acquired by other countries,” said Sedgwick as cited by the TASR newswire. “It can be competitive in highly educated labour force, though.”

“If Slovak students will be sufficiently educated for the workplace, then they’ll stand a greater chance of getting a job at home,”  he continued.

Romana Kanovská, state secretary of the Ministry of Education, Science, Research and Sports, pointed out that Slovak schools already have a degree of autonomy when it comes to the creation of study programmes.

“Employers can now directly enter universities and create student profiles,” said Kanovská. “We expect a more intensive and effective participation on the part of employers in determining what kind of graduates they want to have on the market.”

AmCham has been involved in the change of university curriculum for a long time, emphasising that universities must be “open and closer to business”, according to AmCham Executive Director Jake Slegers. It was legislative measures in the field of labour and tax regulations that have worsened Slovakia’s competitiveness, he said.

“We understand that some of the measures adopted by the government might have a positive influence on state finances, but this comes at the price of losing attractiveness compared to neighbouring countries,” Slegers said as cited by TASR. “A lot of these measures are having an immediate impact, but many are of short-term effect and, more importantly, ill-advised, as longer-term impacts for Slovakia within the next 10-15 years have not been taken into account.”

Slegers welcomed the option to issue longer term work permits for top notch employees from third countries. However, he finds it disadvantageous that Slovakia offers no exemptions for highly educated workers, who could have trained top notch employees at home and so prevent the brain drain from Slovakia.

“This is extremely important for companies that have been established here and have long-term been lacking top-notch employees,” said Slegers.