MORE THAN 100 people gathered at a protest rally organised by the Slovak Academy of Sciences (SAV) at its premises in Bratislava’s Patrónka area on May 26, calling for the institution to be allowed to continue to run itself and for its possible liquidation to be prevented, the TASR newswire reported. 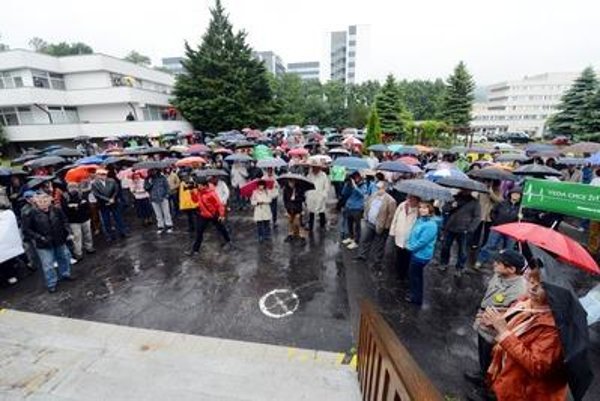 “SAV has found itself in a situation that could endanger its further activities,” reads a joint statement of SAV representatives, as quoted by TASR. “This has been caused by an infringement on the part of the Board of Advisors to the Prime Minister concerning a legislative proposal on public research institutions that includes an amendment to the law on SAV.”

SAV fears that according to the aforementioned proposal, the education minister would be able to decide on the future existence of the academy’s institutes without publishing criteria or providing any opportunity to appeal against such a decision.

“An institution whose transformation project would be unacceptable for the minister would cease to exist. We consider this to be a loss of autonomy for SAV,” SAV Chairman Pavol Šajgalík said, as quoted by TASR.

SAV representatives stated that they clearly support the initial proposal for the legislation tabled by the Education, Science, Research and Sport Ministry approved by the legislative council of the government. SAV at the same time urged cabinet members to okay the original proposal and to reject the amending proposals submitted by the premier’s advisors.

Jaromír Pastorek, the government plenipotentiary for research and innovation, told TASR he did not issue any official statement to the proposal for the amendment. He also said he was not in the position of plenipotentiary, when the inter-ministerial process was going on. The Board of Advisors did comment.

“There were proposals to improve the law. The thing is, to make it better for real,” said Pastorek, as quoted by TASR.

The advisors’ comments concerned issues that included management of SAV’s immovable property as well as abolition of the supervisory board and a cessation of management board in the same way as there is with public universities.

“These proposals are relatively easy to address, it’s nothing critical," said Pastorek, as quoted by TASR. “Nobody has, however, heard any relevant arguments, why it shouldn’t be that way.”